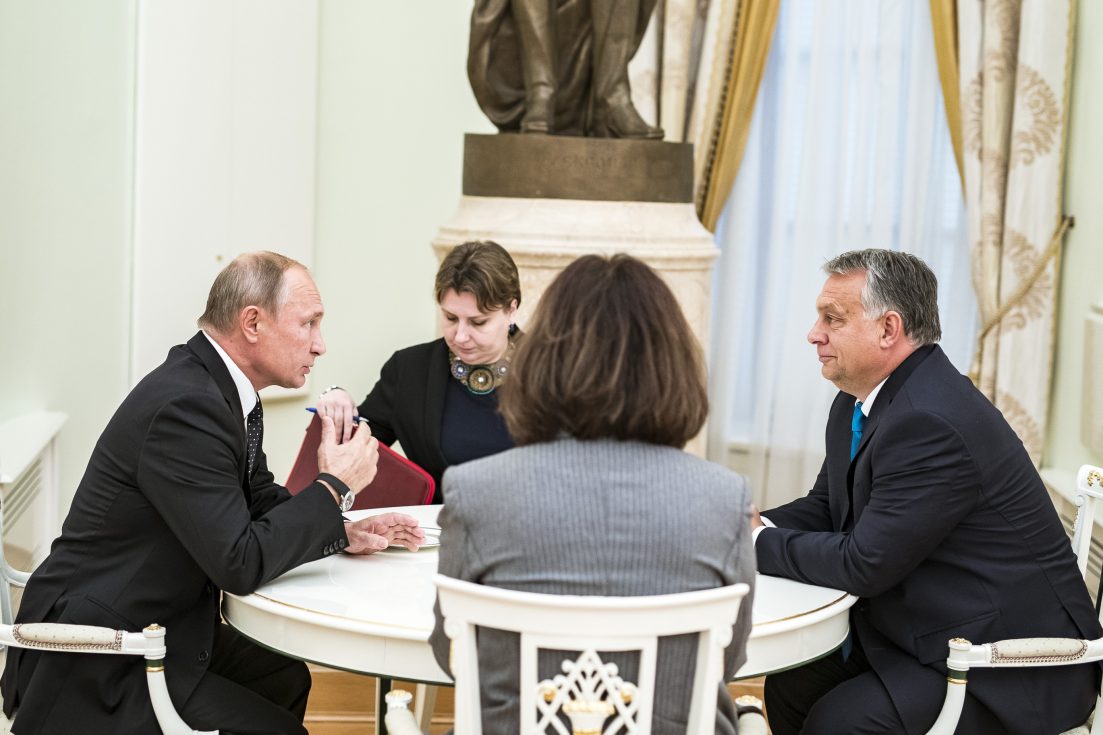 During the September 2018 press conference in Moscow held by Viktor Orbán and Vladimir Putin, the Russian president mentioned a project that dates back several years and concerns the production of 1300 rail cars for Egypt by the two countries. The value of the agreement is one billion euros.

This business is important for the Russians, Putin himself called it „quite significant” at the press conference. But it also matters to the Hungarian government – foreign minister Péter Szijjártó mentioned it as the first one among joint Hungarian-Russian projects when he was in Moscow preparing the next Orbán-Putin meeting.

Direkt36 has found that the investment will favor the Russians even though the Hungarian state will provide the loan for the production of the cars. In addition to the Russians, Hungarian businessmen close to Orbán’s government will also benefit from the project: Hungarian ambassador in London Kristóf Szalay-Bobrovniczky – who has a joint business with Árpád Habony, chief advisor to PM Orbán – recently appeared in the company that won the contract. The company is represented by lawyer Géza Márton Illés, who has ties to András Tombor, a former advisor to the PM.

The project was originally won by a consortium led by the Hungarian company Ganz, but the Hungarian government abandoned them at the last moment and decided to give the state loan guarantee to a competing group led by Russians. This made the bid of Ganz impossible and put instead its Russian competitor, Transmashholding (TMH), into position.

The state-owned Hungarian Eximbank, which is likely to provide the loan to the investment, and the Ministry of Foreign Affairs and Trade cited bank confidentiality reasons for not being able to provide more details. They only stated that the loan would be provided according to the laws and to the benefit of Hungarian companies. Illés told Direkt36 that András Tombor is his long-time „respected client” but it is a wrong to link his law firm to Tombor personally. Ambassador Kristóf Szalay-Bobrovniczky did not respond to our questions

A huge order for a tiny company

The agreement about the production of rail cars was signed in September 2018, one week after the Orbán-Putin meeting. Minister of foreign affairs and trade Péter Szijjártó called it „one of the most significant foreign supply projects of the Hungarian transport industry.” The ministry now told Direkt36 that at that time the government signed a declaration of intent and concluded a trade contract. These provide among other details about the type of cars to be delivered to the North African country.

One of the most remarkable elements of the agreement is the company that signed a contract with the Egyptians. Responding to our inquiry, Transmashholding stated that it was the Hungarian subsidiary of the Russian company – Transmashholding Hungary Kft. – that signed the agreement. TMH, the biggest rail car production company in Russia, had already worked in Hungary, its group member Metrowagonmash, upgraded the M3 metro line in Budapest.

Transmashholding Hungary was set up in July 2016 with a registered capital of 9 thousand euros. Several experts dealing with state-financed export transactions told Direkt36 that they did not see logic in entrusting this small company with a one billion euros worth Egyptian project. In these types of projects more than ten-year long guarantees must be provided for various car elements, so it would have been more rational to contract the production company directly, one of the sources said.

The Egyptian contract was signed more than one year ago. The car deliveries have not started yet but two prototypes were prepared in the Russian factory of TMH and negotiations are ongoing regarding the financing since Egypt needs a loan to purchase the cars. This loan is planned to be provided by Eximbank under the supervision of the Hungarian Ministry of Foreign Affairs and Trade.

Eximbank is a state financial institution which supports the export activities of Hungarian companies. It can take part in the Egyptian investment if the Hungarian added value in the project reaches at least 50 percent. According to the government’s plans this condition would be fulfilled if the Russians bring Dunakeszi Járműjavító Kft. company (DJJ), which is in Hungarian majority ownership, to the business.

The idea of the Hungarian state selling DJJ to the Russians came up already at the beginning of the Egyptian tender in 2016. This May, the government issued a decree that selected the daughter company of Transmashholding Hungary Kft. as the buyer and set the date for closing the purchase of DJJ until the end of June. The buyer did not make a move by the given deadline, however the Russians signaled their continued interest for DJJ. According to a source from the industry who follows the case, the reason for the delay is that the Russians need DJJ mainly because of the Egyptian order, but the purchase would only make sense for them if the Egyptian loan contract is signed.

According to the ministry of foreign affairs, this might happen this year. The text of the loan contract was finalized and it is planned to be signed this year, the ministry told Direkt36. The ministry also stated that the requirement of at least 50 percent Hungarian supply rate will be fulfilled with „producing at least 651 rail cars in Hungary” out of the ordered 1300. English language Egyptian newspaper Egypt Today also reported that according to the contract 650 rail cars will be supplied from Hungary, 500 will be delivered by Russia, and the remaining 150 will be manufactured by Egypt under the supervision of the Russian Transmashholding.

This labor division surprised several experts who have worked in similar state-financed projects and have knowledge about the process of rail machine production. According to them, usually all members of the consortium take part in the production of all cars in these types of projects.

„I have not seen a contract like this, this is economically irrational,” one of the sources said regarding the production of the same cars parallel in different countries. Another source was more understanding and said that the high number of cars might justify this construction scheme but added that it would have been more logical for the consortium partners to jointly participate in the car production.

According to them, this labor division could cause problems because the consortium is dominated by the Russian party. The Russian TMH is a significantly bigger company than the Hungarian DJJ, and the car design is also prepared by the Russians. Therefore, cars manufactured in Russia are not likely to have a high Hungarian added value. According to one source this is like the Hungarian Eximbank would be financing Russian export.

This means that it will be up to the cars produced in Hungary to secure the 50 percent Hungarian supplier added value. However, DJJ is not able to produce all car elements on its own. It has to purchase them from Hungarian or foreign suppliers.

Eximbank told Direkt36 that if a product is manufactured in more countries, then the country of origin is the country where „the last significant, economically justified” work is being done. In case of machine production this means putting the cars together. This means that only those cars will be considered of Hungarian origin which will be put together here. Eximbank did not answer more questions citing bank confidentiality reasons. The ministry of foreign affairs stated that Eximbank’s financing condition is that at least half of the products will be of Hungarian origin, and this condition will be met.

The shadow of Árpád Habony

The involvement of people behind the Transmashholding Hungary Kft. also raises questions about the project. According to company data, the company is legally represented by Géza Márton Illés Law Firm. Illés’ law firm has already worked for the Russians, it represented Metrowagonmash when it signed the contract about the upgrade of metro line 3 in Budapest.

Illés’s law firm also represented several other companies where András Tombor, the PM’s former advisor was involved. For example, the lawyer worked for an EU fund management company co-owned by Tombor, the functioning of which was criticized by the European Commission. It was revealed a few years ago that Tombor gave a 60 thousand euros loan to Árpád Habony, PM Orbán’s chief advisor.

Illés does not only cover legal tasks around Transmashholding Hungary, he is also the Hungarian legal representative of the Terence Stuart Watson, a Brit who is one of the company’s CEOs. Watson previously led one of the British companies of Alstom and in 2016 the British authorities accused him in a corruption case involving the purchase of Budapest Alstom metro cars, but the charges were later dismissed.

Illés did not respond to our inquiry regarding Transmashholding Hungary referring to confidentiality reasons. He stated about his relation to Tombor that the former PM advisor has been his respected client for more than 10 years. „However, contracts with companies that can be linked to András Tombor, or with Tombor personally have never constituted the majority of the turnover, income of the law firm,” he wrote. Therefore, according to Illés, linking the contracts of the law firm in general to the person of Tombor is a wrong approach.

Since this summer, one of the owners of Transmashholding Hungary is a Hungarian with close ties to Árpád Habony. Hungarian online news portal Index.hu reported that in June that Hungarian ambassador in London Kristóf Szalay-Bobrovniczky purchased a 50 percent ownership in the company. Szalay-Bobrovniczky previously held a leading position in the government-friendly think tank Századvég group, and according to publicly available data, he has no experience in the transport industry.

The Egyptian investment is likely to come up during Vladimir Putin’s October 30 visit to Budapest. Minister of foreign affairs and trade Péter Szijjártó who prepared the visit during his Moscow trip in mid-October named the Egyptian tender as the first one among joint Russian-Hungarian projects.