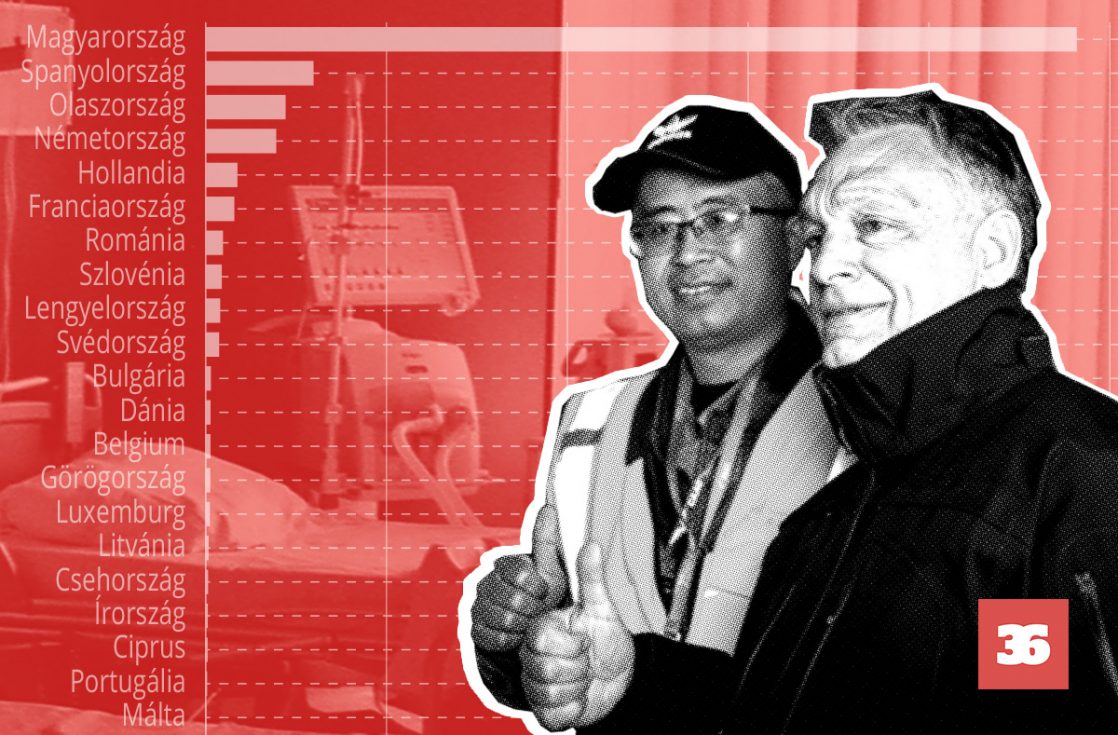 On June 15, a few days before the government lifted the state of emergency due to the coronavirus, Foreign Minister Péter Szijjártó delivered a speech in the parliament and expressed the government’s gratitude to everyone who had helped the fight against the virus. He not only thanked the work of healthcare workers, teachers and police forces, but also praised the government’s performance. He emphasized that despite a huge international competition, Hungary had successfully procured medical devices to help protect against the virus: while in other countries there were “serious tragedies” due to lack of equipment, we “made the necessary steps” in time, and “the air-bridge between China and Hungary functioned well,” Szijjártó said. A month earlier, Prime Minister Viktor Orbán thanked China’s President Xi Jinping over the phone for his country’s contribution to Hungarian efforts in fighting the epidemic.

However, according to international trade data analyzed by Direkt36, Hungary made the worst deals in the entire European Union. Since March, Hungary has been paying the highest price per kilogram for ventilators from China. During the peak of the coronavirus, in April this year, for example, Hungary paid over ten times more than Italy, and over fifty times more than Germany per kilogram of ventilators and associated equipment.

The government acknowledged that it was difficult and expensive to purchase ventilators and other equipment during the epidemic. A secretary of state recently explained that the reason for the high prices was that the quantity did not have a price-reducing effect but a price-increasing effect: if someone wanted to buy more, they had to pay more. However, according to trade data, this is not true: other European countries that bought more ventilators from China than us were able to negotiate a much better price than the Hungarian government.

The Ministry of Foreign Affairs did not reply to our questions about the reason for the huge price difference.

News website 444, however, received the contracts of ventilator purchases from the Ministry of Foreign Affairs. These show that Hungary ordered most equipment, more than 6,000 machines, from a Malaysian company for 170 billion forints (500 million euros).

There have been several problems with the procurement of medical equipment in recent months. For weeks after the virus appeared in Hungary, health workers kept reporting that they did not receive enough protective equipment. Concerns were also raised about the quality of the goods purchased, including tests. It was also revealed that of the big winners of the procurements was a company with family ties to the ministry that handled the procurements. Direkt36 has covered these topics, our coronavirus stories can be read here.

In recent months, pro-government politicians have regularly stressed that the coronavirus has created an enormous competition on the medical device market, and a particularly fierce battle for ventilators. “A significant part of the European Union’s foreign policy consists of constantly criticizing China. Still, in recent months, we have seen that almost all EU member states, almost without exception, have fiercely competed with each other in China to purchase medical equipment,” said Foreign Minister Péter Szijjártó in mid-June in parliament.

These purchases are recorded in trade data sent by all members of the European Union to the community’s statistical office, Eurostat. Member States report on a monthly basis the quantity and value of the products traded with other countries.

Data on different products are not reported individually, but in broader product categories that include several similar products. Ventilators, for example, belong to the product category “9019 20 00 Ozone therapy, oxygen therapy, aerosol therapy, artificial respiration or other therapeutic respiration apparatus.” Eurostat data do not record the exact number and type of machinery purchased by each country, but it shows the amount and value of goods exported and imported in a given product category.

According to Eurostat data, Hungarian imports in the group of ventilators, did not see any increase in the first two months of the year compared to 2019. However, after the coronavirus appeared in Hungary, the volume of goods procured from China increased sharply: Hungary ordered 11.7 tons of equipment in March, 32.9 tons in April, then 175.5 tons in May. Although there were hardly any new infections in Hungary in June, purchases were at their peak at that time: 347.4 tons of ventilators and related equipment arrived from China. In four months, Hungary paid 482 million euros for a total of 567.5 tons of equipment.

We paid the most, while others got more for less money

According to the Foreign Ministry, the large quantity did not bring lower prices, on the contrary: “if someone wanted to buy more, they had to pay more,” Péter András Sztáray, State Secretary of the Ministry of Foreign Affairs responded to a written question, adding that ”human life cannot depend on money.” However, the Eurostat data do not support this claim. Other European countries have managed to get more equipment for a cheaper price than the Hungarian government:

The spread of the coronavirus increased the price of medical devices on the international market, but the Eurostat data show that Hungary has been the worst hit by the price increase:

Coronavirus
More in this project 
Direkt36.hu uses cookies, by clicking ‘Got it’ you accept this procedure.
If you need more information on cookies we use, how you can delete or block them, please, see our Privacy Policy.
Got it
