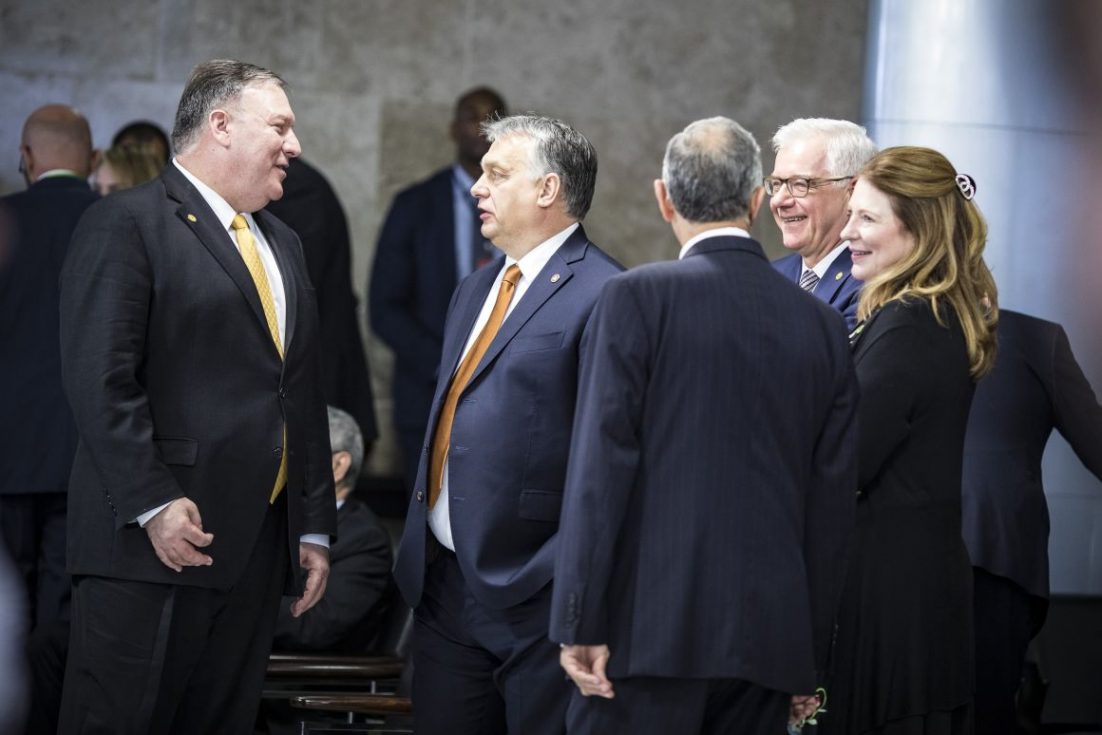 Panyi Szabolcs 2019.02.10. 3 Comments
Have a good story? Contact us!
In collaboration with

Hungary and the United States are preparing to conclude several significant military agreements, Direkt36 learned from sources familiar with the negotiations. This is one of the reasons for U.S. Secretary of State Mike Pompeo’s visit to Budapest on February 11, Monday, which will be the first stop of Pompeo’s round trip to Central Eastern Europe. U.S. strategy behind the tour is to rebuild and strengthen relations with Central European allies.

Pompeo and Hungarian partners are expected to announce that Hungary and the United States will soon agree on a Defense Cooperation Agreement (DCA). This is the bilateral defense treaty that has led to serious political tensions between Washington and Budapest in recent months.

In addition to the DCA, there are advanced negotiations on several military-economic deals. The United States would give money to develop the military airport in the city of Kecskemet, and Hungary would buy an American anti-aircraft missile system.

Could the U.S. launch military attack from Hungary?

Direkt36 had previously obtained a Hungarian diplomatic cable from December. It revealed that the Orban government is reluctant to sign the DCA, the treaty which sets the rules for U.S.-Hungarian military cooperation in Hungary. The disagreement is about the so-called general mandate, which would allow U.S. troops to move freely on Hungarian territory without further authorization from Hungary’s parliament.

On February 6, during Hungarian Foreign Minister Peter Szijjarto’s visit to Washington as well as in following days, significant progress has been made, Direkt36 has learned from multiple sources familiar with the negotiations. Yet, few weeks ago prospects were grim. At the end of January, Hungarian Deputy Foreign Minister Levente Magyar told U.S. European Command (EUCOM) Ambassador Philip T. Reeker that the Hungarian government still has reservations about the U.S. proposal.

Citing the example of Yugoslavia’s NATO bombing in 1999, Magyar said that he thinks it could put the country in danger if the United States could launch military attacks from the territory of Hungary without special Hungarian authorization. U.S. officials say this fear is unfounded, having long worked out with other countries (like the U.K.) how to deal with such cases.

There are still intense discussions about a dozen of open chapters of the DCA according to our sources. Hungary insists on clarifying the issue of Hungarian sovereignty in a reassuring way, in exchange for all the other less important issues (customs, jurisdiction, etc.). As we reported previously, Szijjarto had talks on the DCA with Wess Mitchell, the Assistant Secretary of State for European and Eurasian Affairs and U.S. Ambassador to Hungary David Cornstein, as well as with the U.S. chief negotiator for the DCA a representative of the U.S. Department of Defense on February 6.

U.S. government officials say that Hungary is playing into Russia’s hands by weakening the DCA cooperation and put pressure on Hungary with the argument that this agreement is also a matter of choice between West and East. Since Viktor Orban came to power in 2010, Hungary’s government has developed visibly close ties to Russia, drawing criticism from its EU and NATO allies. However, according to Szijjarto and his Hungarian colleagues, Hungary’s commitment to the Western alliance is unquestionable, and Viktor Orban also said at the beginning of January that “Hungary is a member of NATO and an ally of the United States of America. The Hungarian people decided this in a referendum. The goal of the government of Hungary continues to be the strengthening of its existing alliance with the United States.”

Despite the progress in negotiations, signing the DCA on Pompeo’s Monday visit is unlikely, according to one of our sources. In order to sign it, there should be agreement on all chapters as well as a certified Hungarian and English translation of the DCA first. “However, if the deal was not close to done, Pompeo would certainly not come here,” a senior official from the Hungarian foreign ministry commented about the state of negotiations. Another Hungarian source claimed that if talks are going well, Pompeo and Orban will meet again for a dinner on Monday evening.

Pompeo has something is his bag

Even without a signing ceremony, the parties will announce certain other results. U.S. Congress has previously voted for a $55 million support for the development of Hungarian military infrastructure. This military aid is formally part of the European Deterrence Initiative, which is officially aimed at countering aggressive Russian foreign policy and expansion in Europe. According to Direkt36’s official sources, it will be a topic of Pompeo’s visit that Hungarians can finally start developing the military air base in the city of Kecskemet once they have signed the DCA. (The U.S. will not transfer the money until the agreement is concluded.)

Last Tuesday, while assessing the future of the Hungarian Defense Forces in front of senior military officers, Hungarian Minister of Defense Tibor Benko – who will also meet Pompeo – said that the next important development “will be the acquisition of air defense missile complexes and air defense missiles for the Hungarian Defense Forces”. There has been a discussion for long and it has been a priority topic at the U.S.-Hungarian talks of the past few days that the Hungarian government would buy a missile system from a U.S. defense company, according to Direkt36’s information.

The company in question is Raytheon, which has been contracted by Poland and Romania to supply air defense systems in recent years. Romania buys missile defense systems for $395.8 million and Poland buys for $4.75 billion from the company. According to one source, Hungary, unlike Romania and Poland, is probably not buying a missile defense system (countering missiles) but air defense missiles (countering aircraft). “It is logical to buy them as the U.S. was dissatisfied with the fact that so far we only bought weapons from the Germans,” a Hungarian government official said. The acquisition of a U.S. missile system could also complicate Russian-Hungarian relations, as Russia has repeatedly accused NATO of aggression because of the missile systems deployed in Central European countries.

„All military procurement and defense agreements are tied up with something else, as the Hungarians are doing package deals. For example, Hungary is buying Airbus helicopters from the German factory, while the Germans are building a BMW factory in the city of Debrecen. And we do not know about everything, what is attached to which deal”, a diplomat representing an EU country explained Direkt36 while discussing former Hungarian defense procurements. Two sources also told Direkt36 that Hungarian diplomacy would also like to have U.S. defense companies to build factories in Hungary, such as a Florida-based U.S. company (and U.S. Army contractor) manufacturing aircraft parts.

Who invited Pompeo? Not the NGOs!

Pompeo will not hold a press conference with Prime Minister Viktor Orban, but he will hold one with Foreign Minister Peter Szijjarto in the building of the Ministry of Foreign Affairs and Trade, a foreign ministry source told us. Pompeo then goes to the Castle of Buda to negotiate with the Prime Minister.

The Secretary of State is scheduled to meet representatives of at least three Hungarian civil society organizations – the Hungarian Helsinki Committee, the Hungarian Civil Liberties Union and Transparency International Hungary – which regularly criticize the government for deteriorating civil liberties and widespread corruption. A Hungarian foreign ministry official downplayed the importance of that meetings as it is a custom that senior U.S. State Department officials sit down with NGOs, like Hoyt Yee, the former Deputy Assistant Secretary of State for European and Eurasian Affairs did in 2017. “This is not an issue, Hillary Clinton and others have met them too. Let us not forget that we were the ones who invited Mike Pompeo, not the NGOs,” the source continued.

Pompeo will be accompanied by Wess Mitchell, the senior State Department official in charge of the region, which is usual during the Secretary of State’s visits in Europe. Hungary’s government credits Mitchell for being the driving force behind closer U.S.-Hungarian relations, hence he will receive some high-ranking Hungarian state medal after he leaves the U.S. government by February 15. “This man has done a great deal for Hungarian-American relations,” a Hungarian government source told Direkt36 about the award, and recalled that after her departure, former U.S. Ambassador to Hungary Colleen Bell was also awarded. She received the Commander’s Cross of the Order of Merit of Hungary. According to one of our Hungarian sources, Mitchell could receive the Officer’s Cross.

Mitchell will not take the medal now – it would look strange in the middle of a tense series of negotiations –, but Peter Szijjarto or someone else will give it to him on a later visit to Washington, according to our foreign ministry source.

The Hungarian Ministry of Foreign Affairs and Trade did not answer our questions on the developments of the DCA and other negotiations.