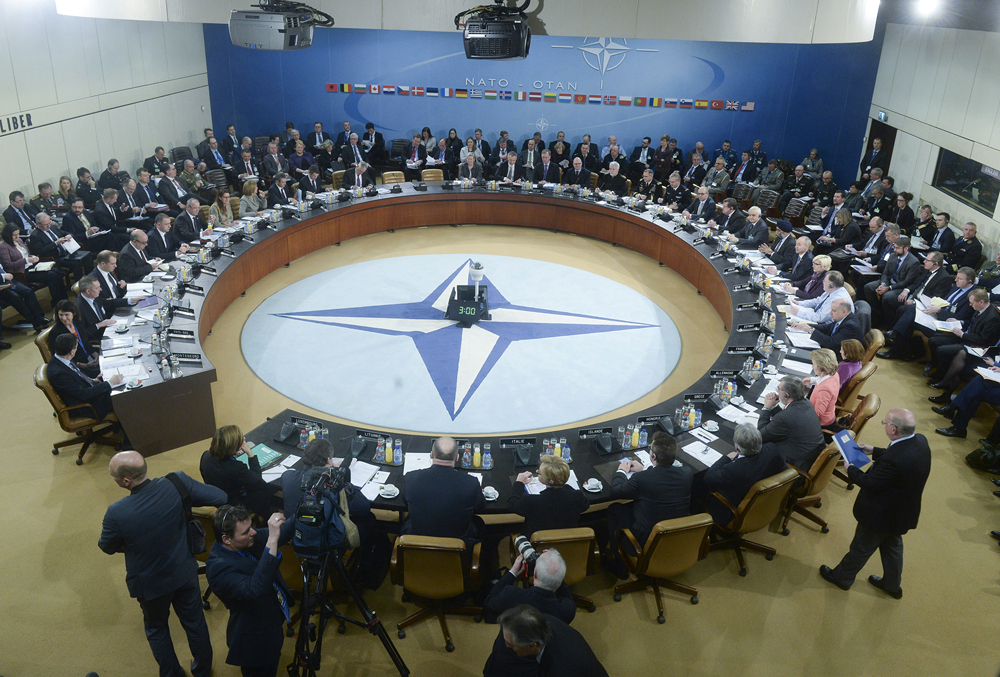 Panyi Szabolcs 2020.02.13. 7 Comments
Have a good story? Contact us!
In collaboration with

A dozen NATO member states have called on the Hungarian government in Budapest to stop blocking high-level meetings of the NATO-Ukraine Commission (NUC) in a debate over Ukraine’s Law on Education, Direkt36 has learned. On Thursday, February 6, senior diplomats accredited to Budapest walked into the Hungarian Ministry of Foreign Affairs and Trade, delivering a prepared message to one of the deputy secretaries of state receiving them. Their action was intended to exert pressure, one day ahead of Minister of Foreign Affairs Peter Szijjarto’s visit to Kyiv and one week ahead of NATO’s Defense Ministerial meeting on February 12-13 in Brussels.

The conflict erupted after the Ukrainian parliament adopted a law favoring Ukrainian language in schools, which according to critics, would suppress minority language education in the country. Although the law was introduced to suppress the Russian language, it also negatively affects Hungarian language education. Due to this, the Orban government began vetoing official ministerial-level talks with Ukraine within NATO. Subsequently, the Hungarian-Ukrainian relationship became so strained and multi-faceted that it became a topic even in the impeachment process against U.S. President Donald Trump (Direkt36 has previously reported on its background).

Among the larger NATO members who took part in last week’s protest were the United States, the United Kingdom, France, Germany, Canada and Spain, but also the Netherlands, Denmark, Norway, Romania and one of the smallest member states, Estonia. At the meeting, however, no common ground was found with the representatives of the Hungarian government, but a tense debate broke out. Direkt36 has learned about the details from representatives of four participating member states as well as from Hungarian foreign ministry officials.

According to them, the Hungarian counterparts, including the Deputy Secretary of State for Security Policy, were apparently surprised by the joint action of the NATO allies. The Hungarians “reacted that unless there was similar action and pressure on the Ukrainian side from the same countries in Kyiv, the Hungarian government would ignore this action.”

“Of course, whenever they consider it important, we sit down with our allies for discussions, as it happened in the occasion that you mentioned. Our position is clear and unchanged from the start: we would like to re-support Ukraine’s Euro-Atlantic integration – we were already vocal supporters of the process – and we will do so as soon as the issue with the education law and language law is settled in a way that is reassuring to the Hungarians in Transcarpathia,” Hungary’s Ministry of Foreign Affairs and Trade replied to Direkt36’s inquiry.

Allies are starting to lose patience

Last week’s diplomatic action showed growing pressure within NATO over the Hungarian government’s conflict with Ukraine. The most influential NATO allies are beginning to lose patience, Hungarian and foreign sources explained. An Estonian government official said they were also worried about the Hungarian veto and had repeatedly tried to persuade the Hungarian side to try to resolve the dispute directly with the Ukrainians, not through NATO. This was also the main message of the diplomats during their visit to the ministry last week. Besides the timing, diplomatic sources mentioned three reasons behind this joint action of NATO allies.

The first reason is that, according to critics of the Orban government, Ukraine, which is struggling with Russian aggression, is much more the victim of the protracted debate than the Hungarians of Transcarpathia. Second is that they believe the Ukrainian side has been more open to resolving the issue since the Zelensky administration took office, while the rigid position and aggressive communication of the Hungarians suggests that Budapest may not really want to reach an agreement.

The third reason is that many view the real intentions of Hungary as being Russian-serving rather than protective of Hungarian minorities. Several EU diplomats interviewed by Direkt36 have referred to the Ukrainian issue as part of a series of problems, which also include the relocation of the Russian-based International Investment Bank (IIB) to Budapest, the Paks nuclear expansion or the long-term gas contract announced with Gazprom.

Hungarian foreign ministry sources have also acknowledged to Direkt36 that the Russian-friendly image and bad international reputation of the Orban government weakens their diplomatic position in the Ukrainian-Hungarian dispute. According to these sources, this is the reason why protesting NATO members trust Kyiv more than Budapest.

“NATO is not the place to resolve bilateral disputes, and we disagree with blocking high-level engagement between Ukraine and NATO given the ongoing war there,” the U.S. Embassy in Budapest replied to our inquiry on last week’s joint diplomatic action. According to the Embassy, “as Secretary Pompeo has said, we must not let Russia drive wedges between friends in NATO, and Hungarians know all too well from their history that an authoritarian Russia will never be a friend to the freedom and sovereignty of smaller nations.”

During an online video briefing, U.S. Permanent Representative to NATO Kay Bailey Hutchison, who arrived to Brussels for the NATO ministerial meeting, answered Direkt36’s question on the Hungarian-Ukrainian debate. She said that they want Ukraine to participate with its defense minister in NATO ministerial-level meetings and “we hope very much that Hungary will work with us to allow that to happen.” Hutchison claimed that outside of NATO they support Hungary to protect the rights of its minorities, but Ukraine is “very much in need of our help right now.”

“We’re not blocking just for fun”

Last Friday, the day after the diplomats’ surprise visit to the Ministry, Hungarian Minister of Foreign Affairs Peter Szijjarto traveled to Kyiv with a new set of proposals to negotiate. For example, he suggested that, like the Crimean Tatars, the Hungarian minority be given indigenous status, which would exclude them from the scope of the new law on education. Ukraine’s Minister of Education rejected the proposals, but at the end of his visit, Szijjarto nevertheless made much more moderate statements than usual.

“The Ukrainian Minister of Education was participating at all of the talks but did not seem willing to compromise,” a Hungarian foreign ministry source familiar with details of last week’s talks in Kyiv told Direkt36. Another Hungarian official pointed out that although Zelensky’s new Ukrainian leadership shows more openness, the Ukrainian foreign ministry apparatus did not change much compared to former Ukrainian President Petro Poroshenko’s period, nor did the education ministry’s bureaucracy. The new Minister of Education, Hanna Novosad, was also a high-ranking official responsible for international education affairs during the Poroshenko administration, which campaigned with a nation-building agenda and adopted the controversial Ukrainian education and language laws.

To remedy the debated minority rights section of the Ukrainian Education Act (§ 7), the Venice Commission has developed certain recommendations. The Ukrainian government claims that they have fully adopted these recommendations, but the Hungarian government questions this. According to a Hungarian foreign ministry source familiar with the details of the debate, two specific changes have taken place. The application of the debated provisions, which would restrict the use of minority languages, has been temporary postponed until 2023 regarding EU languages, which includes Hungarian. In addition, private schools are now excluded from the scope of the Act, on the proposal of the Venice Commission.

However, the Hungarian government does not see any substantial change. According to Hungarian fears, postponing the entry into force of the law will only mean that there is a constant threat to the Hungarian minority and that it could be used for blackmailing. “Our ambassador friends in NATO who are sometimes so sensitive about minority rights are now supporting open and plain discrimination,” a Hungarian foreign ministry source lamented.

After the Zelensky administration took office last year, it seemed that the dispute could be resolved. However, by the end of the year, tension escalated again. Several sources claimed this was due to reasons within Ukraine. “There are far more important issues now in Kyiv than this. Right now, Zelensky’s people cannot make concessions in the language issue, not when the extreme right has such a strong influence, only after they manage to weaken them,” an EU official in charge of Ukrainian affairs told Direkt36.

Among other things, the source referred to the arrest of a well-known nationalist, once even praised by former Ukrainian President Poroshenko, who is charged with the murder of Belarusian journalist Pavel Sheremet. Nationalists committed to the Ukrainian language and education laws are very influential, and for the time being, the new Ukrainian administration cannot afford to show weakness in the debate over these laws. A Hungarian foreign ministry source even added that they thought that the Ukrainian leadership could try to use the education law to strengthen its position in recently relauched talks with Russia.

Additionally, the Hungarian government is also not willing to give up its veto within NATO. “Our position is well known by our allies and we hope that it is important for them as well that Ukraine adheres to its annual NATO Preparation Plan and the EU Association Agreement. Both documents clearly protect the existing rights of national minority communities, including the use of their mother tongue,” Hungary’s Ministry of Foreign Affairs and Trade stated on our request. “We do not block Ukraine’s integration process just for fun, but because we have no other means and we do not sacrifice the Transcarpathian Hungarians on the altar of geopolitcal games,” the ministry wrote.

According to a foreign ministry source, the Hungarian government started to use the example of West Germany to counter those who oppose linking NATO with minority rights. Indeed, in 1955, Denmark also used the NATO accession of West Germany to force the settlement of the situation of the Danish minority in Germany, and the attempt was a success.