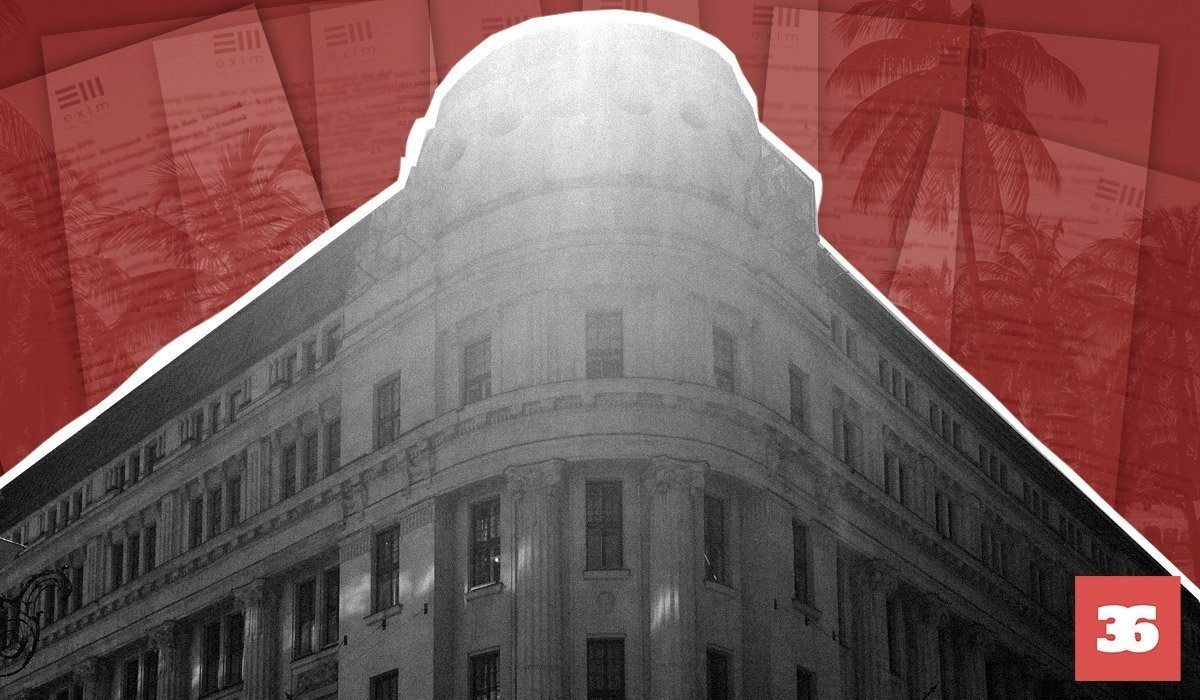 This summer, Hungary’s state-owned Eximbank provided a 29,000 euros financial support to a golf association, which operates at a property maintained by Lőrinc Mészáros, Prime Minister Viktor Orbán’s childhood friend, in the vicinity of the Orbán family’s manor in Fejér county.

The financial support, through which Mészáros is connected to yet another state transaction, was not in line with Eximbank’s goals, since the original aim of this bank is to facilitate export activities of Hungarian companies. Nevertheless, in the past years Eximbank has provided loans to various real estate projects, often linked to friends of the Prime Minister.

Little has been known so far about the background of these loans, however, Direkt36 has now obtained an internal document about a several million euros domestic loan transaction from 2015. This showed that the bank, which is overseen by the Ministry of Foreign Affairs and Trade, decided to join the project despite several concerns.

In the summer of 2015, the state-owned financial institution approved a 35.5 million euros loan for the purchase and renovation of the Váci1 department store located in downtown Budapest. According to the concept, the buyer – Hungarian privately-owned construction company DVM group – would repay the loan from property lease income. However, the more than 50-page-long submission document prepared for the bank’s management revealed several risks related to the project.

The loan required a 11 million euros own contribution which was partially provided by an offshore company. However, at the time of the loan evaluation, the bank did not possess information about the offshore company’s ownership and there was uncertainty also about the size of the property, the purchase of which it was about to finance.

DVM told Direkt36 that they are an engineering company group with no ties to politics and only an insignificant part of their revenues comes from state budgetary resources. They also added that during the loan approval they were mainly in contact with the commercial UniCredit Bank, Eximbank’s consortium partner, and they had no information about the agreement between the two financial institutions.

UniCredit stated that our questions were subject of business and bank secrecy and therefore could not provide further information. Eximbank did not respond to our inquiry.

Eximbank was originally established in 1994 to assist Hungarian export-oriented companies. However, a 2014 legal amendment related to the bank’s operations expanded its activities and allowed the bank to finance domestic investment projects too if they “improve the international competitiveness” of the supported company.

According to a source with knowledge of the bank’s operations, the aim of the amendment was to allow Eximbank to provide loans to companies in order to develop their Hungarian capacities and thus increase their export activities. “With a twisted logic this then led to the financing of hotels, citing a connection to tourism,” the source said, referring to several hotel projects of government-close businessmen which Eximbank in the past years has supported with loans worth of millions of euros.

However, Eximbank provided loans to other domestic projects unrelated to export development too. In particular, the financing of the Váci1 department store in Budapest is one example of this practice. There were media reports on the project in 2016 already, but the amount that was disbursed and the details of the loan were unknown until now.

A luxury property with state support

The real estate involved is located at the corner of Budapest’s prominent Vörösmarty Square and the beginning of Váci shopping street. Since its previous owner was unable to pay the loans, the building was transferred into the ownership of the commercial UniCredit Bank in 2015, which then announced a tender to find a new buyer.

This tender was won by a construction company called DVM group. Its majority owners are two Hungarian private individuals, Attila Kovács and Balázs Czár. Although they are not public figures, the company has already profited from a state-linked business transaction. DVM renovated a Budapest landmark called Eiffel Palace, later sold to the National Bank of Hungary. The property’s 2014 sale received high media attention for its extraordinarily high price of 57 million euros. It was also in the news because the National Bank purchased the building from a company linked to DVM which was at that time owned by two offshore companies registered in the Lesser Antilles and Cyprus.

Similarly to the Eiffel Palace case, the business opportunity with Váci1 department store found DVM group thanks to a state actor. The group’s project company called Horizon-Efpartners needed a loan to purchase the property. Therefore, in June 2015 Eximbank proposed to provide a 35.5 million euros loan to finance the purchase of the Váci street real estate, based on documents obtained by Direkt36.

According to a submission document prepared for the bank’s management in July 2015, this was considered an investment loan to improve competitiveness, provided with favorable interest rates, and the document classified it as state support. Nevertheless, the document did not specify the reason why the bank wanted to provide state assistance to DVM for a real estate purchase.

Since the property was owned by UniCredit, the commercial bank decided it wanted to take part in the financing construction. According to the agreement, one half of the loan was provided directly by Eximbank and the other half by UniCredit, with refinancing from Eximbank. This means that UniCredit took a loan from Eximbank in order to provide the other half as a loan to DVM. This is not an unusual practice in the financial sector and serves the aim to divide the risks between two banks. UniCredit became both the transaction organizer and the account holder.

However, the submission does not refer to the loans as Exim- and UniCredit loans, instead, it speaks about one bigger and one smaller loan. The bigger loan consists of the total 17.75 million euros from UniCredit as well as one part of the Eximbank loan in the amount of 12.25 million, altogether 30 million euros. In addition, there is the 5.5 million euros loan also coming from Eximbank listed as the smaller loan.

The financing construction had put UniCredit into a more favorable position, since the loan repayment schedule was agreed in a way that the commercial bank was supposed to receive the repayment of its loan earlier than Eximbank.

Money flowing from the Lesser Antilles

The state-owned bank was generous with the DVM group too. The three-point scale risk assessment included in the submission revealed several moderate risks related to the project. However, Eximbank did not necessarily tried to clarify all of them ahead of deciding on the loan.

The document considered it a “negative” that the 11 million euros own contribution, making up 23.66 percent of the whole investment, was partially provided by a Hungarian company B-Lake Pro Invest, which had an offshore background. Its sole owner was Stringston Ltd. registered in the Lesser Antilles.

Offshore companies, which are often registered in exotic countries, are used in general for two purposes. One of them is for minimizing the tax burden on income that a company or a person makes in other countries. Since the ownership data of these entities are in most cases very hard to access, these companies are also used for hiding assets or conducting shady businesses. It is because of these two characteristics that even though owning or using offshore companies is legal there have been major international efforts to crack down on their use.

Even though the submission considered the role of an offshore company in the own contribution a moderate risk, Eximbank’s management did not insist on finding out the owner of the company. A statement about the real owner was a requirement only for the loan disbursement.

DVM stated that B-Lake Pro Invest provided a smaller part of the own contribution in the amount of 2.2 million euros, which DVM received as a loan. They added that the company registered in the Lesser Antilles is owned by a Canadian private individual who visited Hungary once, at UniCredit’s request for identification.

Just about paying the loan

The submission assessed the return on investment as a moderate risk too. DVM planned to repay the loan from the property’s incoming leasing fees – at the time when the decision about the loan was made, Hard Rock Café and Szamos Marcipán confectionary shop were already tenants, while H&M also signed a lease contract, and DVM agreed to use the real estate’s offices too.

Even though the submission does not mention it, but, according to financial experts consulted by Direkt36, banks in general do not like it if the company receiving the loan is simultaneously the tenant. The reason for this is that the company might lease the property to itself for below the market price, which runs against the bank’s interests. According to DVM, this was not a problem in their case as they rented the offices for a market price and long-term. They added that the company’s own lease contracts covered only 10 percent of the whole building, which in their opinion was not a significant ratio.

According to Eximbank’s calculations, income from these four lease contracts would have “just about covered” the various costs and loan payments. Therefore, the building’s “renting to the greatest possible extent and as soon as possible” was extremely important for the bank, and DVM agreed to lease a certain percentage of the property area.

DVM clarified to Direkt36 that the 31,000 square meters were incorrect data and the size of the usable area (14,128 square meters) referred to the pre-reconstruction status and the size of the rentable area (15,400 square meters) the post-reconstruction status. They stated that the building evaluation took longer than expected and the final area was determined only at the finalization of the implementation plans. They also added that there was only a one-two percent difference between the square meters during the loan negotiations and the final data which were based on assessments at a later stage.

Eximbank considered the budget for the building’s renovation also a moderate risk. DVM planned to use 8.2 million euros for the renovation, among others for rearranging certain areas of the property based on H&M’s requests. However, the implementation itself made up only a smaller proportion of the renovation budget.

“It is a negative that approximately 60 percent of the budget is soft cost,” which is of significant proportion, the Eximbank document stated. Soft costs are costs not directly related to the renovation. The document considered the several thousand euros lease contribution to H&M, the 0.8 million euros “other costs” for marketing and expert fees, and the 0.65 million euros various fees paid to members of the DVM group as soft costs. Eximbank experts therefore recommended the budget’s review before the loan disbursement.

The building ends up in German hands

In the end, Eximbank and UniCredit approved the loan disbursement. Documents available in the court registry showed that in September 2015 the two banks registered a lien claim on Horizon Efpartners, the project company that took up the loan. They also confirmed the 30 million euros and 25 million forint bigger loan from UniCredit and Eximbank, as well as the 5.5 million euros smaller loan from Eximbank.

The lien claim was removed a year later, in the autumn of 2016, when the company owning the property and taking up the loan was purchased by Patrizia Immobilien, a German company dealing with real estate investment in several European countries, which, according to financial reports, repaid the loans of Eximbank and UniCredit. We sent an inquiry with questions to Patrizia but received no response.

DVM did not disclose any details about the purchase price but they confirmed the transaction brought profit.