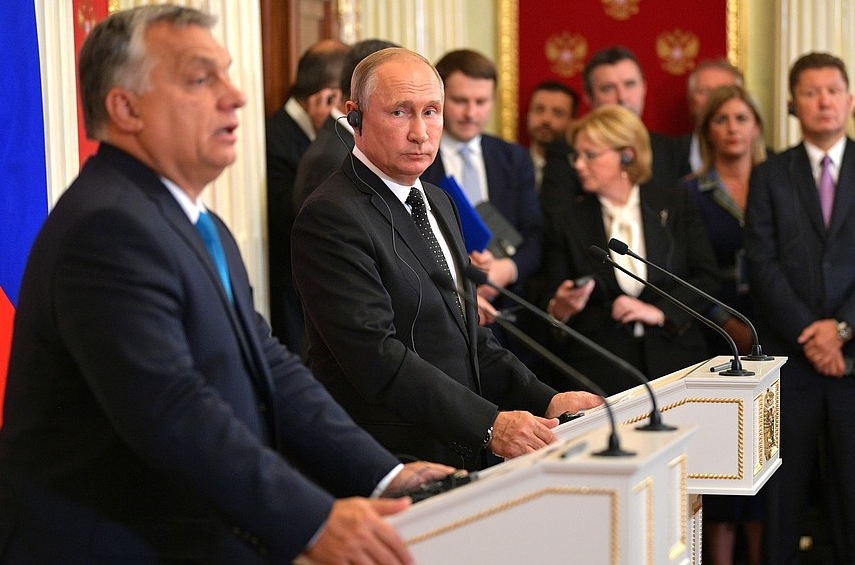 One year ago in September, standing next to Russian President Vladimir Putin at a press conference in Moscow, Prime Minister Viktor Orban started talking about an institution that was hardly known at the time. “As the third largest shareholder of the International Investment Bank, Hungary stands ready to host this bank in Budapest, and for its headquarters to be relocated to Budapest. I ask the President that the bank’s management and its board consider the Hungarian proposal,” Orban said.

In the summer of 2019, this Russian-led bank with close ties to Russia’s political elite moved to Budapest. According to Hungarian government sources, the bank’s relocation will be one of the topics discussed in the October 30th meeting between Orban and Putin in Budapest. However, it may not be brought up as a clear success story.

In the spring, Hungary’ government created the legal conditions necessary for the IIB to operate in Hungary. This law, sponsored by the Minister of Finance, stipulates that much like the staff of other international financial institutions, IIB staff in Budapest will enjoy broad diplomatic immunities. However, the Hungarian government will not follow the new law. According to information obtained by Direkt36, this is due to a deal with the United States. This is another example of how the Orban government is forced to balance between the interests of Washington and Moscow.

The IIB’s relocation to Budapest was completed in the summer and all the bank’s executives have arrived in Hungary. We asked the IIB how many of its officials already obtained diplomatic status, but the bank’s director for communications said the answer was “publicly available information”. They recommended we search the online database of Hungary’s Ministry of Foreign Affairs and Trade, that lists all diplomats accredited to the country.

According to the database maintained by the ministry’s Protocol Department, the Hungarian government has so far only accepted the accreditation of IIB chairman Nikolay Kosov. In the middle of the summer, a Russian IIB official told Direkt36 that their other employees’ applications are likely to be pending. However, diplomatic immunity has not been granted to anyone besides Kosov, although it does not normally take months for the ministry to issue such licenses.

The public list of accredited diplomats was updated at the end of October with countless other foreign diplomats arriving in late summer or autumn. However, in the case of IIB, the only change since the summer is that Kosov’s wife also appeared on the list. But this is only a formality, since diplomatic immunity also applies to close family members.

Delays are not accidental. According to information obtained by Direkt36, corroborated by an official U.S. Department of State letter, U.S. Ambassador to Hungary David Cornstein requested and received assurances from Viktor Orban to mitigate U.S. concerns over IIB. The United States fears that the Russian state may take advantage of the bank’s diplomatic immunity and use this institution for spying. Although U.S. diplomacy could not prevent the IIB from moving its headquarters to Budapest, it apparently did not give up on trying to restrict the bank’s room for maneuver.

A source familiar with the Cornstein-Orban deal, asking for anonymity because of the sensitivity of the topic, told Direkt36 that it is expected that bank officials who are nationals of IIB shareholder EU and NATO member states, not Russians, will be granted diplomatic status. The bank’s leadership includes Czechs, Slovaks, Bulgarians, Romanians and Hungarians, but the United States only has a problem with Russians and their diplomatic immunity.

Hungary’s Ministry of Foreign Affairs and Trade did not react to our inquiry about diplomatic accreditations.

The lack of diplomatic accreditations supports earlier information by Direkt36. Back in the summer, we reported that U.S. Ambassador David Cornstein made a deal with Viktor Orban after returning from the May 13th visit to the White House. According to the deal, IIB cannot pick a location for its offices in Budapest near the embassy of the United States or any other NATO member country. They also agreed that IIB would not automatically receive the promised diplomatic immunities either. Later, Cornstein also told a U.S. congressional delegation visiting Budapest that U.S. and Hungarian intelligence services would cooperate in monitoring IIB.

Following the publication of that article by Direkt36, Democratic and Republican senators and congressmen, including Bernie Sanders, sent a joint letter to Cornstein . In this letter, they asked Cornstein to officially confirm what was reported in our article and to elaborate on his deal with Orban. We have now obtained the reply to this letter. The reply was sent on October 1 by an Assistant Secretary of State in charge of legislative affairs at the U.S. Department of State, which employs Cornstein.

According to this State Department letter, “Ambassador Cornstein and other U.S. officials urged Hungary against the relocation of the International Investment Bank (IIB) offices to Budapest. They warned it could be an instrument for Russian malign influence in the region. As the relocation moved forward, Ambassador Cornstein worked to secure assurances from the Hungarian government to mitigate such concerns. Further details about those assurances would need to be conveyed in a closed briefing, as would any discussion of possible intelligence assessments, activities, or cooperation.”

The letter also brings up another delicate topic that the New York Times wrote about earlier. This is the re-launch of the Hungarian broadcast of Radio Free Europe (RFE), which is funded by the U.S. government. Earlier, the New York Times reported that Ambassador Cornstein, who maintains a close relationship with the Hungarian government, exceeded his authority and tried to prevent RFE from dealing with politically sensitive issues. The official letter indicates that the U.S. Department of State is fully supportive of the launch of RFE’s Hungarian broadcast, that will “further diversify Hungary’s information environment”. The letter also states that “the U.S. government is seeking to increase efforts to combat corruption and to promote pro-American voices”.

Become a supporter of Direkt36 if you liked this article!