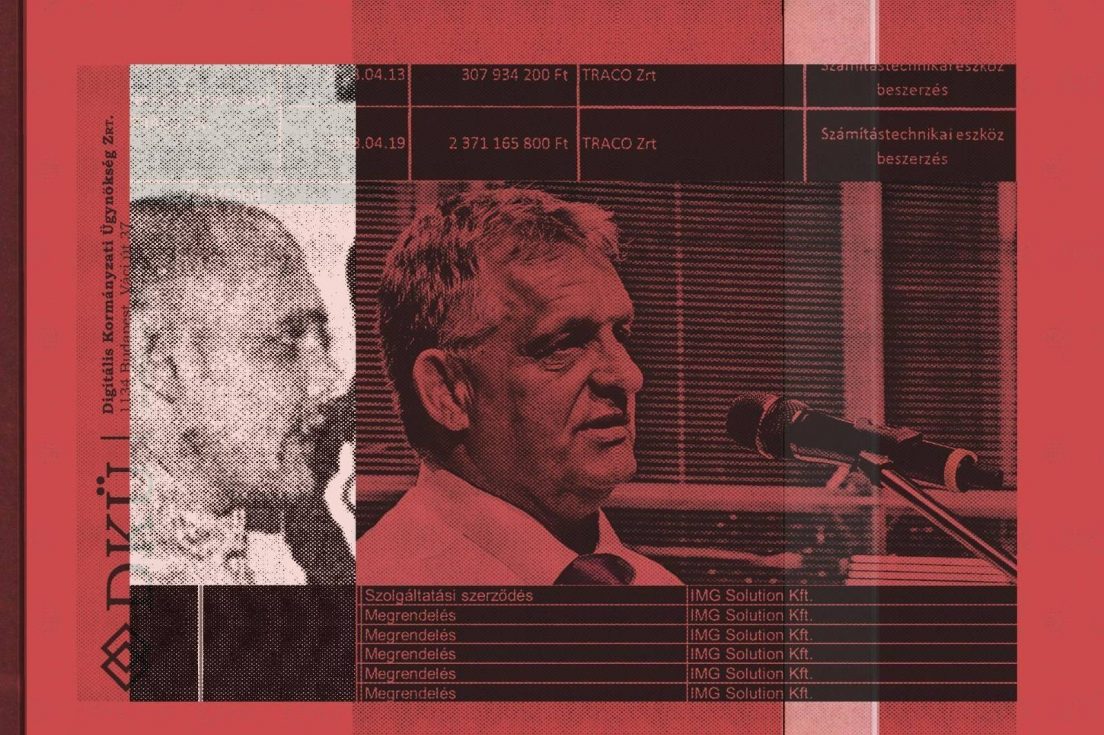 Information technology businessman Gábor Szentgyörgyi has had close relations to Viktor Orbán’s family for a long time now. It started with a connection to Győző Orbán junior, the prime minister’s brother, through wrestling, then he showed up in the company of the prime minister and his father, Győző Orbán senior in a football stadium, and most recently they have also developed business ties, as one of Szentgyörgyi’s companies set up a new factory on the property of the Orbáns’.

In the meantime, thanks to his other companies, Szentgyörgyi has become one of the most successful players in the public IT tenders. As Direkt36 has shown earlier, his flagship company, named IMG Solution, had produced 100-fold growth between 2013 and 2018 by winning one state order after the other.

Help us tell the truth in Hungary! Join our membership program now.

The rise of Szentgyörgyi’s group has continued since then. IMG Solution consistently won governmental purchases in the last three years as well – from state actors like the MÁV Group (Hungary’s railway corporation), or the NAV (National Tax and Customs Office). The venture also got into several framework agreements in the value of some ten billion forints (10 billion HUF is approx. 27 million Euros). This means that Szentgyörgyi’s companies are part of the pool from which state institutions – like ministries, hospitals or national offices – can purchase their IT devices and services.

The empire of Szentgyörgyi’s businesses has extended with new companies in the last couple of years. The most salient from these is named Traco, which Szentgyörgyi took over in 2019. The company has kept winning public tenders since then.

Szentgyörgyi has six companies that are often found amongst the winners of these tenders. The companies together have made an income close to 14 billion Hungarian Forints (approx. 38 million Euros) in 2019 and 2020, and their profit was above one billion (about 2,7 million Euros) in both years.

We sent questions to Gábor Szentgyörgyi and Győző Orbán junior as well, but none of them replied.

The rise of IMG and the wrestling connection

Gábor Szentgyörgyi, 40, founded IMG with two of his business partners in 2009. Around these times, he was still working for a prominent IT corporation called Bravogroup, which he left when IMG started rising. This coincided with being successful on big state tenders.

Usually, it is decided through several rounds which companies can deliver IT products to state institution. Earlier this progress happened with the control of the Procurement and Supply Directorate, but by today, the task was overtaken by a new body called Digital Governmental Agency, which is overseen by Antal Rogán, the prime minister’s chief of staff. This organisation selects companies with whom they sign a framework agreement, and then individual state institutions – such as government bureaus or hospitals – can order products or services from these selected companies.

As Direkt36 has investigated earlier, information about the connection between Szentgyörgyi and the prime minister’s brother, Győző Orbán junior, started to spread in parallel with the rise of IMG. Several sources working on the IT market told Direkt36 back then that around 2013 their business partners had told them about a new actor on the supply market, and that according to their knowledge, the venture is connected to the prime minister’s brother.

As we have written about it earlier, the first detectable link between Szentgyörgyi and Győző Orbán junior was wrestling. Years ago they had both been practising this sport, and both of them were involved in a sports club that had a wrestling department.

We have also showed that through the years this connection grew stronger. Most recently, we have discovered that a construction company co-owned by Szentgyörgyi set up a factory on a land owned by Viktor Orbán’s family, where, according to documents and sources familiar with the business, they are going to work on plastic conversion.

Parallel with this, Szentgyörgyi’s IT corporation group has reached even higher levels in the last couple of years. His enterprises have gotten into 15 more framework agreements since 2020. Amongst these, there are some with extraordinarily large budgets: in this year’s June they made one in the price of 120 billion Forints (326 million Euros) for instance, while in the end of September another one was made for 200 billion (544 million).

Szentgyörgyi’s companies were selected along with dozens of other companies for the programs, which means that the price of these will be shared between these participants. There is no public data on precisely how much money will be given to Szentgyörgyi’s companies from these agreements, as the Digital Governmental Agency, the institution that centrally should handle the concrete contracts, does not publish any data on these.

Earlier, as a result of a public data lawsuit, Direkt36 managed to get to the details of those IT framework agreements, which IMG Solution participated in between 2013 and 2018. From the altogether 13 agreements, IMG produced a 6,2 billion (16,9 million Euros) income, becoming the 8ths best performing venture from all the 169 that were selected to the agreements.

IMG Solution gets a lot of purchase orders independently from the framework agreements as well. According to tender documentation, the company has been winning contracts in the value of almost 2 billion forints (5 million Euros) since 2019 – sometimes as an actor of consortiums – from government institutions such as MÁV, NAV or KIFÜ – The Governmental Agency for IT Development. Its success shows on its annual income: although the company only made 46 million Forints (125 thousand Euros) in 2012, this amount grew to 10,4 billion (28 million Euros) by last year.

This is a 227 times higher income in nine years.

There are also some lower-income companies in the Szentgyörgyi corporation group as well, such as the subsidiary of IMG, Green Office Solutions Ltd., which, according to its web shop distributes even toilet paper. This company shows up less frequently in framework agreements, but it also had received public contracts, for example in state healthcare. In a total sum of almost 60 million forints (163 thousand Euros), they have delivered stationery for the National Healthcare Service Centre and the National Institute of Pharmacy and Nutrition and provided cleaning services for the National Institute of Quality and Organizational Development in Healthcare and Medicines.

Two other companies from the group, Pegasus Informatikai Ltd, and MPS eXpert Ltd. usually show up as consortium partners of IMG in the IT framework agreements, although not very frequently. MPS eXpert participated in five of these between 2013 and 2018, while Pegasus got into three of them in 2017 and 2018.

The expanding empire of companies

Szentgyörgyi’s empire has expanded with some bigger enterprises in the last years: with VRS Magyarország Ltd in the autumn of 2018, and with Traco in 2019. Both companies had long been significant actors on the Hungarian IT market, and they were suppliers of state institutions even before getting into the interests of Szentgyörgyi.

When becoming part of the businessman’s company-empire, both companies had already been selected into several big state tenders, which are ongoing for years ahead. Traco is exceptionally successful in this area, as from 2017’s autumn on it showed up in 16 frame tenders. Besides this, similarly to IMG Solution, it also has state contracts independently from frame agreements. For instance, it delivered ticket machines for 3,7 billion forints (10 million Euros) to MÁV, and, after getting to the Szentgyörgyi empire, for another 339 million (923 thousand Euros), it completed service for a company called HungaroControl as a member of a consortium.

Traco has been operating since 1990, and according to its website, it provides a great variety of services from software development through system management to data consolidation. Quite differently, the webpage of IMG Solution – despite all of its success – offers little information about the company. Besides presenting some technical details, there is a press release about a European Union subsidy program, which states that on a tender called “Support of developments helping micro-, small- and middle enterprises in adjusting modern business and production challenges” IMG won 36,5 million forints (99 thousand Euros) of non-refundable EU financial aid, which aims that the company can “extend its stock with new, modern tools.”