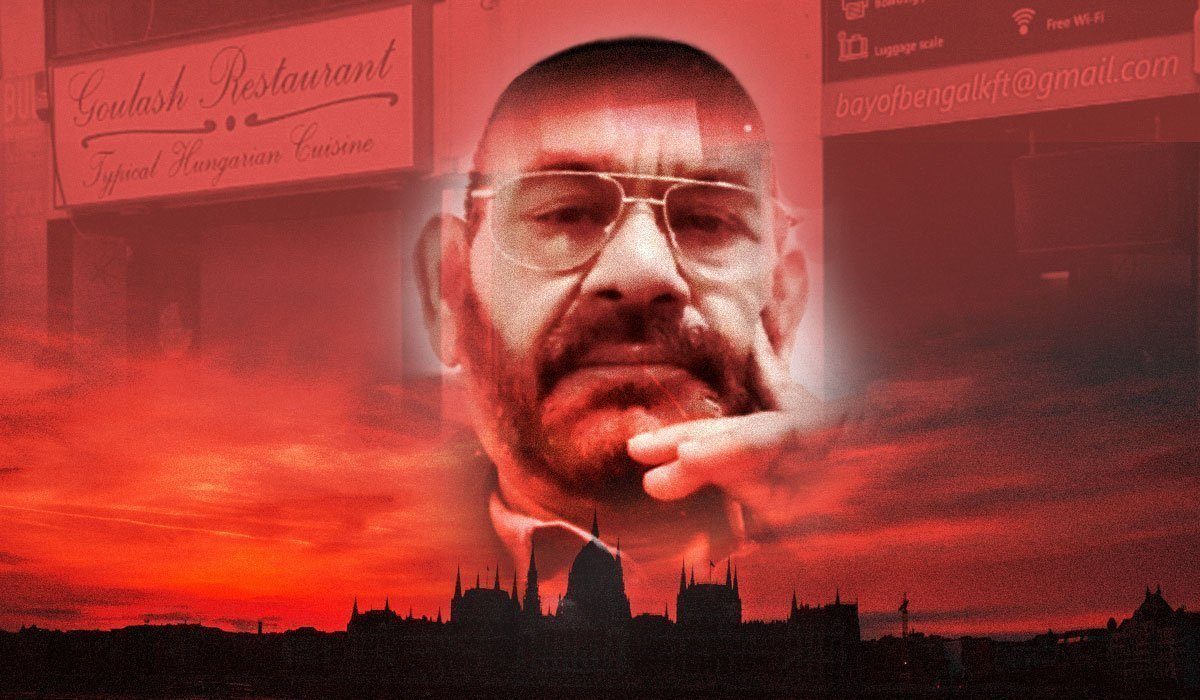 On a hot summer day in 1996, a brutal murder took place on a busy street in the capital of Bangladesh: a man was surrounded and shot by several people. He was shot nine times. Two weeks later, he died of his injuries at the hospital. It was not a simple homicide, but another episode of a bloody political war that had been raging for decades at the time. The people involved in the killing and their political allies have been shaping the politics of the Asian country ever since.

The man who had been shot gave a witness statement before his death. He said that he was shot by three brothers from the Ahmed family. The brothers were convicted eight years later. One of them, Josef, was sentenced to death, spent more than twenty years in prison, and eventually received presidential pardon.

His two brothers, Anis and Haris, were sentenced to life imprisonment. But they had already fled the country – and have been on the run ever since. Anis currently lives in Malaysia. Haris Ahmed – under false identity – moved to Budapest in 2015 and has been doing business here ever since. This was revealed by Al Jazeera’s Investigative Unit, whose investigation was assisted by Direkt36 in Hungary.

In recent years, Haris has bought real estate in downtown Budapest, operated a clothing store, restaurants and an unlicensed currency exchange, despite having been on Interpol’s Red Notice list for years. The Hungarian honorary consul of Bangladesh also helped him to receive residence permit in Hungary, although it is not clear whether he knew about Haris’ true identity.

Haris’ main source of income seems to come from his activities as a “middleman”: for the right price, he helps to secure deals, using his connections to the most influential people in Bangladesh. He used to be the bodyguard of Prime Minister Sheikh Hasina and held minor political positions. His brother is General Aziz Ahmed, the Chief of Staff Army Staff in Bangladesh, one of the most influential men in the country.

Al Jazeera’s Investigative Unit contacted all those involved in this investigation, including Bangladesh’s prime minister, home minister, and the Ahmed brothers. They did not provide a response to the inquiries.

The full documentary is available here:

In December 2014, a black-bearded Bangladeshi man in his fifties visited the sights of Budapest. Together with his guide, he took photos at Heroes’ Square, in the Buda Castle, and they also enjoyed a panoramic dinner next to the Danube. Although the man did not stand out from other foreigners in Budapest with his appearance, he was not an ordinary tourist: it was the head of the Bangladeshi army, Chief of Army Staff Aziz Ahmed, who visited Budapest.

General Aziz, a close ally of the current Prime Minister of Bangladesh, plays an important role not only in the leadership of the army but the entire country. In Budapest, however, he did not go on an official visit, but he had a family matter to take care of. He tried to help one of his brothers, Haris, to move to Hungary. Sami, a Bangladeshi-born businessman based in Budapest, did not only visit the main tourist attractions with General Aziz, but he was also asked to help Haris set up companies in the Hungarian capital. All this was told by Sami to Al Jazeera’s I-Unit, backed up by photos and emails, on the condition that his real name is not disclosed.

A few months later, Haris arrived in Budapest, but with a fake passport, under the pseudonym Mohammad Hasan, documents obtained by Al Jazeera’s I-Unit reveal.

False identity was needed because Haris was actually a dangerous criminal and a member of an extremely influential family. He is still on the list of Bangladesh’s most wanted criminals, and, for years, he had been on Interpol’s Red Notice list (at some point after March 2019, he was removed from Interpol’s list). 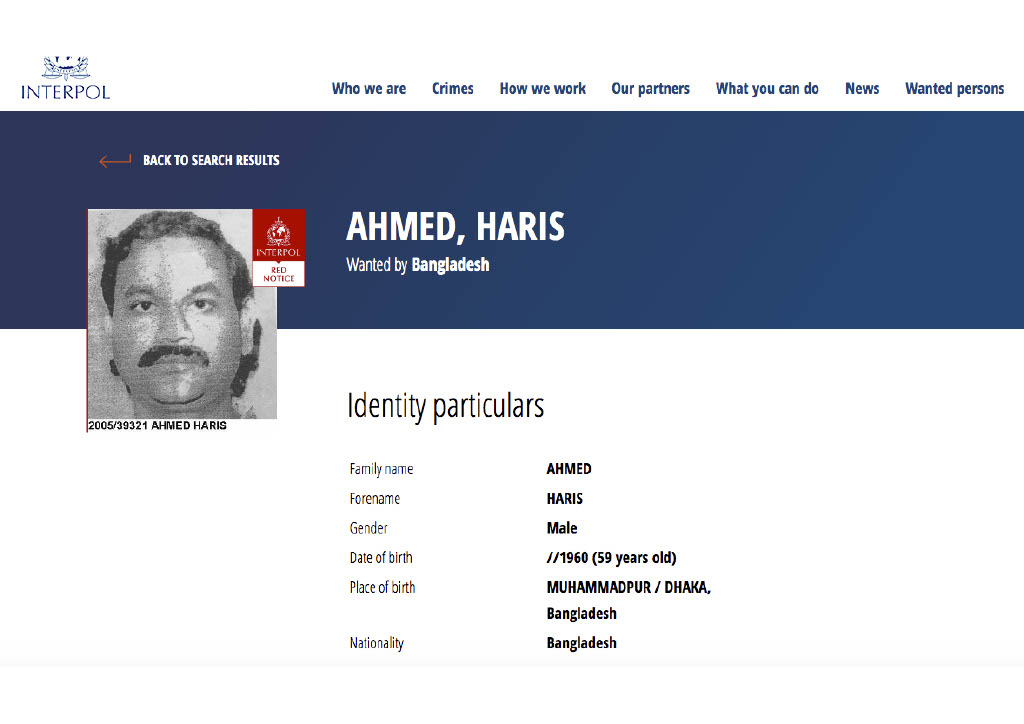 Bangladesh has the fourth largest Muslim population in the world, and it is one of the most densely populated countries. Since the turn of the millennium, it has also been one of the fastest growing economies in the world. The two superpowers in the region, China and India, also see the country as an important partner, situated at the strategically important Bay of Bengal.

Aziz, the general who visited Budapest, joined the Bangladeshi army in the 1980s. According to Al Jazeera’s research, his four brothers turned to crime: they started with petty street crimes, but later became a serious criminal gang, involved in extortions, kidnappings and murders. Haris also held minor political positions. Gangs like the Ahmed brothers also played an important role in Bangladesh’s political life, as they provided personal protection to members of rival political dynasties. Haris, for example, in the mid-1990s joined the personal protection team of Sheikh Hasina – the daughter of the assassinated founding president of Bangladesh – who has since been elected prime minister several times.

Haris had already working as Hasina’s bodyguard when one of Hasina’s political rivals, Mustafa Rahman, was killed in 1996 by Haris and his two brothers. It is still disputed how much Hasina, who was soon elected prime minister of the country, knew about the execution. What is certain, however, is that she also benefited from the killing, as the murdered Rahman was a member of a political party whose founders took part in the assassination of Hasina’s family decades earlier. Eight years after the murder, Haris was sentenced to life imprisonment – but he had already been on the run.

A new life in Budapest

Haris’ arrival to Hungary was not only supported by his brother, but also by the former honorary consul of Bangladesh, Ambrus Nyerges, according to documents obtained by Al Jazeera’s I-Unit.

In June 2015, Nyerges wrote a letter to the Immigration Office asking for a positive assessment of “Mohammad Hasan’s” application for residence. To his knowledge, the Bangladeshi businessman wanted to open a restaurant and a guest house in Budapest. “We are convinced that his successful business activities can serve as a reference for businessmen in Bangladesh interested in investing in Hungary,” Nyerges wrote. He did not answer our question about whether he was aware of the man’s true identity when he wrote the supporting letter.

Haris eventually received a residence permit under false identity and moved to Budapest in 2015. According to documents from the company register and land register, reviewed by Direkt36, Haris started several business activities:

• He bought an apartment in downtown Budapest
• He founded and bought companies (Bay of Bengal Kft. and Taylorville Kft.)
• He opened a clothing store called Niveau Fashion
• He operated Bengal Hostel, offering cheap accommodation
• He ran two restaurants (Vidróczki Restaurant at the Keleti Railway Station, and Goulash Restaurant at Kálvin Square)
• Right next to the Goulash Restaurant, he has also operated an unlicensed foreign exchange. The Hungarian National Bank confirmed that the currency exchange does not have the necessary permits.

According to Al Jazeera’s research, he also established a business portfolio in France. Recently, he was also looking for new investment opportunities in Hungary: he was considering buying a 66-room hotel in Budapest for 7.2 million euros (2.5 billion forints). He has a significant amount of money to invest, in spite of the fact that – according to company data – his businesses have not generated much profit so far (the clothing store, the hostel and the Vidróczki Restaurant all closed down within a few months).

According to an expert interviewed by Al Jazeera, these activities are highly indicative of structures put together for criminal intent. Businesses that generate large amounts of cash allows for “comingling”, which is “mingling dirty money with clean money, so that you can’t tell which is which,” explains Graham Barrow, who advises banks on how to prevent money-laundering.

However, Haris’s main source of income doesn’t come from his companies, but mostly from “ministry work and work on other governmental levels,” said Haris’ assistant, who runs his currency exchange and handles his book-keeping. When a reporter working for Al Jazeera pretended to be a potential investor, Haris asked for a twenty percent commission for acting as a middleman in the Bangladeshi business. According to him, no Bangladeshi-Hungarian business can take place without him.

“If anything goes down in Hungary, then I know about it. So far nothing has gone through without my nod (…) If they show me one order they have taken over my head then I’ll cut his ears off and feed them to the dogs,” Haris told Sami about his working methods, on a hidden camera footage. Haris said his role as a middleman was sanctioned by the prime minister Sheikh Hasina.

In a letter dated November 2015, one of Haris ‘companies, Bay of Bengal Ltd., for example, made an offer to supply bunk beds from Hungary to the Bangladeshi border guards, which was then headed by Haris’ brother, Aziz.

In February 2020, he wanted to convince Sami to help him to supply Hungarian-made bullets for the Bangladeshi army, as “Hungary makes the best bullets in the entire world,” Haris explained on a hidden camera footage, further persuading Sami: “We are on the dark side. (…) We’ll both be making money. It will come automatically. The money will just flow in.”

It is unclear whether the deal came through. The Honorary Consul of Bangladesh, however, had already been talking about such a business opportunity when Haris arrived in Hungary. “I am also proud that there are some special Hungarian items, which could be interesting for the Bangladeshi army (…)It may take time, but very shortly, we have good chance to get business with the Bangladeshi army,” Nyerges said in an interview, shortly after he wrote a supporting letter for Haris.

Since Haris moved to Budapest, Hungarian-Bangladeshi relations have also improved. In 2016, Sheikh Hasina paid an official visit to Budapest and had a “fruitful” discussion with Prime Minister Viktor Orbán. Foreign Minister Péter Szijjártó traveled to Bangladesh in September 2020, where he identified three main areas for possible cooperation with the country’s minister of trade (health, water technology and nuclear energy).

“The political relationship between Hungary and Bangladesh is balanced, which has recently shown a direction of dynamical development,” the Ministry of Foreign Affairs wrote in response to our question. We also asked the ministry if they were aware of Haris Ahmed’s claimed activities as a middleman, and the planned business deals concerning bunk beds and bullets. The ministry responded that it has no contractual relationship with either Haris Ahmed or his companies. The Ministry of Defence also wrote that it had never been in contact with Haris Ahmed, was unaware of the deals and had not participated in them.

After the publication of our article, Hungarian police wrote that as part of an international collaboration, the National Bureau of Investigation is “examining the circumstances of the case”.