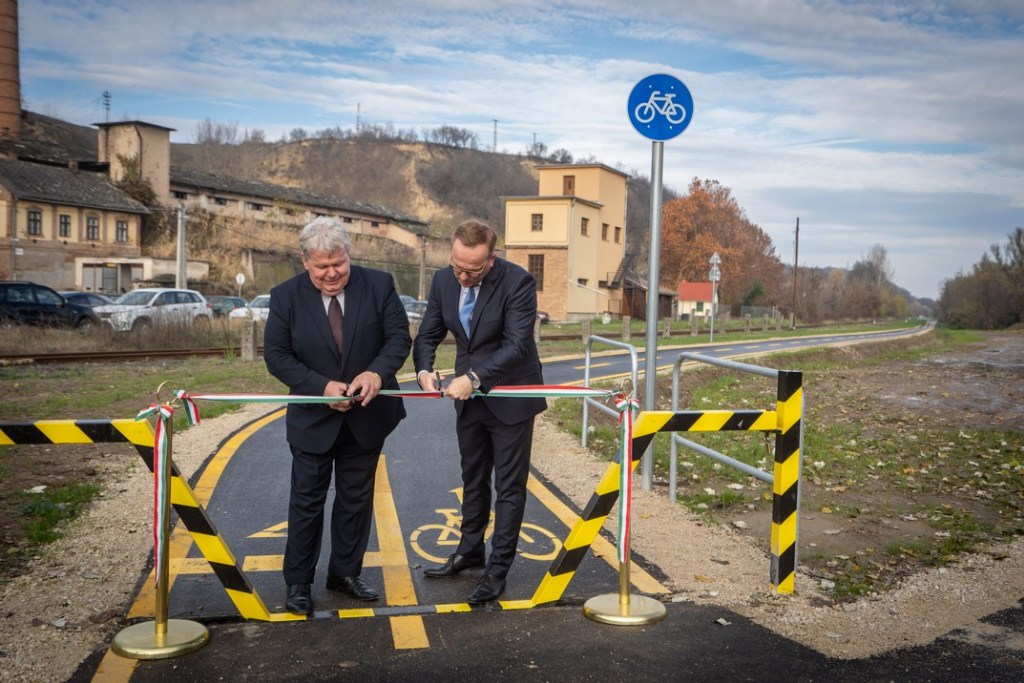 Last November, the leaders of Paks, the town that is home to Hungary’s only nuclear plant, proudly announced the completion of a bicycle lane that connects the town with Dunakömlőd, a neighboring settlement. Even János Süli, the minister in charge of Paks nuclear power plant expansion, and the member of parliament representing the region attended the event. It was not mentioned at the ceremony, but the 2.5 kilometer-long lane cost one million euros more than it was originally planned, with the final cost reaching 2.3 million euros.

The local government in Paks, led by Prime Minister Viktor Orbán’s party, put a businessman called Roland Sebestyén and his partner in charge of building the bicycle lane. Sebestyén does not keep a high profile nationally, however, he had business relations with the family of Anikó Lévai, the wife of Viktor Orbán. His company called Real-Rent and another company linked to him called Amalfi Hungária won significant construction tenders in Paks. According to our calculations, the two companies – mainly on their own, and in two cases as consortium partners – received contracts in the value of 6.2 million euros in the past two and a half years in Paks.

In addition to the high value of these contracts, the business successes of Sebestyén are remarkable also for other reasons. On all occasions, Real-Rent and Amalfi Hungária won the Paks works in public tenders where participating companies were selected and invited by the local government. In several tenders, the majority of the competitors could be in some ways linked to Sebestyén.

The businessman also started a big real estate project in Paks. One of his companies purchased local lands, which the municipality later wanted to buy from him for a much higher price. The transaction, after the protest of some local politicians, fell through.

Responding to Direkt36 questions, Sebestyén said that he has been working as a „classic road construction expert” for 20 years. He said it was natural for construction companies to win contracts in tenders and he always participated in these tenders in a legal way. It was just a coincidence that there are links between him and some of his competitors, he claimed. Other companies invited to the tenders did not reply to our inquiries. We also asked Sebestyén about his relations to members of the Orbán family but he did not consent to the publication of these answers.

The local government in Paks said that it followed the law in all tenders and there were no legal objections in any of the procedures.

A residential area and a member of the Orbán-family

Roland Sebestyén appeared around Paks in June 2016 when he sent a letter to János Süli, at that time mayor of the town. He mentioned in his letter that he would like to build a residential area in Paks, spending 5.9 – 8.8 million euros for real estate development.

According to the webpage of the residential area, Sebestyén put a company called Centrál-Ing Ltd. in charge of selling the apartments. One of the owners of Centrál-Ing’s daughter company is Imre Ökrös, who is part of the wider Orbán family. Ökrös is the husband of Gizella Lévai, the sister of Anikó Lévai, Orbán’s wife. In the past years, the Ökrös family has also been involved in other politically sensitive business dealings: Hungarian online news site 444.hu reported in 2016 that businessmen with links to the family accumulated heavy debts for a state institution.

The residential area is not yet ready, and there are currently only signs of construction preparations visible at the site.

Sebestyén also had direct connections with the Orbán-family. In June 2016, he set up a company together with Márk Ádám Szeghalmi, the son of Gizella Lévai. The seat of the company dealing with real estate development was in Budapest, but its name – Paks Ház Ltd. – suggested that they had plans to be active in Paks. The company registry court first rejected the company’s registration for the lack of permission to use the name from the local government. Two days later, the notary in Paks provided the requested approval. However, the company had a short existence, the owners initiated its dissolution six months later.

Sebestyén had a third real estate project in Paks: in September 2016, he and a few of his partners set up a company called Atompark Ltd., in which he still has one-third ownership. Two months after its establishment, Atompark started concluding pre-contract agreements for the purchase of Paks real estates.

According to a document seen by Direkt36 and signed by Sebestyén, one of these pre-contracts is about Atompark purchasing a piece of land for approximately 5.9 euros per square meter. Ownership papers show that the purchases were successful in 2017 and Atompark acquired an area of a size of more than 8.6 hectares (almost 12 football fields). Direkt36 has not seen the sales contracts but calculating with this price for a square meter, the total value of the whole area reaches approximately 510 thousand euros.

According to documents obtained by Direkt36, Sebestyén used the legal services of Beáta Blazsekné Bánovics, the wife of the notary, who edited and signed the pre-contract agreement.

Atompark purchased the area in 2017, while the local agreement declared it as an area suitable for construction, which increased the value of the whole property.

Later, it was precisely this section which the local government selected for the establishment of a “business zone” in the town. To implement the concept, it wanted to purchase Sebestyén’s real estate for the price of 54 euros per square meter according to the draft contract published at the beginning of 2019. The total price would have been 5 million euros, which would have generated a significant profit for Sebestyén.

Mayor Szabó Péter, the successor of Süli who is also a member of Orbán’s party, took the purchase of the real estate off the agenda without a vote at the last February session of the local government. Zoltán Horváth, who was an opposition member of the council at the time, told Direkt36 that local government members held a test vote at an informal discussion prior to the session. The council was split in the middle, meaning several Fidesz (the governing party) representatives also voted against the transaction.

Although unsuccessful with real estate deals, Sebestyén’s construction company Real-Rent Ltd. did well at local tenders. Sebestyén founded the company with his sister in 2002 and has had several million euros in annual turnover.

Real-Rent won its first Paks contract in the fall of 2018, and another four, typically road reconstruction works last year. With the exception of two cases when he applied together with consortium partners, his company was the sole winner of the contracts in the value of 4.3 million euros. In all cases, only invited firms could take part in the tenders.

„These procedures would not be unusual,” Gabriella Nagy, head of public finances program Transparency International Hungary told Direkt36. Tenders based on invitations mean less administrative burden on a smaller local government than an open procedure, she said, adding that, however, if the proper supervision is missing, then this simplified procedure could also be misused.

Direkt36 has found signs indicating that the companies invited to the tenders were linked to each other. In tenders where Sebestyén won, Amalfi Hungária Ltd., which had business relations with Sebestyén and its owner is the managing director of Sebestyén’s other company, was invited on two occasions. Amalfi Hungária itself won four road reconstruction works in Paks in recent years.

Typically, the same companies were invited over and over to the tenders won by Real-Rent and Amalfi Hungária. Out of these, four had loose, indirect links to Sebestyén or some of his businesses. One of them was Kétutas Ltd., the seat of which is located in the same village with 700 inhabitants in Veszprém county called Borzavár, where Sebestyén’s company Real-Rent is also registered. The two addresses are only 350 meters away from each other. A company called Mapex-Bau Ltd. was also invited several times, one of its owners is also leading a firm which was co-owned by Sebestyén’s business partner. Sebestyén told Direkt36 that these were just coincidences.

A closed tender based on invitation was also used in the case of the bicycle lane mentioned at the beginning of this article. Real-Rent and a company called Soltút won the contract together, and Amalfi, as well as Mapex-Bau, were also invited. These firms did not submit an offer in the end. Strabag applied too, and Real-Rent and Soltút won with a better price-value ratio, even if the price was clearly not the most important criterion. The local government originally set the value of the work at 1.3 million euros, but the contract was then signed for 2 million euros, and the local government’s modified budget from last year already included 2.3 million euros.

István Barnabás, a member of the Paks Deák Ferenc Association that represents the local opposition, raised the issue of expensive tenders at the session of the local council this January. He highlighted six tenders with increased expenses, two of these were won by Sebestyén, and one of them was the bicycle lane project. At the session, Barnabás recommended the revision of tender procedure rules, but mayor Péter Szabó rejected this by saying that the Paks rules „do not differ from the Hungarian practice, they comply with all laws.”

Even though the local opposition regularly brings up Sebestyén’s name and his political connections, the businessman keeps a low profile in Paks. He only appeared in local television and newspaper with the mayor in reports about the signing of the contracts his company has won.