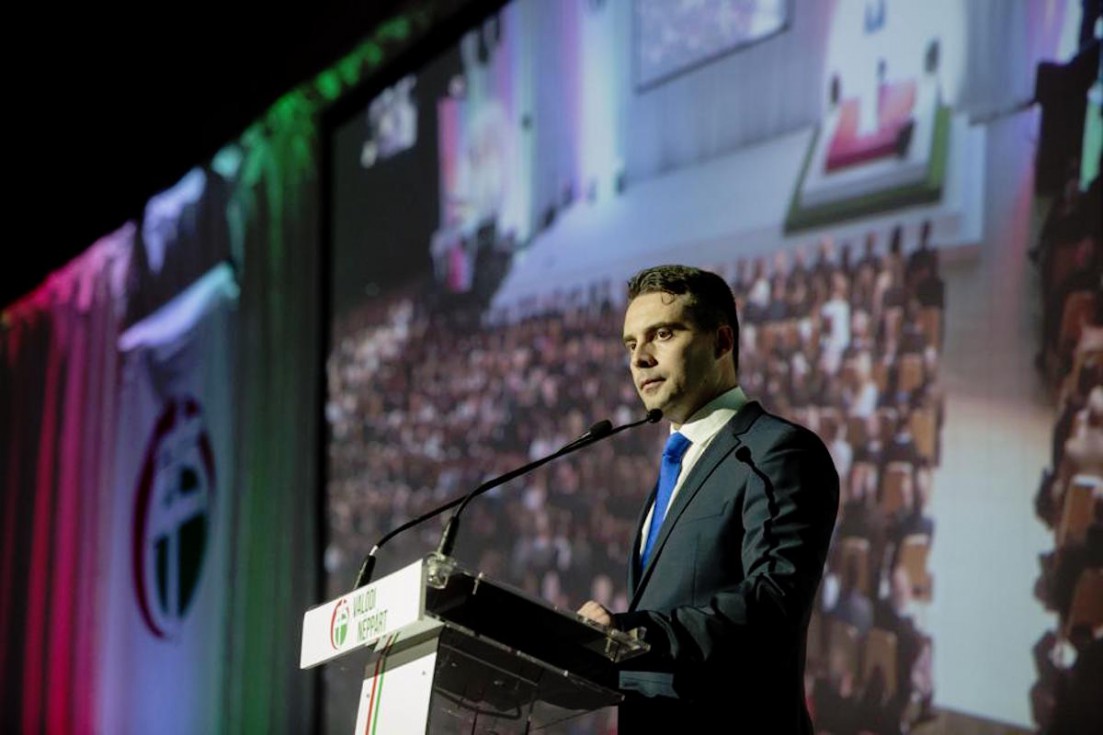 In a January speech opening the political season for Jobbik, chairman Gábor Vona announced that his party would launch a national consultation in 2016 focusing on corruption as well as health care and education. Besides citing some recent scandals, Vona called nepotism as a remarkable sign of corruption in Hungary.

However, this is something that Jobbik could be criticized for as well.

The only exception among the eight board members is Előd Novák, whose wife, Dóra Dúró, also happens to be a member of Jobbik’s parliamentary group. Novák said, however, that their relationship had no effect on each other’s political career.

Gábor Vona claims that the model for Jobbik is the kind of democracy where people can advance based not on political loyalty or corruption but on talent, hard work, and honesty.

It is true that Jobbik has not been rocked by any major corruption scandals yet. Still, the party is not free of controversies.

The European Anti-Fraud Office (OLAF) launched an investigation against Béla Kovács, representing Jobbik in the European Parliament, on the suspicion that he misused public money through the employment of interns. In December, Direkt36 showed how some of Jobbik’s funds ended up with companies owned by the friends and acquaintances of the party’s main background operator. These companies were often commissioned for work for which the owners and managers had no proper qualifications.

Jobbik claimed then that the selection was based on competence and they provided similar arguments in response to this story. The party told Direkt36 that they do not see any problem with hiring relatives of senior party officials because they were always chosen based on professional grounds.

Advisor, secretary and wife at the same time

Beatrix Volner, wife of vice-president János Volner, did not need much time to persuade Jobbik. Her company, Diamond Business Consulting, was contracted in January 2011 by the party just five days after its foundation.

The company received HUF 500,000 (€1600) monthly fee for verbal advising on “the changes of rules in company management and accounting, and their effect on enterprises.” In six months, Diamond Business received HUF 3m (€9600) in total from Jobbik, and it has not had any other revenues ever since (at least not until the end of 2014, the last year of which business reports are available). While Diamond Business advised Jobbik between January 2011 and June, the party contracted AABO System in December 2010 to advise on the same subject for an additional HUF 500.000 (€1600). This company had no direct link to János Volner and her wife at the time, but it had been owned by them until May 2010.

Neither Jobbik, nor the Volner couple wanted to explain why Jobbik chose Business Diamond and AABO, and how they worked for the party. The only comment Jobbik provided was that “the companies fully completed their tasks, and their mandate was needed due to their competence.”

While Diamond Consulting was advising Jobbik, Beatrix Volner was also working as János Volner’s personal secretary, as the tabloid Blikk revealed in April 2011. Jobbik confirmed that Beatrix Volner worked as his husband’s personal assistant for a monthly fee of HUF 85,000 (€270), but neither Jobbik nor the Volner couple disclosed for how long she held this position.

Volner explained to Blikk that her wife had assisted him for ten years in the business sphere, and she was the only one whom he could ask to work on weekends.

Beside Volner’s wife, the father of party director Gábor Szabó also received two thousand euros for consultancy work. Many people close to Jobbik reckon that Gábor Szabó is the most influential member of the party as he is in charge of local organizations and he knows Jobbik members the most.

His father, György Szabó, used to work as a car mechanic. He joined Jobbik at its 2003 foundation, and he has been a member of its ethics committee ever since. György Szabó also became a city councillor in Budapest in 2010. Between 2010 and 2012 he was a member of the supervisory board at the municipal Funeral Company. He was also a supervisory board member at the Centre for Budapest Transport between 2010 and 2014, and he has been a board member of the Budapest Transport Cooperation since January 2015.

Beside transportation issues, György Szabó focused on renovating a cemetery in Budapest. Szabó told Direkt36 that he spoke about this research with his son, Gábor Szabó, and that is why Jobbik’s parliamentary group ordered from him a study on the ‘current issues of cemeteries.’ György Szabó completed his 50 page long study for HUF 610,000 (€2000) in 2012.

A volunteer becoming a guru

István Apáti, István Szávay and Dániel Z. Kárpát were elected to be vice-presidents in June 2014 at the last congress of Jobbik. They also have relatives who developed business ties with Jobbik or its party foundation.

The parliamentary group of Jobbik contracted T+F 2002, a company then owned by Ferenc Apáti, István Apáti’s brother, to advise the party on agriculture. Ferenc Apáti holds a degree in agricultural economics and works as an associate professor at the University of Debrecen. According to his CV, he has been researching agriculture for more than a decade. According to the contract, T+F produced 3-4-page long studies for the party on average every month between April 2015 and December 2015. The company was paid HUF 118,500 (€380) for each study, and got HUF 1.01 million (€3500) in total.

István Apáti told Direkt36 that he recommended his brother to Jobbik because of his competence as “all parties need consultants with knowledge, like his brother’s.” The 9-month long contract was not extended, because, according to István Apáti, his brother is extremely busy.

Ferenc Apáti said that his work was required for supporting party motions on the rural development program of the government, which was being drafted at the time. Ferenc Apáti also claimed that “sadly there is no one else one in Hungary researching the economy of the vegetable and fruit sector” and Jobbik could not have contracted anyone else in this subject who has such research results.

A company owned by Dániel Z. Kárpát’s mother and the then 79-years old grandmother received HUF 1m (€3300) from Jobbik’s party foundation, as TV channel RTL Klub reported. The firm Kárpátia Műhely received the money for publishing a book. Although Dániel Z. Kárpát has not held any position at Kárpátia Műhely since 2012, the reporter of RTL Klub was told at the headquarters that Z. Kárpát is the right person to ask about the company.

István Szávay and his brother, László, got involved in the activities of Jobbik early, at the time of its foundation. László Szávay studied philosophy, theology and history and originally he pursued an academic career. Since May 2012, the parliamentary group of Jobbik has contracted him 13 times through two years for verbal consultancy. In total, László Szávay received HUF 2 million (€6500). He told Direkt36 that the director of the parliamentary group, Gergely Farkas, asked him to give communication advice and to do creative work for the party.

László Szávay claimed that everyone was very satisfied with his work and that is how he established close ties with Jobbik’s leadership . Direkt36 has learned from sources familiar with Jobbik that László Szávay is part of Gábor Vona’s advisory team, however Szávay refused to comment this. The advisory team’s informal name is Tröszt and consists of five members. Gábor Vona previously said in an interview in ATV that the members of this group are “young geniuses” and that he speaks with them before all of his major speeches.

László Szávay started to work full time in politics in June 2015 when he became the leader of Jobbik MP Dóra Dúró’s team who heads the parliament’s committee on culture.

Vona’s wife and the party’s media

Gábor Vona’s wife has played an essential role in developing Jobbik-leaning media. Barikad.hu, a news portal close to Jobbik, was established in 2007 and Vona and his wife, Krisztina Vona-Szabó, worked the most on the website in the early days.

According to a person close to Vona at the time, Vona wrote posts using an alias. The print version of Barikád was launched in 2009, and one of the party’s politicians, Sándor Pörzse, has become officially its editor-in-chief in 2010, but multiple sources confirmed that in effect Krisztina Vona-Szabó acted as the top editor. She edited and ordered the articles, made decisions on assignments and consulted the party leadership on them. During this period, Gábor Vona was an owner of Magyar Hírek Ltd., publisher of Barikád, together with Csanád Szegedi. According to a source, Vona repeatedly exerted influence over Barikád’s content, for example he wanted to see the whole paper before publication. In 2011, Krisztina Vona-Szabó obtained Gábor Vona’s business share.

The editorial room of Barikád used to operate at Jobbik’s parliamentary offices and Krisztina Vona-Szabó regularly went there to work. In March 2011, her name appeared in the imprint of Barikád as the member of the editorial board, and occasionally she published columns. After the fallout between Csanád Szegedi and Jobbik in autumn 2012, Magyar Hírek was bought by Iránytű Intézet, a Jobbik-leaning think tank. Its owner, Richárd Forrai, told Direkt36 that Iránytű bought Szabó-Vona’s share as well because he wanted to have full ownership in order to transform the company.

Krisztina Vona-Szabó did not only sell her ownership but she also left the company and “retired from public life”, according to sources close to Jobbik. In 2014, however, she returned as an editor of Barikád.

Magyar Hírek received almost HUF 97m (€307,000) in total from Jobbik’s party foundation since 2011. This amount was around 20 percent of its revenues between 2010 and 2014. We put several questions to Gábor Vona and Krisztina Vona-Szabó regarding their role at Barikád, but neither of them replied.

Krisztina Vona-Szabó’s sister, Judit Szabó, also has held various positions close to his brother-in-law, Gábor Vona. Between 2010 and 2012 she worked as a secretary of Barikád and then she became Gábor Vona’s secretary. Since the summer of 2013, she has been Richárd Forrai’s assistant at Iránytű Intézet. In November 2015 she became a manager at Magyar Hírek together with Forrai. At the same time, she also became a manager at LKG Stars, a company owned by Forrai that organizes exclusive events for Jobbik.

The Szabó sisters also work as editors at Igenélet, a newly launched lifestyle magazine. Some of its staff members have links to Jobbik, however, the party told Direkt36 that they do not have any formal ties with the magazine.

There are some other members of Jobbik’s leadership board whose relatives worked as personal secretaries. The ex-wife of Tamás Sneider, Jobbik’s other vice-president , was also his personal secretary between 2010 and 2014. Gábor Szabó’s sister , Andrea Szabó, was MEP Csanád Szegedi’s assistant in Brussels for five months, as Hvg.hu reported.

Even though current MEP Zoltán Balczó ceased to be a vice-president of Jobbik in 2014, his relatives still hold positions at Jobbik-leaning media organizations. His son, Mátyás Balczó, has been a journalist and editor at Barikád since 2010. His wife, Csilla Balczó-Sándor, also works there as journalist. Between 2011 and 2013 she received HUF 4.5m (€15,000) from Jobbik for her verbal advice, studies and articles for the party’s newspaper. She was also a member of supervisory board at a public company (Vízkutató Területhasznosító) for a year from August 2011.

Jobbik stated that they exclusively contracted Jobbik leaders’ relatives based on their “professional performance.” They added that “family ties don’t play any role in Jobbik’s HR policy, we order services from people and companies based on their merits.”

Rise of Jobbik
More in this project 
Direkt36.hu uses cookies, by clicking ‘Got it’ you accept this procedure.
If you need more information on cookies we use, how you can delete or block them, please, see our Privacy Policy.
Got it
