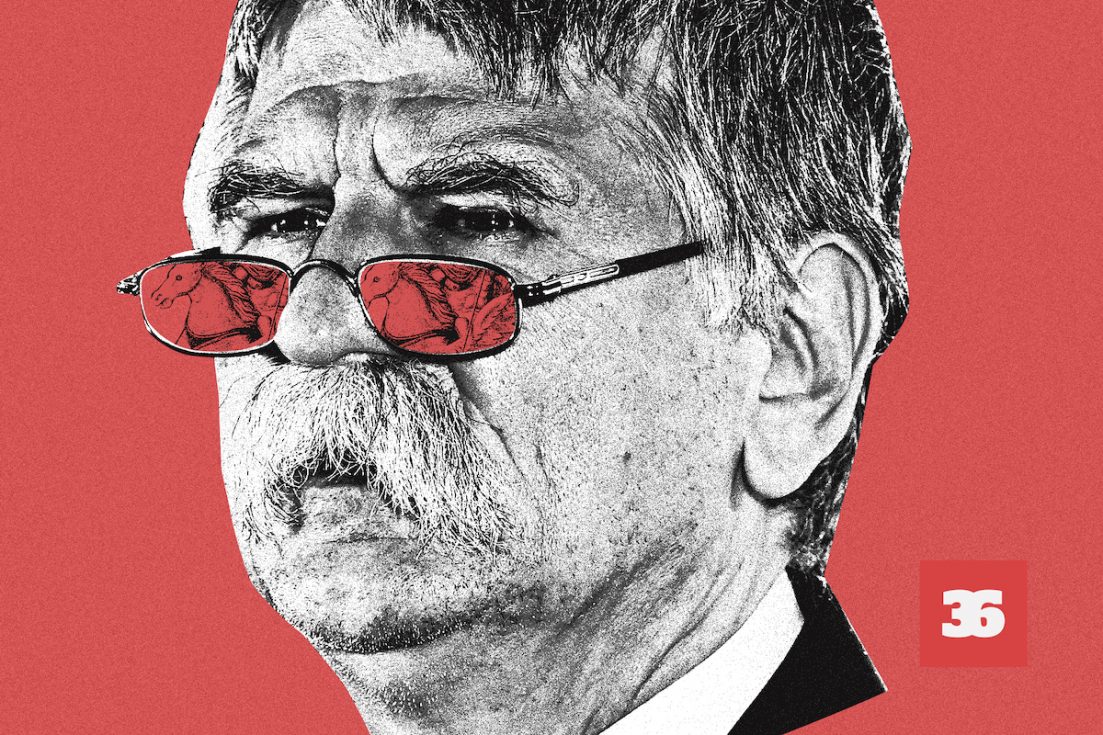 Speaker of the Hungarian Parliament László Kövér, one of the most influential politicians in the governing Fidesz party , addressed a special audience at the end of February last year.

He spoke to current and former leaders of Hungarian civilian national security agencies at an event celebrating the 30th anniversary of the services. The ceremony took place at the newly built headquarters of the Constitution Protection Office, the counterintelligence agency.

Direkt36 has obtained a recording of Kövér’s speech, which reveals that he used the occasion to convey a political message to the national security leadership. Although he did not name political parties or politicians, he made it clear that he considered Fidesz’s political opponents to be the greatest threat to national security for Hungary.

He said: “I consider this political situation to be the most dangerous threat to national security that threatens Hungary today.”

Help us tell the truth in Hungary! Join our membership program now.

Kövér likened the opposition to the movement of Communist leader Béla Kun (who ruled Hungary briefly in 1919) and said that the opposition parties view Hungary’s EU and NATO membership as an opportunity to win the “class war” that was started by their predecessors more than hundred years ago.

Excerpts from the recording (in Hungarian):

Kövér is known as one of the harshest critics of the opposition. In an April 2020 interview with far-right weekly Demokrata, he said that “the Hungarian leftwing liberal opposition is part of a globalist, anti-national network” and that its representatives are “no different from Mátyás Rákosi or Ernő Gerő”, the top leaders of Hungary’s Stalinist dictatorship in the 1950s.

What makes Kövér’s leaked speech special, however, is that he spoke directly to the leaders of the national security services at an event closed to the public. In his speech, he also stated that he has the greatest trust in “the current and future leaders and staff of the services” that they will protect the country from the threats it faces.

Kövér’s speech is also remarkable because the law regulating the national security services explicitly states that one of the most important tasks of the services is to protect “representative democracy based on a multi-party system.”

The event was not public, there were no reports about it even in the pro-government press, and when Direkt36 checked László Kövér’s website weeks ago, there was no mention of the speech there either. On Thursday, November 25, we contacted Kövér’s office and shared a full transcript of the recording with them. On the same day Zsolt Bayer, a pro-government columnist, unexpectedly published a transcript of the speech on his blog.

The text of the speech also appeared on Kövér’s website. It is clear that the text has been uploaded just recently. The numeric ID in the page’s URL code is similar to those of the most recent posts and very different from the posts that were originally published in 2020 February when the speech was given. Also, the recent upload shows that the page wasn’t indexed by Google at the time of writing this piece, meaning that Google’s web-crawling programs haven’t visited the page yet. Thus, the text of the speech is not included in the search results, while the search engine still finds posts on Kövér’s site even from this October.

Direkt36 still has not received a response from Kövér’s office.

Kövér did not say in the 2020 February speech what specific actions he expected from the services. Since then, however, it has become clear that in recent years, Hungarian opposition politicians and people close to them have been targeted with the Israeli spyware called Pegasus. A year before Kövér’s speech, György Gémesi, an opposition mayor and chairman of a small opposition party, was targeted with the cyberweapon. Zoltán Páva, the publisher of an opposition news site and a social media consultant working for opposition parties, was being surveilled with Pegasus early 2021. His surveillance started on the day when it was made public that his company began to work for Democratic Coalition, the largest opposition party.

Fidesz MP Lajos Kósa recently acknowledged that the Hungarian government had purchased the spy software, and Gergely Gulyás, the head of the Prime Minister’s office, said there was “some basis of reality” in reports about the cases of Pegasus surveillance.

1st of March is the day of civilian national security services in Hungary, and anniversary events are usually held close to that date. For last year’s event, when the services celebrated the 30th anniversary of their establishment after the fall of communism, the venue was the then newly built modern headquarters of the Constitution Protection Office.

Representatives of other services, including the foreign intelligence agency Information Office and the Special Service for National Security, which conducts covert surveillance on behalf of the other agencies, were also present.

Some former leaders who served under previous governments attended as well. However, the list of invitees was not complete. For example, Sándor Laborc, who led the counterintelligence agency under the government of Ferenc Gyurcsány, currently a leader of the opposition, was not invited to the event. (As Direkt36 recently reported, Laborc was also targeted by Pegasus spyware in 2019) https://www.direkt36.hu/en/a-gyurcsany-kormany-ket-nemzetbiztonsagi-vezetojet-is-celba-vettek-a-pegasusszal/

The event’s speaker, László Kövér, also has personal ties to the services. As he said at the beginning of his speech, he was a member of the National Security Committee of the Parliament for nearly twenty years, and from 1998 to 2000 he served as minister overseeing the civilian national security services. Referring to this, Kövér addressed the members of the audience as his “colleagues” throughout the speech.

To explain why he thinks that the opposition is the biggest national security threat to Hungary, he brought up the turbulent period after the First World War when the country was briefly taken over by a pro-Soviet group led by Béla Kun. Then, in his opinion, the most serious problem was that “there was no fundamental consensus in the interpretation of the state and nation within the contemporary Hungarian political elite.”

In the second half of the speech, Kövér returned to the challenges of today. “At present, in the European political and economic sphere, supranational organizations and interest groups are emerging more and more openly, whose financial strength and thus their ability to influence far exceed the strength of most nation states,” he said. He pointed out that Google’s annual sales are roughly the same as Hungary’s “gross national product.”

He added that there was a “novel struggle” in the world, especially in the fields of “knowledge industry, education, culture and media.” He said that in Europe the goal now is not to occupy land but to “occupy the minds.”

Kövér then turned back to criticizing the opposition.

“The last big common goal of the Hungarian political elite formed after 1990 was Euro-Atlantic integration. Since its realization, the different perceptions of the state and nation within the political class and all the consequences of this have become more and more acute,” said Kövér. He added, referring to the opposition, that for them the Euro-Atlantic alliance is a possibility of ending the class struggle that started more than a century ago with the “help of internationalists.”

He stressed that although “laws and institutions are extremely important, human nature, values and loyalty always prove to be paramount in crisis situations.” He added that loyalty does not mean that there should be an ideological identity with “one camp or another” of politicians, but that “the professionalism and legitimacy of conducting operational work means loyalty to their supervisors, and to their state and nation.”

He concluded by saying that “the Hungarian people who want to retain a sovereign state and a nation have confidence in the services.” “We hope that all of your knowledge and strength will be put to use so that the Hungarian state and nation will never fall to the dust again,” Kövér said, then thanked those present for their work.

We asked the Constitutional Protection Office if Kövér’s speech has had any influence over their work. The Ministry of Interior, which oversees CPO, responded with this brief statement:

“The national security services, including the Constitution Protection Office, perform their duties in accordance with the constitution of Hungary and the relevant laws in the field. The management order of their activities is clear, clear and unambiguous. Employees of the services do not have to interpret or comment on any ceremonial speech, public expression, they have to perform their activities faithfully to their oath.”

The cover picture was made by szarvas / Telex