A truck with a yellow logo on its side left the stone mine owned by Győző Orbán, the father of prime minister Viktor Orbán, on 26 July at 11:20 AM. In the next hour, another six vehicles with the same sticker drove out of the site near a village called Gánt, leaving clouds of dust behind them.

The yellow logo showed a mole carrying a spade in one hand and dragging a bulldozer with the other. The sticker also bore a company name: Vakond Via (vakond means mole in Hungarian). This company is part of the Duna Group, a construction giant that has been winning lucrative state contracts in recent years, often in consortium with the companies of Lőrinc Mészáros, a businessman close to prime minister Viktor Orbán.

Mészáros, a former gas fitter and ex-mayor of Orbán’s hometown became one of Hungary’s richest people in just a few years, also has joint companies with László Szíjj, the majority owner of Duna Group.

Vakond Via has not responded to questions on the content and the destination of its trucks. According to the firm’s financial reports, its activities are tied to the construction projects of Duna Aszfalt, the flagship company of Duna Group. According to the group’s website, the vast majority of these projects are financed by the taxpayers, like road constructions or sewage developments. As a previous Direkt36 investigation showed, the companies owned and controlled by Viktor Orbán’s father and two brothers often participated in similar projects as suppliers or subcontractors.

The trucks of Vakond Via appear to visit the mine regularly. Its vehicles were seen there a week before the 26 July visit as well.

There were trucks from other companies as well, often lacking any logos or names. During the visits of a reporter of Direkt36, the flow of trucks was steady. A new vehicle arrived almost every few minutes.

We sent several questions to Dolomit Ltd., the mining company of Orbán’s father, but, just as it had happened on previous occasions, they did not respond to them.

This was not the first episode that showed that the circles of Lőrinc Mészáros have business ties to the Orbán family.

As we reported in a story last year, Duna Aszfalt had bought concrete items from Dolomit for a sewage construction in Budapest. The Duna Group may be working on a similar project now as last week one of Vakond Via’s trucks left the mining site loaded with concrete elements normally used for sewage construction.

The rise Mészáros’ companies and the Duna Group happened in 2013-2014, around the same time when Lajos Simicska, a former ally of Viktor Orbán, was marginalized. After that, the companies of Mészáros and Szíjj kept on winning public construction projects, in many cases as consortium partners. They worked together, for example, on a water quality improvement project on the Great Plain of Hungary, and last year they won a tender for the construction of a new section of M8 highroad, worth 69 billion forints (214,6 million euros). 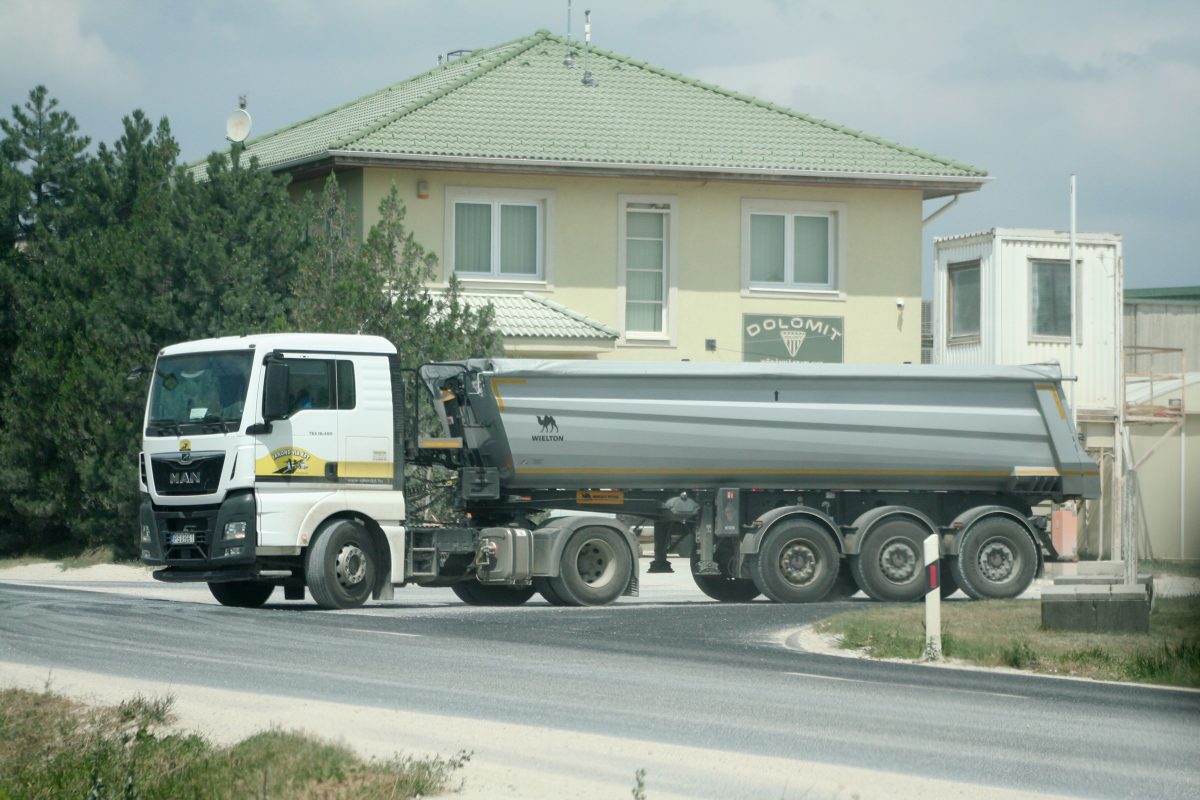 One of Vakond Via’s trucks

Mészáros and Szíjj also have common businesses – such as CLH Hűtés- és Klímatechnikai Ltd. – and they had also been co-owners of a real estate development company.

They have both accumulated huge wealth thanks to state-financed projects. According to the latest list of Forbes Hungary, Mészáros is the country’s 8th richest person, while Szíjj is the 9th. The total wealth of each of the businessmen reaches around 105 billion forints (326,6 million euros), Forbes calculated.

No worries about the future

Not even close to this level, but the companies owned by father and two brothers of Orbán also produced spectacular growth in recent years. Their three most important companies – Dolomit Ltd., Gánt Kő Ltd, and freight company Nehéz Kő Ltd. – produced a total income of close to 5 billion forints (15,5 million euros), which is almost twice as high as their turnover 5-6 years previously.  In the meantime, the family’s private wealth also grew: in the past 3 years, the companies paid over 6 billion forints (18,6 million euros) in dividends, although a smaller part of this was paid to minority owners who are not related by blood to the Orbán family.

It seems that Győző Orbán, the PM’s father who plays a leading role in managing the family’s companies, does not worry about the future of the companies. At a company assembly held this April, Dolomit Ltd. decided to pay 2,5 billion forints (7,8 million euros) in dividends, mostly from company savings accumulated in previous years. According to the minutes of the meeting, Győző Orbán tried to reassure his business partners that the dividend payment would not endanger the solvency of the company.