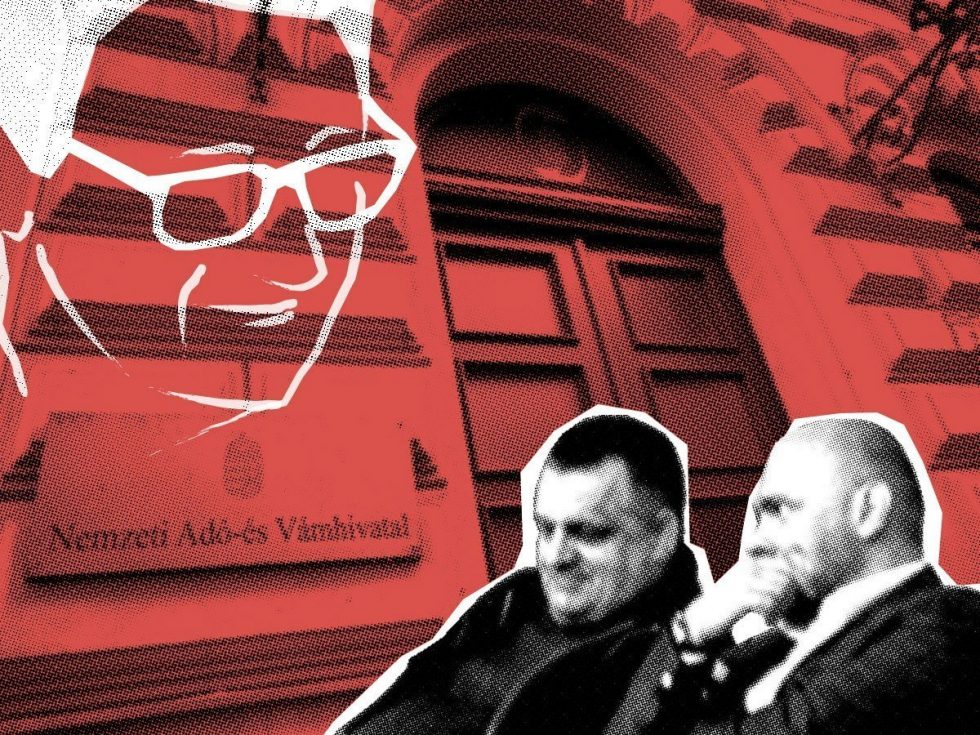 The career of Tamás Balogh, a 39-year-old, has seen a big leap in the last few years. In his twenties, the black-haired man was a member of the wrestling team of Marcali, a rural town in West Hungary, and after earning his law degree he worked as an employee at the local municipality.

Later, he was hired by a public health agency in the capital Budapest, but then a few years ago he got a senior position at one of the country’s most important government agencies. He became the head of the department in charge of major procurements at the National Tax and Customs Authority (NAV).

What makes Balogh remarkable, however, is not only his spectacular rise but also his network of personal relationships. He has ties to the same circle of former wrestlers whose political connections and state-linked business activities Direkt36 had exposed in a previous investigation.

Last year, we reported that IMG Solution, a company without a functioning website, has received a series of major public contracts. The company’s majority owner is Gábor Szentgyörgyi who is a long-time acquaintance of Győző Orbán Jr., one of the two brothers of Hungarian prime minister Viktor Orbán. Szentgyörgyi and Orbán worked together in a sports association and took at least one foreign trip together. As another sign of their close relationship, last year they watched a football match together with Viktor Orbán in the VIP booth of the stadium of the prime minister’s favorite team.

Balogh, now in a senior position at NAV, is directly linked to both Szentgyörgyi and Orbán’s brother.

Balogh and Szentgyörgyi went to the same school in Marcali around the same time and wrestled in the same local sports club. Based on their social media posts, also their families have been in contact with each other in recent years.

Balogh and Orbán Győző also know each other. They are friends on Facebook and appear in photos together. Győző Orbán also seems to have a close relationship with Balogh’s father, Vilmos Balogh, who is also a fellow wrestler and sports manager.

Szentgyörgyi’s companies – IMG Solution and other firms – have received multiple contracts from agencies where Balogh has worked over the years. As Direkt36 reported previously, in one case, a consortium of companies that included IMG Solution won a major public tender of NAV despite submitting the most expensive bid. Sources close to the procedure told us at the time that the tender was designed in a way so that only IMG’s consortium was able to meet the conditions.

The protagonists of the article have not responded to our e-mails sent on Monday, in which we asked them whether Tamás Balogh had played any role in awarding the NAV contracts to IMG.

High-Priority Procurements for a Friend

After graduating from a Marcali high school in 1997, Tamás Balogh, a curious and book-loving student, according to one of his former teachers, went on to study at a law school.

With a degree in his hand, he worked at various municipal and state agencies. Although Balogh did not respond to our questions about his positions, his career path could be reconstructed with the help of public records and through interviews with people who know him.

Balogh’s name first appeared on the documents of the municipality of Marcali as an administrator and as a public procurement officer in 2011. The last time his name appeared in the municipality’s publicly available records was in 2015.

Around that time, he appeared to have got a job at a national health care agency. Between the summer of 2014 and December 2015, Balogh was mentioned as a public procurement expert and contact person on the procurement documents of the Institute for Pharmaceutical and Health Quality and Organization Development (GYEMSZI) which was later renamed to National Healthcare Services Center.

Balogh is currently the head of the Department of High-Priority Procurements at the tax authority NAV. The department was set up in October 2016 to conduct bigger public procurement procedures, including that of buying IT products. The first time Balogh was named as a contact person on a procurement document was in June 2017.

By that time, the companies of Balogh’s hometown acquaintance, Gábor Szentgyörgyi, had already been successful in several major public procurements, and received contracts from both GYEMSZI and NAV. Thanks to these contracts, IMG, which still does not have a functioning website, has produced spectacular growth in just a few years.

In general, it is decided in several rounds which companies can provide IT and office technology products to government agencies and other state institutions. First, the Procurement and Supply Directorate selects companies, often dozens of them, through a procurement. The directorate signs a framework contract with the selected companies. Then the individual state agencies can order products, like laptops or photocopy machines, exclusively from these companies. For example, if the National Tax Authority wants to buy new computers, it has to solicit offers from the companies in the framework contract and will choose one of them.

Based on such framework contracts, NAV already ordered products from IMG. In May 2017 – not long before Balogh’s name first appeared on the documents of NAV – the tax authority bought 3000 computers and 600 laptops from a consortium led by IMG for 1.27 billion forints (4 million euros).

The result of another tender, also based on a major framework contract, was announced at the beginning of last year, when Balogh was already the head of the High Priority Procurements Department. The tax authority announced a tender to buy 2500 printers, which was won by a consortium of companies including IMG, despite having submitted the highest bid, close to 1 billion forints (3.2 million euros). Market sources told Direkt36 at the time that the conditions were tailored to Xerox type of printers, and only the eventual winner had the contractual background to offer these models.

As NAV did not answer our questions, it is not clear whether the contract was concluded with the consortium of IMG.

IMG also received smaller contracts from NAV outside the frameworks, records show. In 2018, the tax authority bought 65 printers for 5 million forints (15.8 thousand euros) from Szentgyörgyi’s company and also ordered other printing materials for 22.2 million forints (70.2 thousand euros). An e-mail detailing the latter order was not only sent to employees of IMG, but also an addressee named Tamás Balogh.

Another company of Szentgyörgyi, named Green Office Solution Kft. also won contracts from several state institutions, including the National Healthcare Services Center at the beginning of 2016, and later also from NAV. Last year, the tax authority concluded 5 contracts with the company, worth a total of 384 million forints (1.2 million euros).

Their wives’ earlier comments on social media also suggest that the two families know each other. Although the Facebook friend lists of Balogh and Szentgyörgyi are not public, they surely have at least one common friend on the social network: Győző Orbán Jr, who had also been a wrestler in his teenage years and returned to the sport in his 30s.

Viktor Orbán on the left, next to him his father, Győző Orbán.
Gábor Szentgyörgyi and Győző Orbán Jr. on the right.

What clearly connects the three men is the NIKÉ Sports Association. Győző Orbán Jr. is the honorary president of the organization, which was founded in 2009 in Marcali and also has a wrestling section.

In 2011, the representatives of NIKÉ visited Kárpátalja, a part of Ukraine with a large number of ethnic Hungarians, to build partnerships. The delegation included Gábor Szentgyörgyi, Vilmos Balogh, and Győző Orbán Jr.

As 444.hu reported, the association received TAO-support – deriving from a special corporate income tax relief system designed to help sports associations – from companies linked to the family of PM Viktor Orbán (such as Elios, a company previously co-owned by Orbán’s son-in-law, from the mining company of Orbán’s father and also from Szentgyörgyi’s IMG).

A short video about the Senior World Championship of free-style wrestling.
Győző Orbán appears around 1:30.

In 2016, NIKÉ merged into a Budapest-based sports association called Budapesti Honvéd SE. Vilmos Balogh and Győző Orbán Jr. continue to have leading roles in the association’s wrestling section, attending various events and competitions together. Most recently, they travelled to Skopje, Montenegro, for the Senior World Championship of free-style wrestling.

Győző Orbán Jr. giving a speech at Honvéd’s dinner.
Tamás Balogh (wearing a black suit and glasses) is listening to him.

Although Tamás Balogh does not feature in Honvéd’s public documents as a member or leader of the association, last December he was also invited to a dinner of Honvéd’s wrestlers in Budapest. Photos uploaded to Facebook by the association show that Győző Orbán Jr. was sitting at the head of the table and he also gave a speech during the evening.