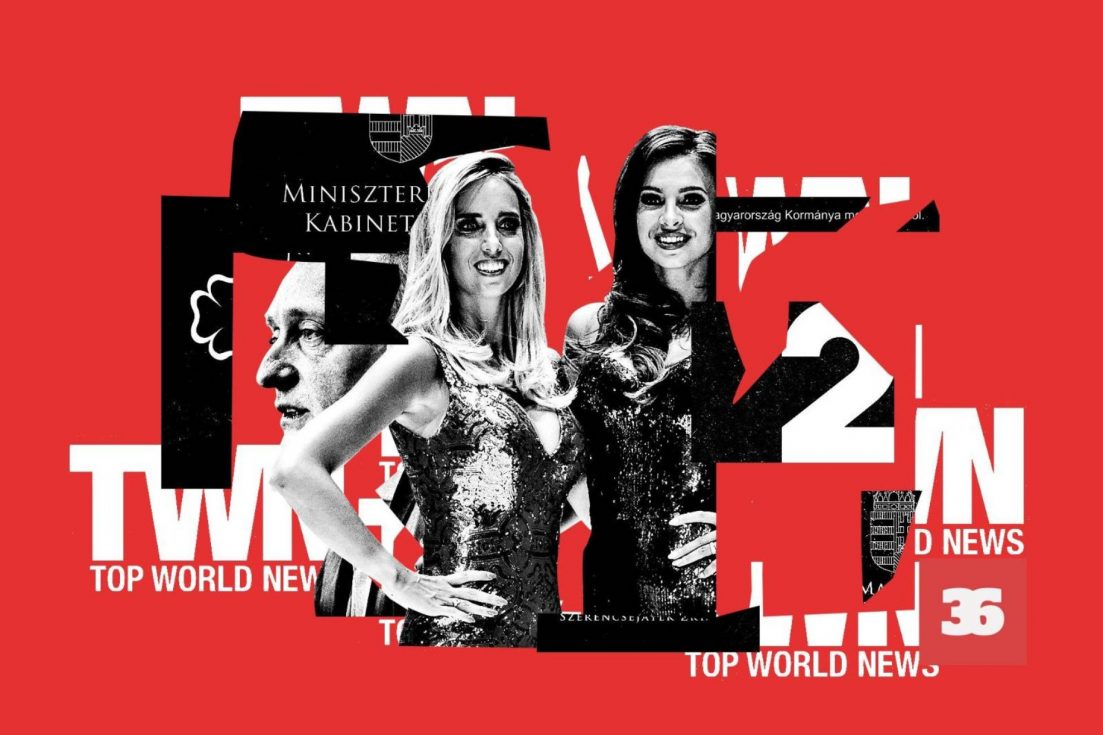 At the end of 2019, the office Antal Rogán, the powerful minister running the cabinet of Prime Minister Viktor Orbán, announced that the he was divorcing from his then-wife Cecília after 12 years of marriage. She remarried in 2020 but continues to use the name of her political ex-husband and she is currently called Cecília Rogán-Gaál.

According to Direkt36’s research, the former wife has not moved far from the gigantic public spending that Rogán controls as one of the most influential members of the government. In fact, one of the government’s latest advertisements has been running on the tabloid website she owns with her business partner, as well as an advertisement for a state-owned company supervised by Rogán. The site also regularly features an advertisement for a show on the pro-government television channel TV2. The show’s partner is the Hungarian Tourism Agency, which is also operating under Rogán’s office.

Top News Hungary Kft, the publisher of Top World News, Rogán-Gaál’s website focusing on tabloid news, recently made the news for its astonishing financial results for the year 2021. The low-traffic website had a net turnover of 1.5 billion HUF (3.77 million EUR) last year, of which it made a profit of more than  1.3 billion HUF (3.27 million EUR). Rogán-Gaál and Sarka took the profits out of the company as dividends..

“This is absurd, it cannot be a real economic performance. It is impossible to achieve such a result in the current Hungarian market and beyond” – Ágnes Urbán, economist, university lecturer and researcher at the Mérték Médiaelemző Műhely told Direkt36. According to her, the results of Rogán-Gaál’s company are also outstanding because market-based news sites can only be successful if they work with a large number of journalists, which is why their costs are high.

“It is typical that nowadays it is more a question of whether media companies can survive, the 85 percent profit margin is absurd,” Urbán said.

Rogán-Gaál’s company has achieved spectacularly good business results despite the fact that Top World News (twn.hu), according to Gemius data, does not usually rank among the top 150 most read Hungarian websites in the daily traffic competition. Its social media reach is also particularly poor. On Facebook, they have 23,000 followers, but sometimes there is a month between two posts and the number of reactions rarely exceeds ten. (Meanwhile, posts by Telex or 444, for example, often receive hundreds or even thousands of likes.)

Twn.hu mostly publishes news about Hungarian and foreign celebrities, as well reports on crime and other tragic events (in July, one of their articles was titled: “Video: this man drank a bottle of Jägermeister at once and then died”). The site’s publisher, Top News Hungary Kft., was founded at the end of 2018 by Cecília Rogán-Gaál and one of her friends, Kata Sarka, the former wife of TV presenter Péter Hajdú, who is often featured in tabloids. The company already achieved revenues of several hundred million forints in 2019 and 2020, and an extremely high profit margin of 60-80 percent, but the 2021 performance turned out to be even more spectacular.

According to the company’s official financial report, the 1.5 billion HUF (3.77 million EUR) revenue in 2021 came exclusively from the company’s core business, the publication of a website. We asked the company if they have any other sites besides TWN.hu, but they did not answer our other questions.

This business result is exceptional. According to 24.hu’s recent analysis, even sites with much higher traffic than Twn.hu (such as Mfor.hu or Wmn.hu) have managed to achieve much lower revenues (Mfor.hu’s publisher 62 million, Wmn.hu’s 250 million). Meanwhile, according to Gemius data, the unique visitors on Twn.hu’s site, based on aggregated monthly domestic traffic data, did not reach 3 million in the whole year 2021. For Mfor.hu, it was 8.2 million, and for Wmn.hu it exceeded 10 million.

We have not been able to find a similar example of market-based media companies. According to a report from 2021, before the pandemic, Hungarian media companies had an average profit margin, i.e. the ratio of revenue to profit, of between 3 and 5 percent. As 24.hu’s article pointed out, even their own publisher, Centrál Médiacsoport Zrt., one of the largest Hungarian media companies, had a profit margin of only 12.6 percent, after making a profit of 1.67 billion HUF (4.2 million EUR) on its 13.3 billion HUF (33.48 million EUR) revenue.

In other words, even this company, which is huge by Hungarian standards, publishing 18 print and 19 online newspapers, barely managed to make more profit than Rogán’s ex-wife’s company.

The way of money

Twn.hu is full of ads indicating where money can come from. Data is no longer available on who advertised on the site in the year when they produced the 1.3 billion profit, but in recent months there have been a number of ads linked to the government and its related economic actors.

One example is the travel TV show Poggyász, whose ad appears at the top or bottom of almost every article, and it is difficult to browse the desktop and mobile versions of the portal (at least it was in June and July) without seeing it. The show, which features Hungarian and foreign destinations, is broadcasted on TV2, part of the Fidesz media machine, and is produced in cooperative partnership with the Hungarian Tourism Agency (MTÜ), which is owned and supervised by the Rogán-led Cabinet Office of the Prime Minister.

We asked the Tourism Agency what a cooperative partnership means and whether they give money to the show, but they did not reply. According to data available on the MTÜ’s website, in 2017 the agency made a commitment of 443 million HUF  (1.115 million EUR) to Magno Studio Kft, the then-producer of Poggyász. This company had previously received funds from the Cabinet Office of Prime Minister, led by Antal Rogán.

Information sent in response to Átlátszó’s data requests shows that the company was a key player in several government advertising campaigns. According to the newspaper, the company received nearly 700 million HUF (1,76 million EUR) from the Cabinet Office’s 2018 “Stop Soros!” campaign, and a further 3.8 billion HUF (9.58 million EUR) from other government propaganda campaigns during the election campaign.

However, there are also ads directly related to the government on Twn.hu. In July, the latest short films of the government against the sanctions against Russia, praising the price freeze and the cuts in tariffs, appeared as embedded videos on the site. The ad, when clicked, takes the visitor to the official YouTube channel of the Government of Hungary.

The mobile version of the site previously featured Szerencsejáték Zrt.’s ads in several articles. The state gambling company is under the control of the Cabinet Office of the Prime Minister, headed by Antal Rogán.

In this case, it is not clear whether the state-owned company itself advertises on the site, as its advertisements are present on Twn.hu through Google Ads, Google’s advertising system. This system works by allowing advertisers to specify a target group to which they want to send their ad and Google Ads then selects where to place the ad in order to meet the criterias.

Google’s system, however, gives the advertisers – in this case Szerencsejáték Zrt. or its media agency – the opportunity to choose where their ads appear.

“Through Google’s system, you can set the specific location and site on which the ad should appear. This does not require the advertiser to contract directly with the site.”

– explained a digital advertising market expert to Direkt36, who asked not to be named because of the sensitivity of the topic.

The Cabinet Office of the Prime Minister said in response to questions about whether they had anything to do with the ads on TWN that they do not decide “on the media used in the campaign, but the agency itself, which puts together the media mix”

In its reply sent after the publication of our article, Szerencsejáték Zrt. wrote that they are not in contact with the media owners, because the “media planning and booking” tasks are “fully carried out by New Land Média Kft.” This firm is owned by Gyula Balásy, whose companies have won a number of high-value contracts from the state in recent years. Most recently, just two days ago, it emerged that the Rogán-supervised National Communications Office (NKoH) had signed a  75 billion HUF (188.8 million EUR) communications framework agreement with Balásy’s group.

While the tabloid topics covered by TWN may be popular, many other similar news sites offer such content, and analysis of Twn.hu’s traffic data shows that a large part of its already small readership is from so-called diverted or purchased traffic.

According to data from the international traffic analysis service Similarweb, between March and May 2022, more than 90 percent of Top World News’s traffic came from two news aggregation sites, Kapu and Hírkereső. These aggregators do not produce their own content but collect links of articles from other websites and organise it by topic. Kapu and Hírkereső sell this as a service to news sites, which can buy clicks by having their news appear on the aggregator sites. According to the common price list actual since 2020, the cheapest version of display, a link with a maximum of 55 characters of text on the home page, costs 320,000 HUF net (805 EUR) per day.

In the period between March and May, TWN also received traffic from other aggregators, such as Propeller, Hírnavigátor or Hírstart, but on several occasions it was also referred to as a relevant news source by ATV television channel’s website, Atv.hu, which picked up public, tabloid and traffic news from TWN. In several cases, Atv.hu also referred to TWN’s articles, when the original source of the news was not TWN but another news site or a social media post.

Although ATV continues to give space to opinions critical with the government, the channel – as reported in several articles by the news site 444 – and the group behind it have been the beneficiary of certain government and state decisions in recent years. For example, government advertisements have been run on ATV, and an association linked to the ATV group through its owner has also obtained a radio frequency thanks to the decisions of the media authority.

We asked ATV why they use TWN as a source, but they did not respond to our questions.

Clarification:
Our article previously stated that Magno Studio was a “regular contract partner” of the Cabinet Office of the Prime Minister. However, available documents show that the firm did not have a contract directly with the Cabinet Office, but was linked to an intermediary firm that handled the Cabinet Office’s campaigns. We apologise for the inaccuracy.

Médiapolitika
More in this project 
Direkt36.hu uses cookies, by clicking ‘Got it’ you accept this procedure.
If you need more information on cookies we use, how you can delete or block them, please, see our Privacy Policy.
Got it