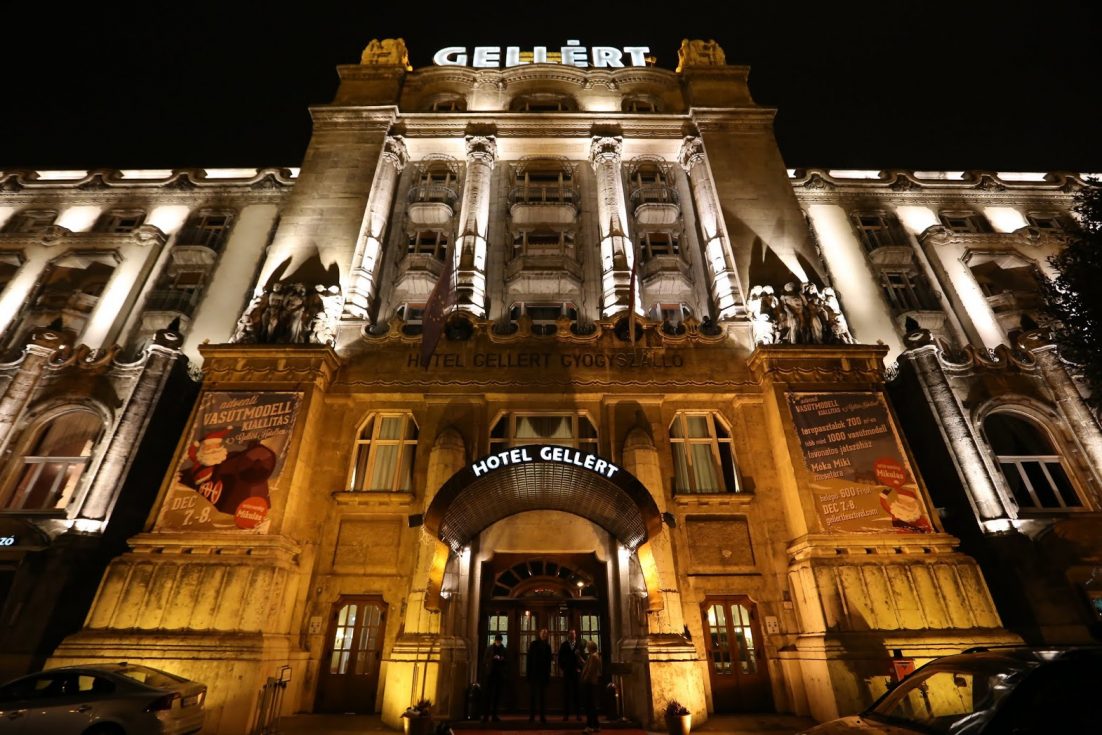 Hotel Gellért, one of Budapest’s landmark hotels, was sold by its British owner in 2019. The buyer was Indotek Group, whose majority owner Dániel Jellinek is one of Hungary’s richest people.

The sale of the hotel was publicly announced at that time, but the details of how Jellinek bought the prestigious property have so far been unknown. Direkt36 has found out that the deal was almost fully financed by the state-owned Hungarian Development Bank (MFB), which provided a 26.73 million euros loan for the transaction.

Even though Jellinek does not consider himself a government-friendly businessman, he has several business links to Prime Minister Viktor Orbán’s son-in-law István Tiborcz. And our investigation shows that in addition to Jellinek, other business partners of Tiborcz also received loans in millions of euros from the state-owned bank in the past years.

According to publicly available information about the bank’s loan portfolio, since 2019 it provided at least 166 million euros in loans to Tiborcz and the companies of businessmen close to him. Besides Jellinek, the companies of Attila Balázs, who is the business partner of Tiborcz and also has had deals with PM Orbán’s childhood friend Lőrinc Mészáros, received loans in the amount of at least 111 million euros.

Tiborcz and his associates received state loans through other banks too. Last spring the Hungarian Central Bank launched a program providing beneficial loans in order to help smaller companies struggling due to the economic impact of COVID-19. Direkt36 reported that Tiborcz and other companies owned by businessmen close to him obtained loans in millions of euros in the framework of this program.

Jellinek’s company group told Direkt36 that Indotek has in all cases selected the banks based on their applications, taking into account the financing costs as well as other aspects, such as the length of the bank’s considerations for a loan. Indotek chose MFB based on these factors, they said, and added that Jellinek’s business decisions are independent from politics.

The company group of Tiborcz told Direkt36 that they choose banks for financing purposes based on their incoming solicited loan proposals. They did not give more details about the loans, citing business confidentiality. The company group of Attila Balázs gave a general statement, saying that all of their investments were financed legally. The Hungarian Development Bank did not respond to our questions.

In the pursuit of state loans

The Hungarian Development Bank’s mission statement is to provide “favorable loan constructions to domestic companies and private individuals.” According to sources with knowledge about the bank’s operations this means that if the bank sees an economic development opportunity in a project, it may decide to provide a riskier or cheaper loan than available on the market by commercial banks, or offer more favorable conditions to companies.

It has been reported already that Tiborcz, who has in the past years become one of the country’s most prominent real estate investors, received MFB loans for two of his projects — 24 million euros for a hotel development in downtown Budapest and 2.5 million euros for the purchase of a hotel in the Tokaj wine region.

According to MFB, the information about which companies they provide loans and under what conditions is protected by bank secrecy. Therefore, the conditions of the MFB loans to Tiborcz’s company group are also kept confidential.

Nevertheless, some of the MFB loans are registered with mortgages on the companies taking up these loans or their daughter companies. The mortgage is listed among company data, and Direkt36 made a calculation of the loans connected to mortgages. According to our research, since 2017 MFB has provided such loans to 27 companies in the amount of 371 million euros. Approximately half of these loans went to Tiborcz and his associates.

One of these loans was provided to Dániel Jellinek’s Indotek company group for the purchase of one of Budapest’s most famous luxury hotels, Hotel Gellért. Active in real estate business, Jellinek is one of Hungary’s richest persons. The Hungarian Forbes magazine’s 2019 list of the 50 richest Hungarians estimated his wealth at 300 million euros and ranked him on 10th place, while in 2020 his 400 million euros wealth put him on 11th place.

Direkt36 has found that Jellinek received a loan from the state-owned MFB for the purchase of Hotel Gellért. Jellinek’s company group announced the purchase in June 2019. The transaction did not include the Gellért Spa located in the same building, which remained in the ownership of the Budapest municipality. Indotek at that time stated that they had plans to renovate the hotel, but did not disclose details of the purchasing price and its financing.

More information is available in a letter sent by the hotel’s former British owners in June 2019 to government representatives and Budapest District 11 municipality, where the hotel is located. In the letter, they informed the addressees about their pre-purchasing rights. The letter was not meant for the public, since its pages included the text “strictly confidential!,” but the document can be accessed with a simple internet search.

According to the document, Jellinek’s company did not purchase the property itself, but the company which owns the hotel with all its furniture and equipment. This company called Dome Ltd. was purchased for 27 million euros net, and Jellinek’s company had to provide a 1.5 million euros advance payment in the days following the signature of the contract. The document also stated that the remaining amount was expected to be covered in December 2019.

By that time Jellinek’s company group already received a significant loan from MFB for the financing of the hotel transaction. According to the financial report of one Indotek company, the loan amounted to 26.73 million euros. The details of the loan construction, such as its interest and other conditions, were not disclosed.

Jellinek’s national profile has risen as he established closer relations with government-close business circles. However, in his public statements he has downplayed the significance of his political connections. He told Forbes this year that he found it unfair to be labeled as a businessman close to the Fidesz governing elite (NER, in colloquial Hungarian), as he can cooperate with both sides and is not interested in politics, only business.

During the time of the Hotel Gellért purchase he also established a direct business connection with István Tiborcz, PM Orbán’s son-in-law. One of Jellinek’s companies sold Solum-Invest, the operator the Balatonfüred port at Lake Balaton, to one of Tiborcz’s companies. Previously, Solum-Invest was owned by Lajos Simicska, a former ally of Viktor Orbán who then later turned against each other. After the victory of Fidesz in the 2018 parliamentary elections, Simicska sold all his business interests, and after passing Solum-Invest through multiple owners it was purchased by Jellinek in January 2019.

Nevertheless, Jellinek also sold the company one year later. Approximately one month after obtaining the MFB loan for the purchase of Hotel Gellért, he sold Solum-Invest in January 2020 to real estate development company Appeninn, listed also on the Budapest Stock Exchange. The owners of Appeninn at that time included István Tiborcz and Lőrinc Mészáros, Orbán’s longtime friend. In April 2020 Tiborcz exited Appeninn, selling his shares to Jellinek. With this, Jellinek gained ownership again also in Solum-Invest.

In addition to doing business with Tiborcz, Jellinek has also received significant state support in recent years. He was one of the main beneficiaries of the controversial program of the Hungarian Tourism Agency to support Hungarian tourism. According to tender results published last year, the majority of the available funding went to government-friendly businessmen. Companies co-owned by Jellinek, such as Solum-Invest, won altogether more than 100 million euros in non-repayable financial grants within the framework of the program.

The businessman drew the attention again when last October Bloomberg reported that a business consortium led by Jellinek made a price bid for the purchase of Budapest Airport. According to the article, the offer was in line with the intentions of the Hungarian government, which has unsuccessfully tried to buy the airport in the past. Jellinek later confirmed that he indeed negotiated with the government, which offered him assistance in the issue.

A source with knowledge about Jellinek’s business activities told Direkt36 that Jellinek has close links to István Tiborcz. The companies of Tiborcz and Jellinek use the services of the same PR agency called Goodwill Communications.

Millions in euros to a sole company group

Jellinek is not the only one in Tiborcz’s circles who received significant state loans. The beneficiaries also include businessman Attila Balázs engaged in state construction projects who was also involved in the purchase transaction of the Balatonfüred port. When in January 2020 Jellinek sold Solum-Invest, in addition to Appeninn, Balázs also obtained shares in the company. Balázs purchased Mészáros’s shares after he left Appeninn.

According to Direkt36 calculations, MFB provided at least 111 million euros in loans to the companies of Balázs in the past years. Two of his companies received 38 million euros for the construction of a residential park in Budapest, while a third company obtained a 43 million euros loan in March 2020 for the development of a construction factory near the Hungarian-Romanian border.