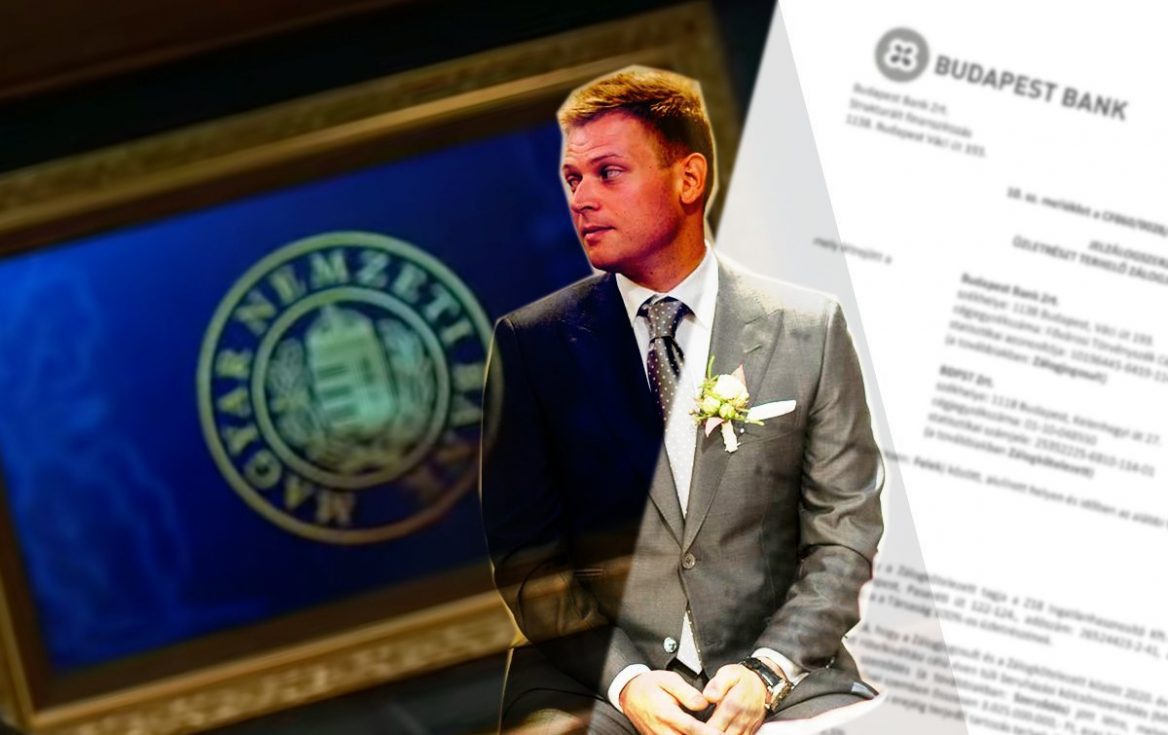 “A fantastic banking opportunity for early birds,” with his usual confidence, this is how governor of the Hungarian Central Bank György Matolcsy introduced the Central Bank’s favorable loan program at the beginning of last April. The aim of the program was to help companies struggling under the economic impact of the COVID-19 pandemic with more favorable loans than those based on market conditions.

The program was aimed at smaller economic players, typically micro-, small- and medium-sized enterprises. Its beneficiaries, however, also include István Tiborcz, Prime Minister Viktor Orbán’s son-in-law and currently one of the most important players on the Hungarian real estate market.

Tiborcz’s real estate company group makes an annual profit of millions of euros and, according to the estimate of Hungarian Forbes magazine last year, it has become the 60th most valuable Hungarian-owned company. Nevertheless, the company group still counts as a medium-sized enterprise based on the legal definition. One of its flagship companies is BDPST, which received an 8.3-million-euro loan through the Central Bank’s program. This loan replaced its earlier loan with a less favorable interest rate, taken for a real estate development project in Budapest.

According to Direkt36’s research, other businessmen linked to Tiborcz were also beneficiaries of the Central Bank’s so-called Loan Program for Growth. The company of Gábor Sájer, who was previously the head of Elios, Tiborcz’s company that won several public street lighting tenders, received a 4.7-million-euro loan. Márk Czéh-Tóth, the business partner of Tiborcz’s close associate, received an almost 2.8-million-euro favorable loan for the renovation of a prominent hotel in Pécs, in the South-West of the country.

The program runs with the refinancing of the Central Bank, which means that the Central Bank first provides the loans to commercial banks, which then give them to business companies. In all cases, Tiborcz and his business partners received the loans from state-owned banks – in the case of BDPST, from Budapest Bank. BDPST requested a favorable loan from a state bank despite previous statements by Tiborcz that he wanted to stay away from state or municipal affairs.

In the framework of the Central Bank’s Loan Program for Growth, 31 thousand companies received loans of different sizes within almost one year. According to the Central Bank’s statistics, more than half of the beneficiaries were micro- and small-sized companies, and the majority of them received loans in the amounts between 20 and 260 thousand euros. At the same time, the size of the loans given to Tiborcz and people linked to him was significantly higher.

Responding to Direkt36 inquiry, the Central Bank stated that out of 45,500 cases, the amount of the loan exceeded one billion forints (which totals to approximately 2.8 million euros) in 155 cases. Citing bank secrecy reasons, it did not say who their beneficiaries were. Regarding the loan of BDPST, it stated that it was not in the Bank’s purview to decide about the companies’ loans, nevertheless it would be unjustified to exclude firms from the program that have been profitable and efficient for several years. BDPST and Budapest Bank did not respond to our questions.

Last spring, the Hungarian government announced measures intended to ease economic difficulties caused by the COVID-19 pandemic. Among others, Hungary’s Central Bank, led by governor György Matolcsy, also introduced several steps. One of these was the relaunch of an earlier Central Bank program, under the new name Loan Program for Growth, with more preferable conditions.

The Central Bank gradually released 8.3 billion euros for the program, which was aimed at providing cheap loans for micro-, small- and medium-sized enterprises, with a maximum of 2.5 percent interest rates, in the amounts between 2,800 euros and 56 million euros for up to 20 years. The companies could use the loans for various purposes, such as investments, replacing other loans, but even for tasks related to their daily operations including salaries.

One of the applicants was BDPST, the company of István Tiborcz, which was founded in 2015 and has a significant real estate portfolio. Last year, the Hungarian Forbes magazine assessed that Tiborcz’s real estate company group – consisting of BDPST and its daughter companies – was the 60th most valuable Hungarian-owned enterprise. According to Forbes, Tiborcz’s company group was worth 32 million euros and it generated 16 million euros of profit in 2019.

BDPST has several real estate projects, one of them is the renovation of the Adria-palace located at Szabadság square in downtown Budapest. The company announced in March 2019 that it purchased the majority of the building with the help of a 8.3-million-euro from the state-owned Budapest Bank. According to documents from the company court registry, on top of a 2.5 percent interest rate the loan also had a variable interest rate based on a continuously changing amount.

Last July, BDPST replaced this loan with another loan from Budapest Bank, which it received in the framework of the Central Bank’s program, according to company court registry data. The amount of the loan was somewhat higher, namely 8.4 million euros, however, its interest rate was fixed at 2.5 percent. In addition to a lower interest rate, the switch also allowed Tiborcz’s company to avoid the risk linked to a fluctuating rate.

Tiborcz’s other companies also received public funds in the past. The firm called Elios won several public lighting tenders, in which the EU’s anti-fraud agency OLAF found irregularities. After officially stepping down from the company, Tiborcz said he understood that, as the Prime Minister’s family member, he had to stay away from state or municipal affairs. Nevertheless, BDPST received state loans multiple times, which, according to Tiborcz, were not grants but loans and therefore had to be repaid.

Budapest Bank provided a favorable loan also to the company of Gábor Sájer, one of Tiborcz’s associates. Sájer headed Elios between 2012 and 2016 when it won several public lighting tenders. Tiborcz and Sájer remained in touch even after they stepped down from Elios – as reported by the Hungarian news site Válasz Online, Sájer was the external adviser of Tiborcz’s company at the time when it purchased the Adria-palace.

Budapest Bank provided the 4.4-million-euro-loan to Sájer’s company Nexteen last October. According to data from the company court registry, Nexteen received the loan in the framework of the Central Bank’s COVID-loan program with a 2.5 percent interest rate. Nexteen owns several companies dealing with the construction of solar parks.

Nexteen told Direkt36 that based on the Central Bank’s stated goal of the “loan program introduced to support, increase, and develop new investments and provide operational funding for small- and medium-sized companies” the company was “eligible to participate in the program.”

Another beneficiary of the program was Márk Czéh-Tóth, who has indirect links to Tiborcz. The businessman from Pécs won five tobacco concessions in 2013 and established a company for their operation. Another company of his won a liquidation license in a state tender in 2014. In both firms the business partner of Czéh-Tóth remains Endre Hamar who has been Tiborcz’s close associate for a long time. Hamar owned shares in Tiborcz’s flagship real estate company BDPST, and Hamar’s law office continues to provide legal representation for BDPST.

Two companies of Czéh-Tóth – Hotel Palatinus and HotelKer – received favorable loans in the framework of the Central Bank’s program, according to documentation by the notarial chamber, which provides information about bank loans of companies. The two companies received the loan from the state-owned Hungarian Development Bank. Its size is not known, but a mortgage in the amount of 2.7 million euros was registered on the wealth assets of the two companies on behalf of the Hungarian Development Bank.

Last January, Hotel Palatinus and HotelKer announced that they had purchased the more than 100-year old Palatinus Hotel in downtown Pécs, in the South-West of the country, and that they were planning its renovation. As reported last May, in addition to a favorable loan, they also received 9.7 million euros in a non-refundable grant from the Hungarian Tourism Agency. The program received a lot of criticism for benefitting government-close businessmen despite of its stated goal to support tourism suffering under COVID-19.

Tiborcz and his associates did not receive the favorable loans from private, commercial banks, but from state-owned banks. If clients of state banks are unable to repay the loans, the financial risks lie on the state, and indirectly on taxpayers.