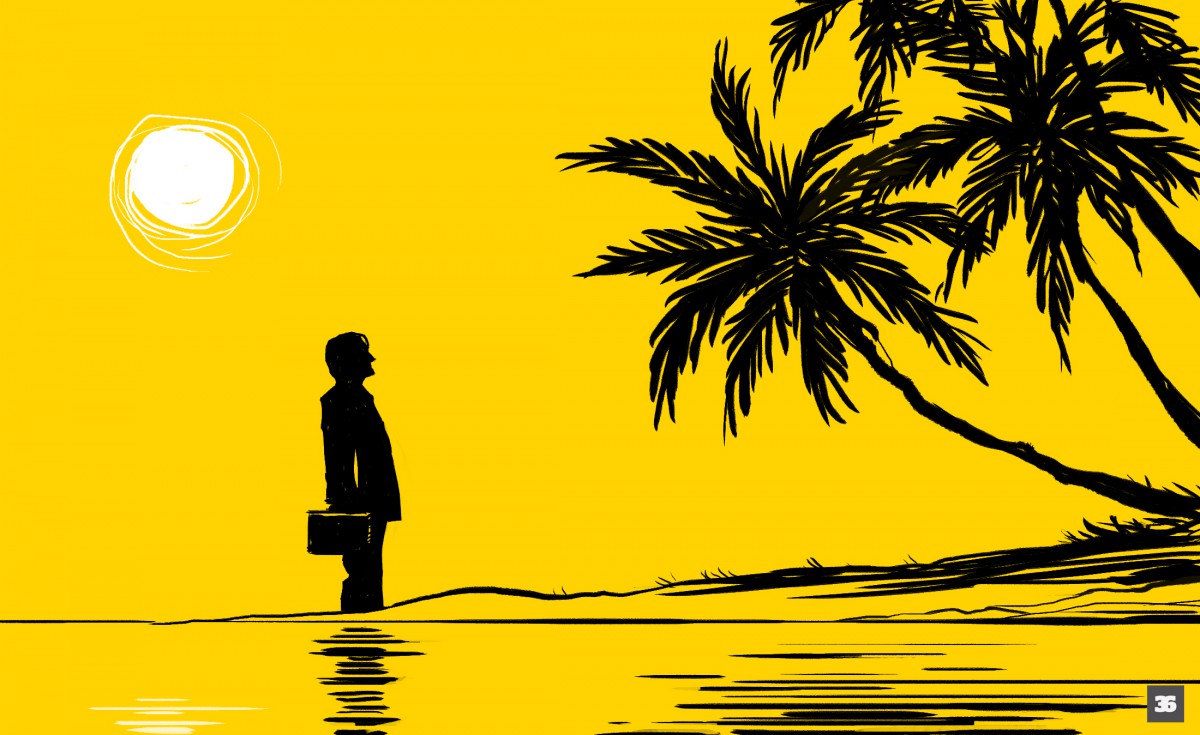 Zsolt Horváth was a member of Hungary’s national assembly for 16 years as a politician of Fidesz, the current governing party. Despite his long time in politics he kept a low profile. Now, after quitting frontline politics almost two years ago, he might get into the spotlight.

An unprecedented massive leak of offshore documents revealed that Horváth has had hidden companies. He is the only Hungarian politician who is personally implicated in the leak. The documents were obtained by the German newspaper Süddeutsche Zeitung and more than 370 journalists from 76 countries worked on it in a yearlong investigation by the International Consortium of Investigative Journalists.

From Hungary, Direkt36 was the only journalism organization participating in the project. The documents contain several dozens of Hungarian individuals with offshore interests. In the next few days and weeks we will publish articles about the most significant findings.

First we are telling Horváth’s story, who has been involved in two offshore companies. (Fidesz had two MPs with the name of Zsolt Horváth. This story is about the one who represented Kecskemét, a rural city. The other was representing Veszprém.)

The key findings of the story in less than a minute

Offshore companies, which are often registered in exotic countries, are used in general for two purposes. One of them is for minimizing the tax burden on income that a company or a person makes in other countries. Since the ownership data of these entities are in most cases very hard to acccess, these companies are also used for hiding assets or conducting shady businesses. It is because of these two characteristics that even though owning or using offshore companies is legal there have been major international efforts to crack down on their use.

Horváth’s offshore interests have also been hidden until now. When Direkt36 called him on the phone four weeks ago and asked him about his foreign business interests he claimed that he had no such activities. When we told him concrete names of companies he first asked “what do you want to know about them?” Then he repeatedly claimed that he had no such companies. Finally, he asked us to send him questions by email. He has not responded to these inquiries and did not take calls or respond to repeated messages either.

By law, Hungarian individuals should declare to the Hungarian tax authorities any income they make in other countries. Among the questions Horváth failed to answer was whether he had such income from the Seychelles companies and if he reported it to the tax agency.

Horváth, who, according to his biographies and wealth declarations, had neither savings nor involvement in serious business activities, appeared in a Seychelles-based company in October 2013 as a director. At that time he was still a member of the National Assembly and he should have declared this position in his wealth declaration but he failed to do it. A few months after he had left parliament in May 2014, he became a shareholder in another Seychelles company.

According to the leaked documents, both Seychelles companies’ activities are creating and trading toys. The papers do not contain specifics about the toys but Horváth had got involved in developing and selling a relatively new toy a few months before his parliamentary mandate ended. Since both Horváth and his business partner refused to answer Direkt36’s questions it is not clear whether the Seychelles companies have anything to do with the Hungarian toy development.

What are these documents?

The leaked documents come from a little-known but powerful law firm based in Panama, Mossack Fonseca that has branches around the world.

The firm is one of the world’s top creators of shell companies, corporate structures that can be used to hide ownership of assets. The law firm’s leaked internal files contain information on 214,488 offshore entities connected to people in more than 200 countries and regions.

Although this is not the first time that offshore documents are leaked, the scale of this one is unprecedented. The leak contains 11.5 million records, including e-mails, financial reports, passports and other company files.

Zsolt Horváth is one of the 140 individuals identified in the documents as current or former politicians and public officials. Horváth joined Fidesz in 1989 and was one of its representatives in parliament from 1998 to 2014. He has a medical degree and had been a practising dentist before devoting most of his time to politics. In 2000 and 2001, in the first Orbán government, he was a state secretary in charge in the Ministry of Healthcare. He was in this position for less than a year.

In Orbán’s second government, he did not get such a senior position. He was appointed only as a healthcare commissioner in November 2012 and his position was terminated a year later. He rose to speak in the parliament only occasionally and did not have many public appearances. “He was quiet in the meetings of the parliamentary group,” recalled one of his former fellow MP.

Horváth’s offshore involvement exposed by the leaked documents began in his last years in the parliament. In October 2013, he was appointed as a director in a Seychelles company called Excelle Media International. The leaked files do not reveal the owners of the company. The papers show only a nominal shareholder of Excelle, a firm linked to a Hong Kong based consultancy company. The firm did not respond to Direkt36’s questions.

Excelle Media took quick steps to start operating as a normal company. Two days after Horváth had become a director, the firm initiated to open a bank account at HSBC, one of the world’s biggest banks. It is not clear from the files whether the account was actually opened but another record shows that Horváth’s passport was verified in a London branch of HSBC. We asked Horváth several questions about the bank account but he did not answer any of them.

At the time of his appointment at Excelle Media, Horváth was still a member of parliament. He should have declared this position in his wealth declaration but he failed to do it. Filing a declaration is obligatory but nobody in the parliament verifies the content of the documents, except if the declarations are challenged by someone who has credible information that a declaration is false.

Then came the young

In the 2014, Horváth was not among the candidates of Fidesz. According to another former Fidesz MP, Horváth dropped out because his position had weakened in his hometown, Kecskemét,. “He lost his influence and got forced out,” said the politician.

Horváth gave a similar explanation about his departure from politics to a local news site. “Some young people came who were hungry, and not only in the parliament but also in enforcing their interests. Thank God, I had enough experience to recognize this and decided to step back,” Horváth told Hírösvény in February 2014.

He also said in the interview that he only had vague ideas on what he would be doing after leaving the parliament. The leaked documents show, however, that he became a shareholder of another Seychelles company, Mayer & Collins Trading Company just a few months later, in September 2014.

According to the records, the activity of both Excelle Media and Mayer & Collins is creating and trading toys. The documents also show that the companies conduct these activities in China, Hong Kong (which is also part of China), and Hungary.

Horváth and the Smart Egg

The files do not reveal specifics about the toys but Horváth got involved in the developing and selling of a Hungarian product called Smart Egg just when his tenure in parliament was about to end. The egg shaped toy has a labyrinth inside and the players need to find a way out of this with a wand. The toy was invented by András Zagyvai, a Hungarian architect, in 2007. He won the World Puzzle Championship Grand Prix Award in Washington with it in 2012. Zagyvai died in 2013.

In February 2014, Horváth became a co-owner of two Hungarian companies (Art Egg Kft. and Art & Smart Egg Kft.) that are both dealing with the toy. His parliamentary mandate ended in May but he already gave two interviews about the product for the state television channel in April. Horváth said that abroad the Smart Egg is mentioned as the next Rubik cube and he hoped that it would be just as successful. He added, though, that “this is very difficult because the Rubik cube is the etalon.”

The Smart Egg is available in some of the world’s biggest stores – like in Toys R Us or in Amazon -, and a digital version also was developed for mobile phones and tablets. According to its website, the toy is marketed by a Hong Kong based company. Information on the firm’s ownership is not available but a company presentation available online, lists a Hungarian individual, Imre Kökényesi, as the contact person.

According to his LinkedIn profile, Kökényesi has been working for most of his career on children products. He has also been involved in the development of Smart Egg in recent years. In 2012, he and Zagyvai gave an interview to 168 Óra, a magazine, and Kökényesi said that the worldwide marketing of the product will require significant investment.

“My estimation is that only the patent process would cost hundreds of thousands of dollars,” said Kökényesi. He added that promoting the product would take millions of dollars. Zagyvai suggested that he had limited financial resources for that. Kökényesi did not say anything about how they might get the necessary investment.

Kökényesi also refused to answer our questions, even though he probably knew details about Horváth’s offshore interests as well. According to the leaked records, Kökényesi is also involved in the Seychelles companies. He was appointed as the director of Excelle Media alongside Horváth and he owns the other half of the shares in Mayer & Collins.

Each of them owns shares worth of 50 thousand dollars in Mayer & Collins. Horváth failed to answer the questions on how much he paid for the shares and about his potential personal investment in the costly Smart Egg project. His wealth declarations suggest that he did not have much extra resource for either of this. He ended his career as an MP with no savings and 14 million forints (50 thousand dollars in debt.