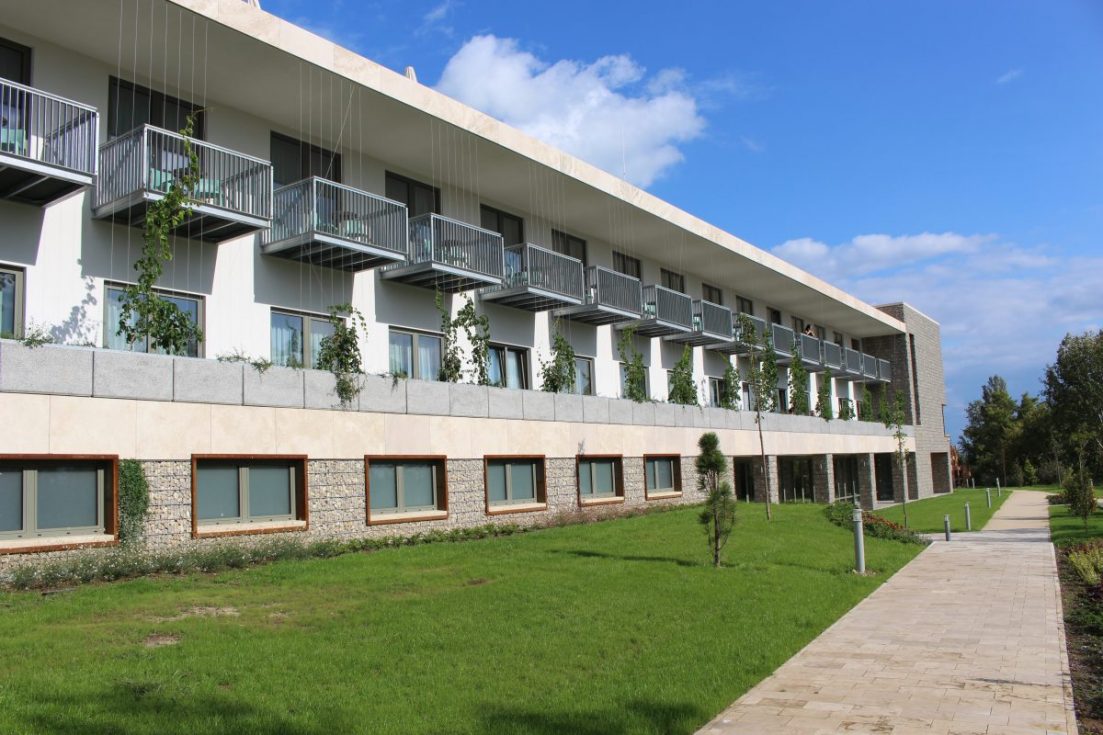 The Hungarian town of Balatonfüred decided to build an academy for talented kids playing handball. The plan was reasonable, since the town has a great tradition of handball. In this season, the local team is one of the leading groups of the national league, and their youth teams also compete in several age-groups.

The construction of a two-storey building, originally planned to be a student hostel, ended this spring. However, the building started to function as a four-star hotel. Its name, Academy Sporthotel is the sole reminder of the building’s original purpose.

The hotel is located next to the new swimming pool of Balatonfüred. Both were built as a part of the corporate tax benefit scheme that was introduced in 2011 by the Hungarian government. The scheme allows profitable companies to use part of their corporate tax to support five ‘spectacle sports’ – football, handball, basketball, water polo and ice hockey – or the Hungarian Olympic Committee. Clubs and other sport organizations can submit their project plans to the respective sport federations to receive subsidy for the training of youth and related investments.

Municipalities cannot tap these subsidies, but Balatonfüred found a way to surpass this restriction. Two foundations were established to support handball and water polo talent management programs in Balatonfüred and its region. Although the foundations are legally independent from the town hall, the mayor of Balatonfüred previously admitted to Direkt36 that their aim is to benefit from the tax scheme (read our stories on the construction of the swimming pool here and here).

“The hostel became a hotel”

During a local council meeting in October 2016, the mayor of Balatonfüred, István Bóka announced a tender for the operation of the building. He told local representatives that the foundation will sign a contract with the operating company in order to comply with the pledges the foundation had made to the Hungarian Handball Federation, ensuring that the building will be run as a student hostel.

The construction was finished this spring and the hotel’s Facebook page was launched in May. From the beginning of June, the hotel started to advertise its rooms and package offers. Since then, they published only three sport related posts, but none of them had anything to do with youth handball teams or students.

In September, Direkt36 visited the site and only found hotel guest taking sunbath on the balconies of the hotel, instead of youngsters playing or training handball. At the reception, we asked for a bid for a long weekend in October. The best offer was a standard room for 80 thousand forints (265 euros) for two nights, but we learned that there is also a suite with jacuzzi that would cost 100 thousand forints (330 euros) for two nights.

In the middle of November, we returned to Balatonfüred with the crew of RTL Klub TV channel. We asked questions about the handball academy, but the hotel staff had no idea about it. When we told them that, according to public documents, this building should be a student hostel they simply answered: “the student hostel became a hotel”.

They call it a test run

We tried to ask questions from the foundation that owns the property. One of its employees that manages daily tasks stated that he is not allowed to answer press enquires, while the chairman of the foundation sent a message saying that he was unable to reply as he was in hospital. Finally, we emailed our questions to the foundation. Despite what we have seen at the hotel, the foundation answered that the academy was built according to the original plans. “As it was planned, 2017 is a transitional year. During the previous months, we operated a test run. At the same time, several sportsmen […] had the chance to stay at the hotel for a reduced fee,” the foundation stated. It also added that “during the next period” the issue of accommodating young handball players will be solved.

We reached out to the company operating the facility and asked them to reveal the details of their contract, but they did not reply. The Hungarian Handball Federation said that constructing a hotel from tax benefit scheme is against the rules, but the decision to support this investment was made by the federation’s previous leadership.

The Ministry of Human Capacities, the state body responsible for the supervision of the tax benefit program, first refused to give detailed information about the investment. After our second visit to Balatonfüred, we contacted the Ministry again, and asked whether they know that a hotel was built in Balatonfüred instead of a student hostel. The ministry replied that it had launched an inquiry into the project.

Tapped tax benefits
More in this project 
Direkt36.hu uses cookies, by clicking ‘Got it’ you accept this procedure.
If you need more information on cookies we use, how you can delete or block them, please, see our Privacy Policy.
Got it
