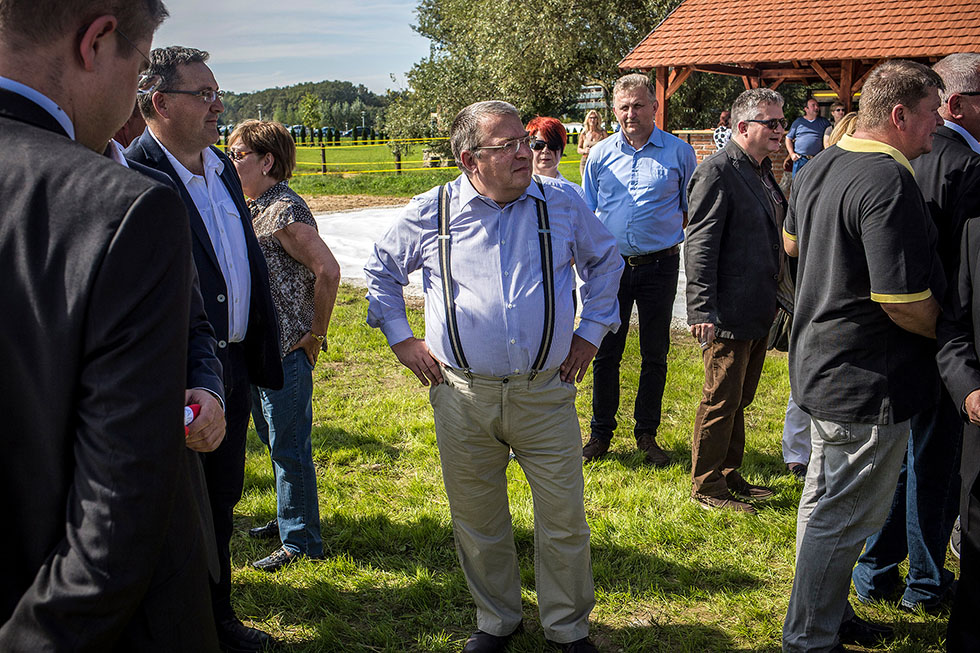 Earlier this year, we published a story about Lajos Simicska, who had been a close ally and friend of Viktor Orbán for decades. Then they had a falling out and Simicska launched a campaign to defeat Orbán but eventually the prime minister proved to be stronger. In this article we told how Simicska got defeated. Now we are telling the story how we conducted our research.

We were driving slowly on the icy and bumpy dirt road. We had been in the area for hours, but we haven’t found the person we were looking for, so we were about to leave. Then a Land Rover Defender jeep appeared in the distance. The vehicle drove by us at high speed, defying the road conditions, but it was enough to see who was behind the wheel – the person we had been looking for.

The driver was Lajos Simicska, one of the most influential figures of the past thirty years in Hungary. My colleague, András Szabó, and I had been gathering information about him for several months and finally wanted to confront him what we had found.

Simicska was the ally and friend of prime minister Viktor Orbán for decades. Together they turned Fidesz, now the governing party, into Hungary’s dominant political force. Orbán led the charge on the frontline of politics, while Simicska worked behind the scenes to provide a solid financial background for the party. Their alliance ended in 2014 over apparent power struggles, turning Simicska into one of Orbán’s most formidable enemies.

In the end, Simicska was forced to accept defeat. Days after the 2018 April parliamentary elections, which resulted in yet another landslide victory for Orbán’s party, Simicska shut down two of its news outlets. Not much later, he sold all his business interests.

At the time, several articles appeared in the Hungarian press analyzing Simicska’s fall and initially we did not even think of devoting more attention to his story. Usually, we try to avoid diving into topics that are covered by the rest of the media. It soon turned out, however, that it was worth looking more closely at what led to the failure of Simicska.

My personal curiosity also played a role in this. I had reported extensively about Simicska’s activities, especially between 2010 and 2014, when he was at the peak of his power. It was during that period that his group of companies, fueled by public contracts, became one of the country’s biggest business empires, while government institutions and state-owned companies were full of people connected to him.

At the time he was such a dreaded figure that many did not even dare pronounce his name. At least I remember clearly that when I approached potential sources they often hung up the phone when I mentioned that I wanted to talk with them about Simicska. (Meanwhile, it turned out that he had an entertaining side as well. I had a telephone conversation with him in 2012, where he complained about my stories about him, but he did this in a sarcastic and snarky way. He also did not seem to be completely sober during the call.)

In the last five years, now at Direkt36, I wrote only sporadically about Simicska but I kept an eye on him and occasionally talked to sources close to him. At the end of last summer, I had a couple of such meetings, and based on what I heard it became clear that the full story of Simicska’s fall had not been told yet. I discussed this with my colleagues and we decided to dedicate more resources to find out what exactly happened. Simicska may have lost his power but, after all, he had been one of Hungary’s most influential people for decades.

So, I started looking for people who were close to Simicska during his conflict with Orbán. The oligarch had had a small circle of confidants who had been famously reticent with the press. But now that Simicska’s empire collapsed, it was somewhat easier to persuade them to talk. We managed to speak with people who would have turned us down even a few months before.

However, it wasn’t easy with everyone. For example, I contacted a longtime confidant of Simicska who first said that he needed time to think about my request. After a few days, he got back to me with saying that he was open to a meeting. But then the day after he sent me another message – he changed his mind. Finally, I managed to persuade him to meet me by telling him that he did not need to share any new information with me. He would just have to listen to what I learned so far and tell me what he can confirm and what he cannot.

Of course, this was a confidential conversation like almost all the other ones. When reporting on sensitive issues it is common that sources only provide information on the condition that we don’t reveal their name. This would not necessarily be a problem, especially if they could provide documents that prove what they say. With this story, however, we could not hope for finding a paper trail. The most important events took place behind closed doors, without anybody recording them in any way.

Thus, the only way to write this story was to talk to as many sources as possible, preferably with those who were directly involved in the events. Even so, we have taken extra care to publish only such information that we could corroborate from several independent sources (especially about such sensitive episodes when we described how Simicska feared for his life and purchased radiation protection devices).

Of course, we tried to speak with Simicska as well. I had a phone number for him, but he never answered my calls, so at the end of November, András Szabó and I sat in a car and went to the Hárskút, a village in Western Hungary. We knew from our sources that the former oligarch was spending most of his time in this quiet village. His family’s only remaining business, a livestock farming company, is operating there too.

We were near that farm when we spotted Simicska in the speeding Land Rover. Although we immediately turned around and tried to follow him, he went so fast that we had no chance of catching up. Eventually, however, following the dirt road, we arrived at a farm with the Land Rover in the yard.

We called his name a few times and he finally stepped out of the door with a coffee cup and a cigarette in his hands. Unfortunately, he really just wanted to drink a coffee and smoke a cigarette, and when we asked him to talk to us, he kept repeating that we should leave him alone.

The formerly powerful oligarch did not look tough or aggressive. If anything, he seemed rather exhausted and resigned as he asked us to leave. After a while he didn’t even react to our questions, just turned his back towards us and smoked his cigarette. It was strange to see this from a man who a few years earlier was considered one of the most influential figures in Hungary.