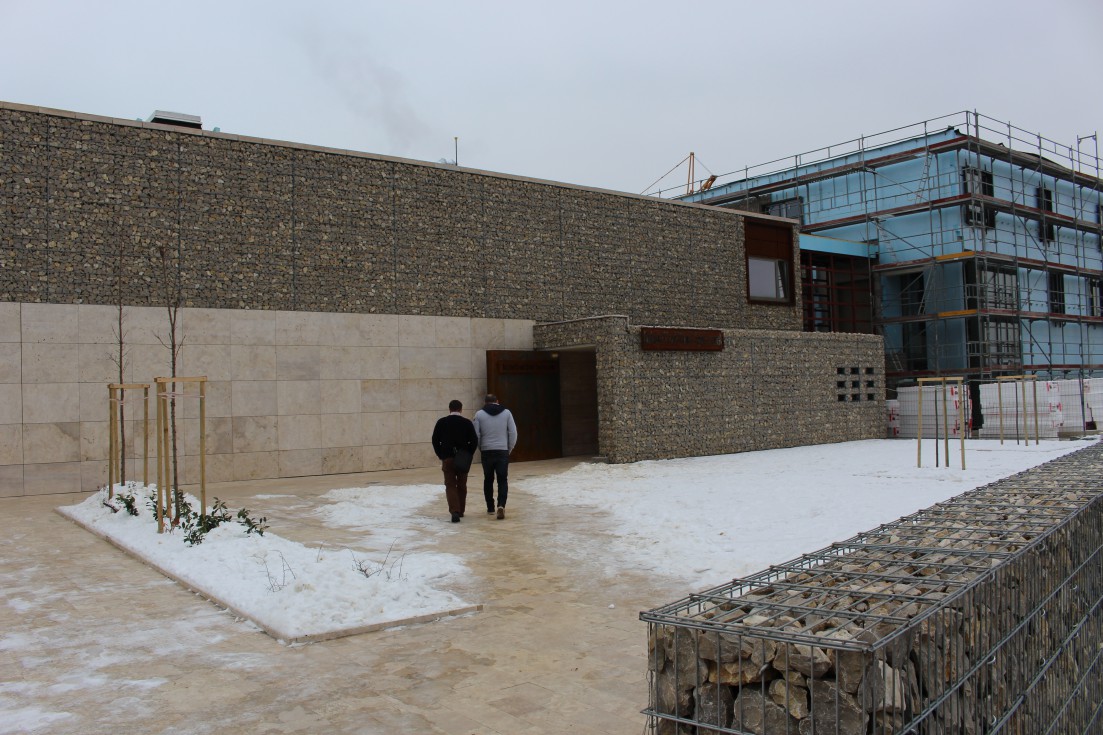 The Hungarian town of Balatonfüred, in spite of lying beside the country’s biggest lake, does not have a big tradition of water polo: even if there were some fans in the town, Balatonfüred never had a professional team and licensed players. In June 2011, however, the municipality decided to create the Public Benefit Foundation for the Water Polo of Balatonfüred. Despite its name, the most important task of the organization was other than supporting water polo. Through the foundation, the town was able to tap state subsidies that had not been available for the municipality for the construction of a local swimming pool.

Many locals had long been dreaming about an own swimming pool, but due to its high costs, before 2011 the investment had been out of question at city council meetings. The situation changed when the government reshuffled the corporate tax system and offered tax-breaks for companies that support certain spectator sports.

This is the money that Balatonfüred jumped on. In order to receive the funds, however, the town had to use a trick. As the corporate tax benefit scheme known as TAO programme was not designed to finance municipal investments, the local government of Balatonfüred hid behind the foundation in order to receive several millions of forints for the swimming pool. While this is not unlawful, it goes against the principle and aim of the scheme. What is more, during the longer-than-expected construction, the cost had been continuously increasing, in total by more than several million forints compared to the original plans.

Istvan Bóka, the town’s mayor belonging to the governing Fidesz party, does not hide that the foundation was primarily created in order to get the money. He thinks that there is no problem, as the investment is an old dream coming true, which makes everyone happy. Commenting on the fact that this was only possible thanks to the circumvention of the rules, he said: this is a very good scheme.

Prime Minister Viktor Orban is also proud of the program. In an interview given in 2013, he called the results of the first two years of the scheme strikingly promising. „We do not want to win laurels for the government, nor for the local mayors. Instead, we let and even motivate local businesses and sport organizations to look for each other,” Orbán said as he described the aim of the TAO scheme.

„It is certain that Füred badly needs a swimming pool. At the shore of Lake Balaton, children must know how to swim properly, as their life can depend on this,” a mother of two living in Balatonfüred told Direkt36. Not only her, but both older and younger residents complain that although there are several indoor swimming pools in Balatonfüred’s wellness hotels, most of these hotels offer expensive tickets and do not welcome school groups. Thus, before the construction of the swimming pool, residents of Balatonfüred did not really have anywhere to go and it was difficult to find a location in town for children’s swimming lessons.

The plan to construct the swimming was first mentioned in a 4-year economic plan of the municipality, written in April 2011. „Balatonfüred is quite well-off financially, but, according to the town’s leadership prevailing approach, it is better to carry out investments from subsidies instead of the town’s own resources. When this TAO opportunity came, we indeed took advantage of it,” a member of the municipality told Direkt36, on condition on anonymity.
By amending the legislation on corporate tax in July 2011, the government made it possible for profitable businesses to use a part of their tax to support five spectator sports - football, handball, basketball, water polo and ice hockey – or the Hungarian Olympic Committee. Clubs and other sport organizations can submit their project plans to the respective federation to receive subsidy for the training of youth and related investments. If the plans are accepted, it is the federation’s task to collect the necessary money from the businesses that pay corporate tax.

Municipalities cannot tap these subsidies. This is why the leadership of Balatonfüred decided in 2011 to create a foundation that can apply for the grant – however, they made a mistake that made it clear that it was only a trick.

It’s legal, but something is not right

Municipalities cannot create foundations. This is why the Balatonfüred municipality entrusted one its own businesses to set up the foundation. The mayor argued that this was the municipality “can exercise full control” over the foundation, the minutes of the municipal meeting. The mayor told Direkt36 that the if there had been a possibility, the municipality would have carried out the investment, but “it was set who, and for which purposes can receive the TAO subsidy.” He said that the scheme was a very important opportunity to develop the town’s infrastructure. “We wanted to have an asset that is not owned by a sport association, but stays in the indirect ownership of the town itself.”

The trick worked. The past five year’s data on TAO shows that the Foundation for Balatonfüred’s Water Polo was the best at jumping on the TAO money designated for water polo. In the first year, they received the highest amount of money, ahead of long-standing water polo clubs.

The swimming pool, which increases in size and price

The construction hardly started, when the foundation asked for – and received –442 million forints in addition, for covering the swimming pool. The mayor argued that the initial 500-million plan could not be carried out, this is why „we had to restructure the whole story”. The originally planned 25-meter swimming pool became 33 meters long, and a wellness section with saunas and jacuzzis was added to the plans, raising the cost to 1.2 billion forints. The second, 606-million-forint job was given to Mech Vill Kft. without announcing a public tender.

According the mayor, the increased budget is not excessive, as „nowadays such a swimming pool cannot be build for less than 2 billion forints.” The benchmark numbers of the Hungarian Water Polo Associations – published annually since 2012, including the suggested maximum price to be paid from TAO money for certain equipment – are lower. Calculating with the association’s suggestions, the construction of the Balatonfüred swimming pool should have cost a maximum of 605 million forints. According to Mayor Bóka, from this amount would be enough only for a swimming pool without changing rooms, although the association claims that the price of the changing rooms are also calculated in the maximum price.

In the end, the foundation did not even have to pay anything from its own sources, as the swimming pool was declared to be one of the future locations of the swimming championship to be organised in 2021. The government even declared the construction of the Balatonfüred swimming pool as priority investment and handed 350 million forints of state support for the municipality.

Although the foundation was set up with the aim to support the training of the new generation of water polo players, many signs suggest that in the first years of its functioning it did not have any activities apart from those connected to the swimming pool investment. For example, applying for the TAO subsidies, the foundation admitted that there was no training for water polo players in Balatonfüred. Mayor Bóka firmly told Direkt36 that straight after the creation of the foundation water polo trainings commenced in Balatonfüred, however, many signs contradict his statement.

Until 2014, the Foundation for the Water Polo of Balatonfüred did not have any income from member fees or from other activities, according its project proposals submitted to the Water Polo Federation. The foundation did not have any expenses either, which means that they did not spend money on trainers, on renting fees of the swimming pool or on any training-related expenses. The foundation first presented a team at a championship – the Transdanubia Water Polo League – in the 2014/2015 season, and it has licensed players only since 2013/2014. In the first year, this was not a prerequisite for applying for TAO subsidies, but since then the rules have been changed and now it would be impossible to receive money without presenting a team at a championship.

The Ministry of Human Capacities is responsible for inspecting the swimming pool investment, and the inspection is currently in progress, according to the Water Polo Federation. The ministry did not answer our question whether the foundation used the grants lawfully. The federation stated in general that they decide about subsidies based on strict regulations, and it is an important factor whether the application is in line with the professional goals of the federation. As the declared aim of the program is the establishment of new swimming pools, these kinds of applications, in theory, are always supported by the federation. They added that since the launch of the TAO system its regulations on awarding subsidies have somewhat changed, but one of the decisive factors – besides serious professional work – remains whether the planned investments could be used by a broad audience.

Now the money comes from basketball

The pool opened this January, and there are already water polo trainings held regularly, yet it is unclear who organizes them. On paper, there are two Balatonfüred organizations authorized for the task, but partly the same trainers and leaders work at both organizations.

One of them is the Public Benefit Foundation for the Water Polo of Balatonfüred (which oversaw the construction of the pool), the other one is called Balatonfüred Youth Sports Club. Although local parents only ever heard about the training courses of the latter, both organizations are entitled to TAO subsidies. The trainings are held together, but there are two different water polo teams. There was even an occasion when the team of the sports club and that of the foundation played against each other. István Makó, a leader from both organizations did not answer to our questions regarding the trainings and the TAO subsidies.

Now that the construction of the pool has been finished, the Public Benefit Foundation for the Water Polo of Balatonfüred has no more opportunities to get a considerable amount of TAO subsidies for water polo. So it changed its name to Public Benefit Foundation for the Sports of Balatonfüred in 2015, then applied for TAO subsidies related to basketball games. The 200 mn HUF that it got for the goal is now spent on building a secondary school gymnasium. The foundation promised to hold regular basketball trainings for local children.

Tapped tax benefits
More in this project 
Direkt36.hu uses cookies, by clicking ‘Got it’ you accept this procedure.
If you need more information on cookies we use, how you can delete or block them, please, see our Privacy Policy.
Got it
