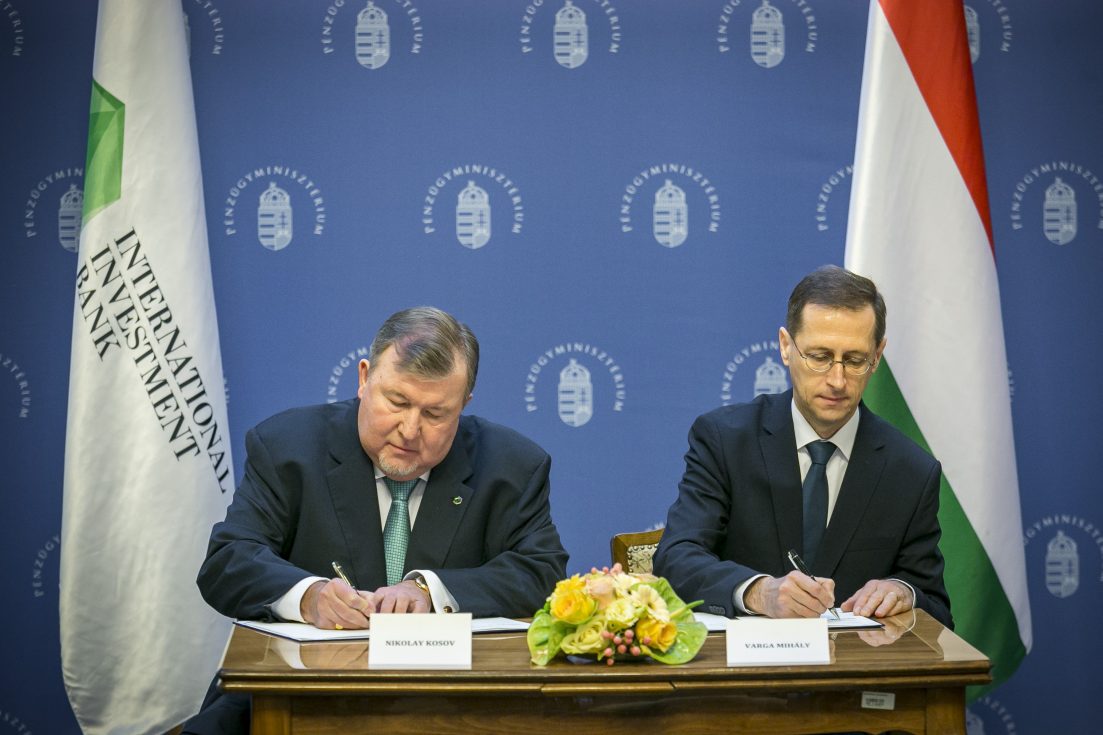 Panyi Szabolcs 2019.12.21. 3 Comments
Have a good story? Contact us!
In collaboration with

Hungary’s government agreed to limit the number of people who could receive diplomatic immunity in Hungary as staff or guests of the International Investment Bank (IIB). Only one or two dozen of them would receive immunity, Direkt36 has learned. The bank relocated its headquarters from Moscow to Budapest this summer.

For months, there has been a major disagreement between the Hungarian and U.S. governments over IIB. The U.S. is openly opposed to the bank’s relocation to Hungary, because they believe the bank’s presence offers no real economic benefits, while Russia can use the bank to expand its “malign influence over the region”. Most recently, after the Hungarian parliament’s Hungarian-American friendship group’s meeting last week, the group’s chairman said that there are still disputes between the U.S. and Hungarian governments about the bank’s relocation. U.S. Ambassador to Hungary David Cornstein had similar laments.

In addition to the U.S., Hungary’s other NATO allies are also disturbed by IIB’s presence in the Hungarian capital. Several EU diplomats in Budapest have told Direkt36 that the Americans are not alone in fighting the bank. They are coordinating their actions with diplomats of the United Kingdom, who also aim to curb the Russian bank.

As a result of their protests, the Orban government has made several concessions in recent months. For example, they promised that Hungarian and U.S. intelligence services would cooperate closely in monitoring the bank. The Hungarian government also accepted that the IIB could not have its offices near the diplomatic representation of either the United States or any other NATO member state (it was revealed this week that the IIB will be based in the Chain Bridge Palace). However, one issue that still bothers Hungary’s allies is diplomatic immunity granted for bank employees and guests.

“Just a matter of courtesy”

According to the agreement on the bank’s relocation, adopted by Hungary’s parliament earlier this year (Act XI of 2019), the bank’s staff will be granted diplomatic immunity. Quite precisely, the agreement states that bank officials enjoy various privileges and immunities “in performing their official duties while in Hungary”.

Diplomatic immunity is available primarily to diplomats working in Hungary. To put it simply, the immunity means that, besides all kinds of tax exemptions, they cannot be arrested by the authorities of the host country or be tried by the court unless the sending country waives the immunity. If they commit a crime – such as espionage – and get caught, they can be quickly evacuated from the country. The immunity protects them throughout their stay in the host country and in all their activities there. For this reason, many foreign intelligence officers arrive in the country of destination officially as a diplomat. The U.S. claims that the bank can also be used to send spies to Budapest, who can then move freely across the European Union and even enjoy diplomatic protection.

So far, however, there is no evidence to support allegations of spying. Georgy Potapov, Deputy Chairman of the Board of the International Investment Bank told Hungarian daily Nepszava in June that “we will say it again and again when we are asked: we are not spies, we are not a spy organization, that’s not why we are in Budapest. However, all our colleagues go through (national security) screening before they get their work permit and diplomatic immunity.”

The importance of the disagreement over the diplomatic immunities is illustrated by the fact that, before Russian President Vladimir Putin’s visit on October 30 to Budapest, Hungary’s government started but soon stopped granting diplomatic status according to public information. For the time being, only IIB chairman Nikolay Kosov and his wife received immunity.

This is the debate in which the Hungarian government introduced a new argument at the end of the year and made another concession to reassure its anxious allies. In a written response to Direkt36, Hungary’s Ministry of Foreign Affairs and Trade (KKM) stated that neither the IIB chairman nor his staff “actually enjoy diplomatic immunity”. Kosov and his staff are only granted “functional immunity limited to matters related to the performance of their official duties“.

Functional immunity is similar to diplomatic immunity, but it provides a narrower scope of protection because it is limited to official matters only. Typically such functional immunity is not granted to real diplomats, but to administrative, technical and other support staff at embassies or to honorary consuls.

The Hungarian foreign ministry claims that, by law, IIB enjoys only functional immunity in Hungary, similar to that of the European Investment Bank, the Budapest office of the European Bank for Reconstruction and Development, or the International Federation of Red Cross and Red Crescent Societies.

A Hungarian foreign ministry official told Direkt36 that although IIB chairman Nikolay Kosov is indeed among the diplomats accredited to Budapest in the official diplomatic database of the ministry, he too only received functional immunity. Putting Kosov’s name on the list of accredited real diplomats “is just a matter of courtesy, to show that he is heading an international institution,” according to the source. The ministry official explained that this is because, for example, if someone arranges a reception for the heads of international institutions or banks, then Kosov will also get an invitation as he is on the list too. “Even local heads of the UN, UNICEF etc. enjoy full, meaning much broader diplomatic immunity than Kosovo,” the source said, explaining why they think that the status granted to Kosov is insignificant.

Contradicting the Hungarian government’s claims, however, at an IIB event in November, Kosov said that he and his wife do have diplomatic immunity.

“It was and remains a bad idea”

The Hungarian government’s argument did not reassure the U.S., Direkt36 has learned. “We don’t see a distinction between diplomatic immunity and functional immunity, you can call it this or that, any kind immunity given to the bank’s staff is extremely problematic,” a U.S. State Department official familiar with the dispute over the IIB told Direkt36. According to the source, the U.S. “Ambassador’s position is that we don’t need a hundred Russians running around with diplomatic immunities in Budapest. Why does such a small bank coming from outside of NATO need so many people? Compared to the bank’s size and financial weight it doesn’t make sense.”

IIB deputy chairman Georgy Potapov told Nepszava in June that in the first phase, 50 to 60 employees would start working in Budapest. But once the bank had found a permanent headquarters, “only those will remain in Moscow who deal with non-EU countries, plus the IT and administrative departments, about 25 people. Everyone else is coming, the total number will be around 110 people.”

The U.S. is so concerned about the bank’s presence that it made the Orban government agree to limit the number of people who can come to Hungary with any kind of diplomatic immunity as an IIB employee. According to our information, the Hungarian government has agreed not to grant immunities to more than one or two dozen people. This maximum number will include not only the bank’s permanent staff but also temporary experts and guests.

Multiple sources familiar with the deal told Direkt36 that, despite the agreement, it is still the main goal of U.S. diplomacy to completely eliminate IIB from Hungary. This was confirmed by the U.S. Embassy in Budapest, who replied to our inquiry by writing that “it was and remains a bad idea to bring the International Investment Bank to Budapest. Any small economic benefits are vastly outweighed by the risks of Russia utilizing the bank for malign purposes. (…) This issue is the subject of continued discussion. The Embassy has received certain assurances that address some of our concerns, but this so-called “bank” will continue to pose a threat so long as it is based on the soil of a NATO Ally.”

According to Czech weekly Respekt, the U.S. is heavily lobbying against the bank in Prague too. As the Czech Republic is also a member of IIB, according to Czech law, the bank’s relocation to Budapest had to be approved by the Czech Senate. However, according to Respekt, the vote was due in October and the Senate wanted to vote down the relocation, supporting instead the country’s withdrawal from the bank. To avoid this from happening, the Czech government decided to withdraw the agreement on the relocation before the Senate could have voted. Meanwhile, according to the Czech weekly, the Orban government is encouraging the Czechs to remain members of IIB and even increase their capital.