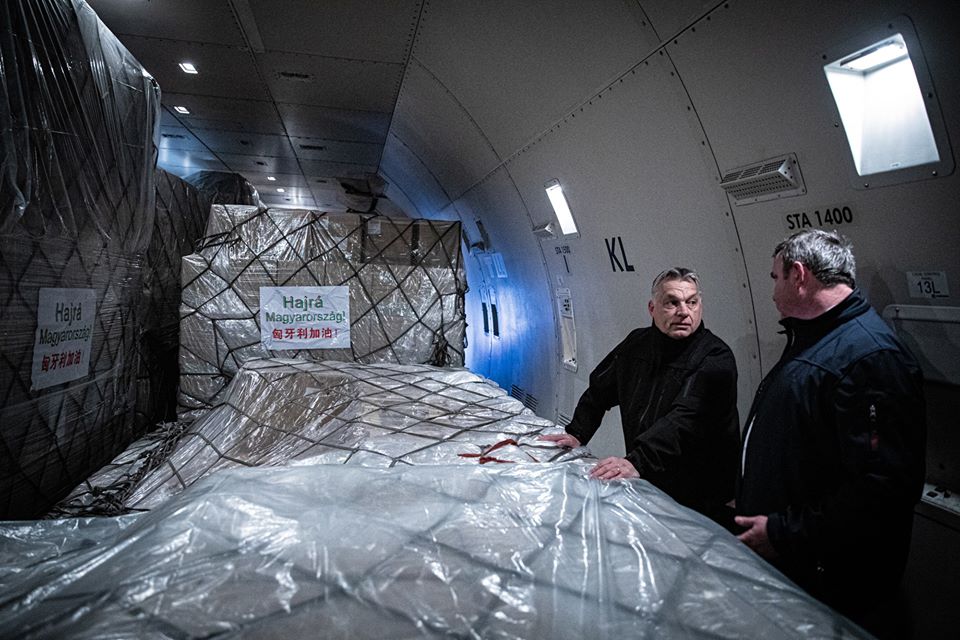 Update (May 4, 2020): Following the publication of this article, on May 3, the Chinese authorities further expanded the list of companies with an export license to include the Hybribio Biotech Ltd, which delivered 30 thousand PCR tests to Hungary.

On the evening of May 3, Semmelweis University issued a statement emphasizing that the tests purchased from Hybribio are not rapid tests but PCR tests, currently delivered by the company to Hungary and other countries as well. “According to international studies and a comparative study by Semmelweis University, the PCR method remains the most reliable method for identifying the virus,” the university wrote.

In a letter on March 27, the Hungarian government expressed its gratitude for 30 thousand coronavirus tests that had arrived from China to Budapest a few days earlier.

“The friendly relationship between China and Hungary has never been stronger and we look forward to collaborate closer with you in the future,” wrote Balázs Gazsó, State Secretary for Administrative Affairs at the Ministry for Innovation and Technology. 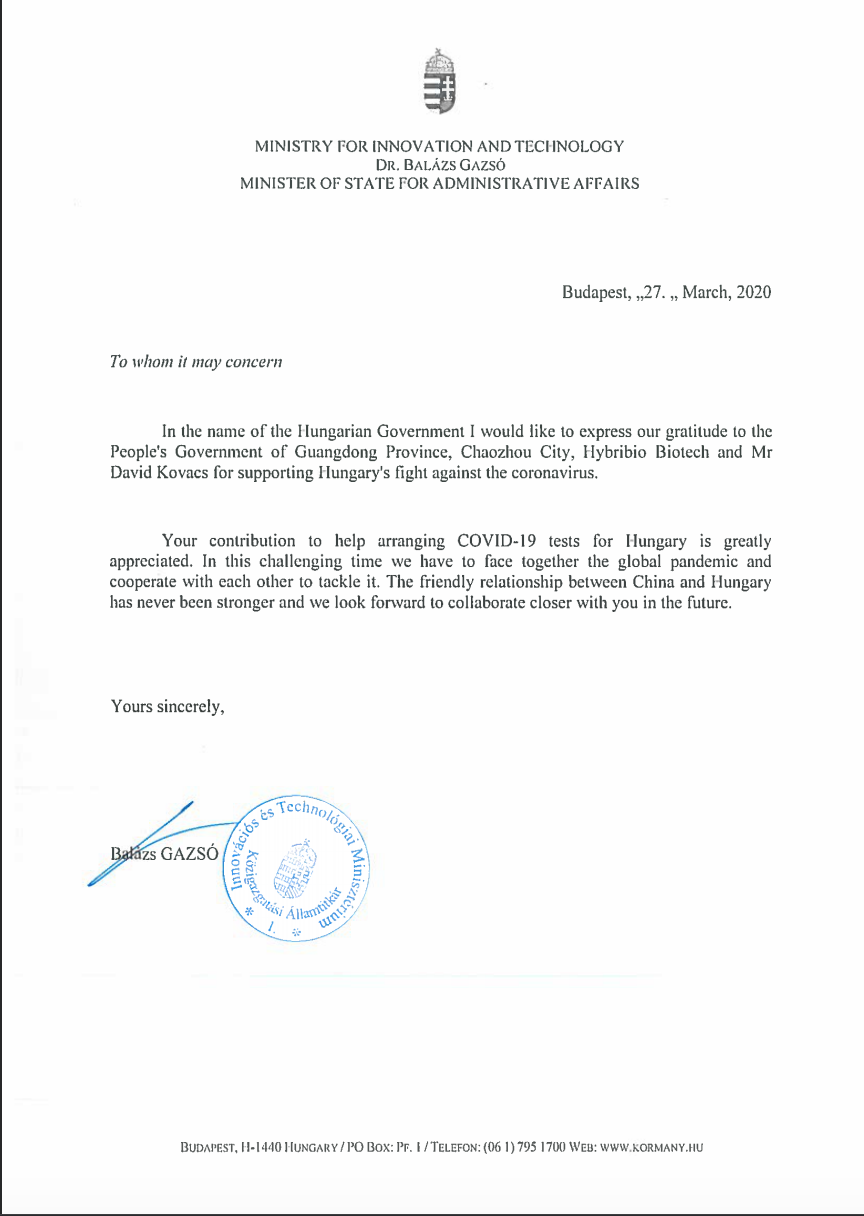 The Hungarian state secretary expressed his gratitude, among others, to the Chinese manufacturer of the tests, a company called Hybribio Biotech. Just four days later, however, China has tightened its export rules, suspending the company’s exports in April.

The name Hybribio did not appear on either of those lists at the time of their publication, (but was included in the second list on May 3.) Two other manufacturers of the rapid test currently used by Hungarian paramedics (Anhui Deep Blue Medical Technology and Hangzhou Clongene Biotech) are not on the NMPA list and they do not sell their products on the Chinese domestic market. Although they have a CE certificate that allows them to import to the European Union, according to a study published at the end of April, the two companies’ rapid tests are “not suitable for screening SARS-CoV-2 virus infection in the general population.”

Hungary had already stocked up on tests

Since the coronavirus appeared in the country, Hungary has imported more than one million tests and contracted for nearly two million more, Minister of Foreign Affairs and Trade Péter Szijjártó said in the parliament at the end of April. According to Szijjártó, tests are carried out in accordance with the regulations of the World Health Organization. Over 80 thousand tests have been performed in public care, and, in May, Hungary started testing a representative sample of almost 18,000 people across the country. Health professionals working alongside the government also support mass testing.

However, neither the government’s coronavirus task force, nor the Ministry of Foreign Affairs and Trade have revealed the name of manufacturers that delivered tests to Hungary. The name of some of the vendors have appeared in articles, photos and videos.

One of the manufacturers, Hybribio Biotech announced in early April on its own website that is had delivered tests to Hungary. Judging from the photos taken of the delivery, the tests arrived in Hungary on the basis of a public procurement carried out in March, according to a contract between Semmelweis University and Kromat Kft. The Hungarian company was contracted to deliver 30,000 coronavirus tests for 702 thousand euros (240 million forints) (Kromat Kft. did not reply to our inquiry about the tests).

The name of the other Chinese companies (Anhui Deep Blue Medical Technology and Hangzhou Clongene Biotech), which produce testing kits that are currently used by Hungarian paramedics for testing at home, were first published on the website of the Hungarian National Ambulance Service.

Recently, Hungarian website 444.hu revealed that the references of Anhui Deep Blue Medical were misleading and did not prove the accuracy of its products. The company’s tests were found “useless” in a Texan city and were withdrawn from the market.

Another rapid test used by paramedics, “Clungene”, is distributed in Hungary by Happy Business Services Zrt. (HBS) (the company’s legal predecessors, including Novotrade, were importing medical devices since the 1990s). According to the HBS website, the Chinese company has already sent several shipments to Hungary of the tests. A significant portion of these tests were purchased by the National Healthcare Service Center, but tests were also delivered to several universities and private hospitals.

“By the beginning of April, HBS had delivered about 125,000 Clungene rapid tests to Hungary, of which 20,000 were delivered for Semmelweis University,” said Gábor Rényi, Chairman of the Board of HBS.

“Hangzhou Clongene Biotech Ltd. has been manufacturing immunological tests since 2004 and exporting its products to many countries around the world, including the United States and Europe. Its products have the necessary licenses in all the export markets,” said Rényi, adding that, similar to other manufacturers, Clongene’s export license was suspended on April 1. However, the company got back its license on April 26, and shipments could be restarted: HSB is currently waiting for the arrival of “hundreds of thousands” of tests.

We have to be cunning

“The goods are indeed of very different qualities,” Cecília Müller, Hungary’s chief medical officer also complained at a press conference at the end of March when asked about tests and protective equipment shipped to Europe from China. Deliveries to Hungary are screened, according to Müller, as it is important that we can “trust” the protective equipment.

We asked the task force about the exact number of tests delivered to Hungary by the manufacturer whose license was suspended in April and whether these tests were eventually used. We also wanted to know which companies had agreed to procure the tests since the Chinese rules were tightened, but we did not receive any replies from the authorities.

At the end of April, when receiving new Chinese shipments, Deputy Minister of Foreign Affairs and Trade Levente Magyar spoke about the fact that there is still a “bloody competition” for medical devices.

“Those who have more muscle start with an advantage, we have to be more cunning and resourceful,” said Magyar at the airport, where he received a shipment of Chinese medical devices, including 25,000 coronavirus tests. The video posted about the event suggests that the Hungarian government managed to find a new test supplier: boxes marked with the name of “Maccura” were unloaded from the plane. This test manufacturer appears both on the NMPA lists and the list of companies with foreign authorization.

Coronavirus
More in this project 
Direkt36.hu uses cookies, by clicking ‘Got it’ you accept this procedure.
If you need more information on cookies we use, how you can delete or block them, please, see our Privacy Policy.
Got it