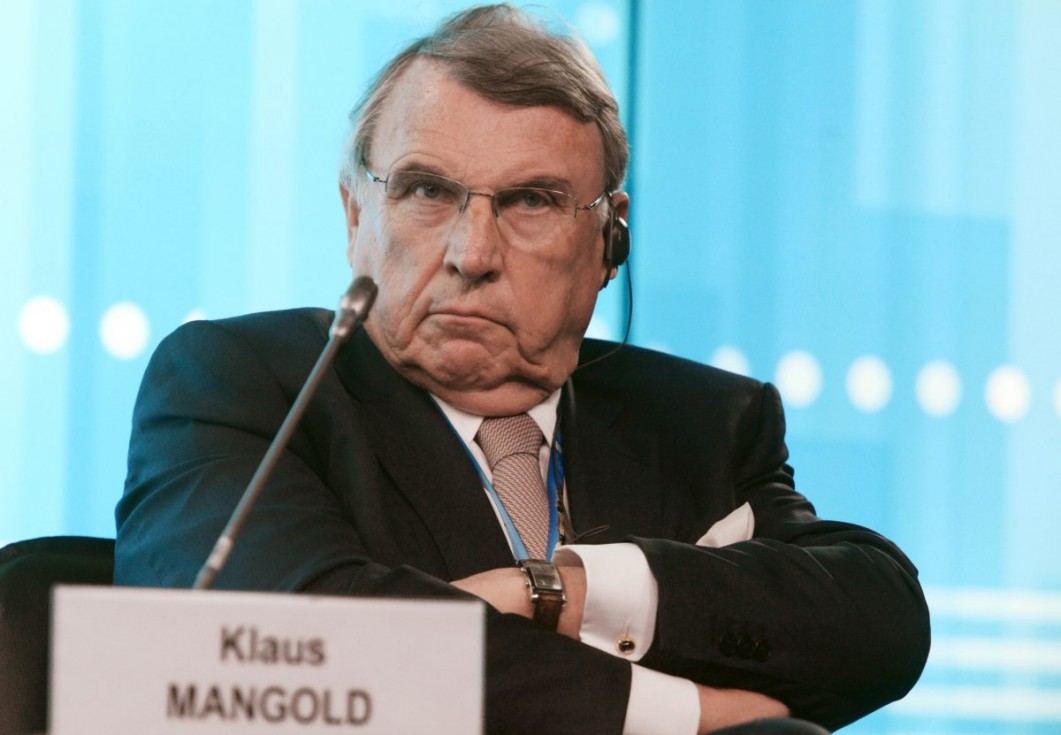 Even though the German carmaker Audi has been making hundreds of million euros in profit in its factory in Győr, Hungary, Prime Minister Viktor Orbán still felt it was important to offer financial assistance to the company due to the economic impact of COVID-19 during his mid-June visit. Orbán stressed that the German-owned factory is the stronghold and pride of the Hungarian industrial sector.

This person is Klaus Mangold, an influential German businessman who had previously helped the Hungarian government to smooth negotiations with Russia and the European Union over the construction of a new nuclear plant.

Details of Mangold’s new assignment are known from the consultancy contracts obtained by Direkt36. The contracts were signed in the past year and a half between the Hungarian government and Mangold Consulting, the company of the German businessman. Mangold has been selected for these tasks without tenders and the value of his seven contracts amounts to one million euros in total.

Mangold, known in the German press also as “Mr. Russia” for his extensive network in the Russian political and business elite, has been present in the highest business circles in Europe for decades. He has been advising the Hungarian government since 2013, with his initial focus having been mainly on Russian issues.

We sent questions to the contracting Ministry of Innovation and Technology about the German consultant’s activities, as well as to Klaus Mangold, but have not received any replies yet.

The 77-year old Mangold spent most of his career in the top management of various German corporations. In the early 1990s, he helmed the German mail-order company Quelle, and it was during that time that he met future Russian President Vladimir with whom he has maintained relations.

Between 1995 and 2003, he held executive-level positions in the German carmaker Daimler. Later, he became member of the boards of several major German and French companies and through providing consultancy services, he has put together numerous deals between Russian and European economic and political representatives.

Mangold’s first closer contact with the Hungarian government dates back to 2012, when former minister and his hunting partner János Lázár introduced him to Prime Minister Viktor Orbán. Shortly after that, as reported in an earlier Direkt36 article, Mangold had played a role behind the scenes in smoothing the preparations of the Russian-Hungarian negotiations over the Paks nuclear power plant expansion. He was also involved in making the project acceptable for the EU and Western business circles.

His name became known in Hungary when online news outlet 444.hu reported in 2016 that former European Commissioner Günther Oettinger from Germany traveled to Budapest by Mangold’s private plane. The trip raised several questions, including who paid for the trip, as commissioners are only allowed to accept gifts in small amounts.

The Hungarian government initially withheld information on what issues Mangold was working and also on how much he got paid for his consultancy services. Certain details were revealed when the Prime Minister’s Office disclosed four contracts with Mangold’s companies in 2017 that amounted to 650 thousand euros in total for the period between July 2017 and May 2018. According to the contracts, Mangold was helping the Hungarian government in EU budgetary issues, energy policy, digitalization, and promotion of electric cars.

Following the 2018 parliamentary elections, Mangold moved to the newly-set-up Ministry of Innovation and Technology, led by László Palkovics whose portfolio includes industrial and energy issues.

This May, the government published a list with the ministry’s current contracts, which included also the Mangold Consulting company. Direkt36 filed a FOIA request for the documents and obtained seven contracts from the ministry signed with this company, amounting to the total value of one million euros.

The first contract was signed five months after PM Orbán’s meeting with German Chancellor Angela Merkel in Berlin in July 2018. Even though the press conference following the meeting became memorable for Merkel mispronouncing the name of Lake Balaton, this was also where Orbán announced that the two countries would deepen cooperation in innovation and technology. The two parties agreed to establish a working group in order to achieve this goal. Shortly after that, the Ministry of Innovation and Technology signed a contract with Mangold Consulting that tasked Mangold with facilitating the activities of the working group, by preparing background analyses and calculations about the German-Hungarian economic cooperation, “with special regards to the Hungarian presence of the German industry.”

German industry was also in the focus of another contract signed in March 2019. It was related to the European Council’s approval of stricter CO2 emission rules for personal cars and small trucks. The task of Mangold’s company was to evaluate the impact of stricter regulations on the German and Hungarian economic growth, “with special regards to the Hungarian presence of German carmaker companies (Audi, Mercedes, BMW).”

The Hungarian government provided various incentives in the past years to attract foreign companies, mainly German carmakers, to Hungary. It seems that it also counts on the counseling of Mangold’s companies in this regard. This February, the ministry signed a contract which tasks them with maintaining contact with car industry leaders to make Hungary look investment-friendly and attractive for an increasing number of companies.

Increasing investments in Hungary is also in the focus of another contract from February. Mangold’s company should assist in seeking foreign technology investors, mainly in healthcare, waste management, and infrastructural development projects. The government counts on German investors, since the document states that the ministry is striving for closer relations with German market players in technology. Mangold Consulting should “assist Hungarian representatives” in the organizations of their German travels, and the establishment of contacts with German industrial leaders and politicians interested in Hungary.

The businessman’s company was selected for these tasks without tenders. According to the ministry’s justification, legal provisions allow the ministry to refrain from tenders in consultancy services related to its fundamental activities. Mangold’s fees are subject to submitting monthly written reports. Each contract contains an anti-corruption statement that Mangold Consulting cannot violate Hungarian anti-corruption rules, among others it cannot offer any material or financial benefits to ministry officials.