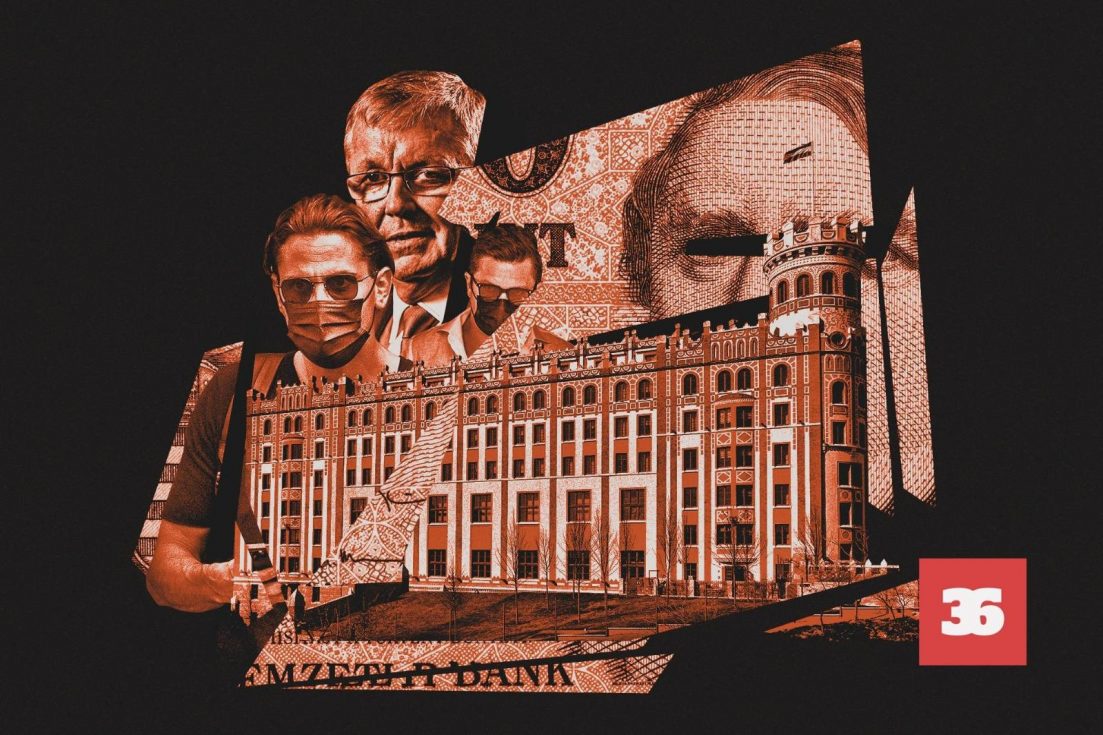 The subsidiary of the Hungarian National Bank (MNB) has signed a contract with Raw Development for more than 32 billion Hungarian forints for the second phase of the renovation of Postapalota, a landmark building on Széll Kálmán Square in Budapest,. The contracts are not public and the MNB subsidiary does not show them to the bank’s supervisory board.

However an investigation document reveals some important details of the investment: according to this, the cost of the project has increased by almost 70% compared to the original budget. The cost of the investment exceeded the budget by 13 billion Hungarian forints, and no economic calculations and impact assessments were carried out. MNB let the project’s costs slip despite the fact that the huge amount of money spent on the construction is public, as are all the assets managed by MNB’s companies and foundations.

The details of the recently completed renovation of Postapalota can be read in the inspection report published in December 2021, which was prepared by László Nyikos, a Jobbik delegate in the supervisory board of MNB, to present the inspection of the experts he had invited.

The construction audit report states that without knowing the contracts, it is not possible to assess the transparency and accountability of the use of public money and assets in the project. However, MNB-Ingatlan, the company that commissioned the construction, did not even disclose these contracts to the supervisory board of its owner, the Hungarian National Bank, because they were not created within the bank’s organisational framework, and therefore were not internal documents of MNB. The company had also previously requested the National Security Committee of the Parliament to exempt the entire second phase of the project from public procurement, which the Committee agreed to.

In response to Direkt36’s questions, MNB-Ingatlan denied the claim of the study report that no economic calculations and impact assessments had been carried out for the second phase of the investment. In their reply, they said that the documentation included a preliminary cost estimate and an economic impact assessment, which the company did not send to Direkt36 at its request, arguing that they are not public.

Raw Development Ltd. is the interest of Bálint Somlai, who owes much of his business rise to orders from MNB. Somlai is also a friend of Ádám Matolcsy, son of the central bank president György Matolcsy. Their relationship was recently described in a detailed article in Direkt36.

It has become 70% more expensive

The Hungarian National Bank announced in the summer of 2018 that it will take ownership of the former Postapalota. The iconic building, located at one of Buda’s busiest intersections, Széll Kálmán Square, was originally built for the Royal Hungarian Post Office in the 1920s and was used by the post office until the early 2000s. The structure, which stood empty for years afterwards, was restored by its new owner, the Trustee of the Central Bank Foundations, at a cost of more than 7 billion Hungarian forints in 2019. The property was then managed by MNB-Ingatlan Ltd, which was authorised by MNB’s board of directors in April 2020 to contract to the second phase of the project.

This is clear from the audit reports on the Postapalota project issued by the supervisory board of the Hungarian National Bank. The investigation was carried out by experts appointed by the committee, and the reports were prepared by László Nyikos, a member delegated by Jobbik, who also led the investigations. The supervisory board of the central bank continuously monitors the bank’s operations under the 2013 MNB law. It sends an annual report on its own activities to the Parliament and may request information from the bank’s senior officials with a 5 working day deadline for reply.

The company Raw Development has been commissioned to complete the renovation and transformation of Postapalota. MNB-Ingatlan, which manages the building and commissioned the renovation, told Direkt36 that Raw Development was selected in an invitation/negotiation procedure from three valid bids, and it submitted the lowest offer. Due to confidentiality rules between the parties, MNB-Ingatlan did not answer other questions regarding the tender.

The company that founded Raw was previously owned by Tamás Szemerey, the cousin of György Matolcsy, president of the National Bank. The current owner (through a company) is Bálint Somlai, who has close business and personal ties to the Matolcsy family. Somlai is a friend of György Matolcsy’s son, Ádám Matolcsy, and Raw Development is the company that, among other things, will renovate the MNB’s Szabadság Square headquarters for 55 billion Hungarian forints by 2024. The rise of Bálint Somlai and Ádám Matolcsy, their state connections and the special high-value sports cars they use were previously covered in detail by Direkt36.

Raw was commissioned by the MNB-Ingatlan to construct the Postapalota and to build the gateway connecting Széll Kálmán Square with Csaba Street.The central bank’s company did not have enough capital to finance the entire project, so its owner, MNB increased the company’s share capital by nearly 20 billion forints. To cover the construction costs of the money museum and visitor centre, which will be housed in the property, the company raised the capital by another 12.7 billion forints just six months after the previous one. According to the report of the supervisory board, Raw Development was also the best bidder for this project.  The total amount covered by the contracts concluded with the company, i.e. the capital increase for this purpose, is reaching 32,2 billion forints.

The study document sets out both positive and negative aspects of the investment. It stresses that MNB has saved the historic building of Postapalota by acquiring the property, that the second phase of the project was legal and regular, and that the architectural solutions were of high quality. However, it also points out that based on the preparatory expert materials, the board of directors had estimated the cost of the second phase of the project at between 16 and 19.5 billion forints, but the actual amount was 13 billion higher, although the preliminary budget did not include the Csaba Street gateway, the money museum and the “exclusive area” on the top floor. The report also notes in its summary findings that

“There is a significant discrepancy between the planned and actual costs of the investment.”

and that, although the investment is considered to be effective, ‘it does not meet the criteria of economy’ because ‘no economic calculations, impact studies, etc. were carried out’.

The company denied the latter allegation to Direkt36, and claimed that the documentation submitted to the MNB’s board included a preliminary cost estimate and an economic impact assessment. As they said, the content of the report is the competence of the report’s author. They also said that the committee was not dealing with them, but with MNB, which was under its control. The documents were not released by the company, even after Direkt36’s request, claiming that they were not public.

The Matolcsy-company’s truck and national security

The report prepared for the supervisory board reveals that no public procurement was announced for the project, so the project is not even in the public procurement database. In September 2020, MNB provided some details to HVG when the newspaper asked the central bank about one of the sub-projects, the Csaba Street crossing. It revealed that Raw Development was also awarded the approximately 1 billion sub-project, and the subcontractor was Market Építő Plc., an interest of István Garancsi, a friend of the prime minister.

In the spring of 2021, the son of the central bank president, Ádám Matolcsy himself, spoke out about another part of the property’s transformation. Népszava asked Matolcsy about the project because, according to the newspaper, one of the trucks transporting furniture to the Széll Kálmán Square construction site had the name of one of Matolcsy’s companies, Balaton Bútor Ltd., on one of the photos in its possession.

“Balaton Bútor Ltd will not participate in any public procurement where the tenderer is MNB or any of its subsidiaries.”

This was stated by the son of the central bank president, who did not deny that his company’s furniture was used in Postapalota, owned by a subsidiary of MNB. According to Népszava, all this was possible because the predecessor of MNB-Ingatlan Ltd. had previously been classified by the Public Procurement Arbitration Commission as a state-owned company not subject to the Public Procurement Act.

In a reply sent to TI, the Public Procurement Authority revealed that the purchaser, MNB-Ingatlan, was exempted from the public procurement obligation by a decision of the competent committee of the Parliament, based on a paragraph of the Public Procurement Act. The law allows for the exemption from the public procurement rules of investments related to the country’s essential security, national security interests, the protection of classified data and special security measures.

According to a source with insight into the project’s exemption procedure, Direkt36 understands that MNB-Ingatlan applied for exemption for the entire second phase of the project, and that the justification for their request was the important IT systems that will be installed in the building. The committee supported the request. This was confirmed by the member of the supervisory board of the central bank, László Nyikos. In its reply to Direkt36, MNB-Ingatlan added that the protection of MNB’s buildings and systems, and the stability of the financial intermediation system is a fundamental national security interest. According to the company, the exemption would have been pointless if it had been requested only for certain parts of the project, as allowing more contractors onto the construction site would have increased the risk to national security.

In response to a question from Direkt36, Ádám Matolcsy confirmed that Balaton Bútor participated in the furnishing of Postapalota. As he said, his company won about 5% of the furniture order from a subcontractor of the project in a price competition. About his relationship with Bálint Somlai, Matolcsy said that they had a mutual circle of friends. Somlai did not respond to Direkt36’s request for comment.

Not outward, not inward

The tender for the second phase of the MNB Surveillance Centre and the Museum of Finance is not listed in the public procurement register, neither in detail nor in full, and the contracts are not publicly available. However, the investigation report also shows that certain documents were not shared by MNB-Ingatlan not only with the public but also with the supervisory board. According to the investigation report, the lack of knowledge of relevant information, such as the contracts, hampers the assessment of the extent to which the investment complied with internationally accepted criteria for transparency and accountability of public assets and the use of public funds.

In this regard, the report also includes a footnote on the MNB management’s position as a justification for withholding the documents. They argue that all information within the scope of the supervisory board’s powers has been shared with it and that all legitimate requests for information have been complied with. According to the management, only material that is not part of the MNB’s internal documents, such as material that is not part of the submission, has not been sent to the sb. They also point out that the autonomous decision-making power for the subsidiary administration is granted by the memorandum of association itself.

According to the investigation report, the cost of the first phase of the MNB Surveillance Centre and Money Museum investment, the acquisition of the company was 14.78 billion Hungarian forints. Together with the second phase, the capital increase of more than 32 billion for the Raw contracts and the purchase of two monumental sculptures by Gábor Miklós Szőke, the Aranyvonat and the Csodaszarvas, the total cost of the project, excluding additional works, exceeds 47 billion forints.

Downtown billions
More in this project 
Direkt36.hu uses cookies, by clicking ‘Got it’ you accept this procedure.
If you need more information on cookies we use, how you can delete or block them, please, see our Privacy Policy.
Got it