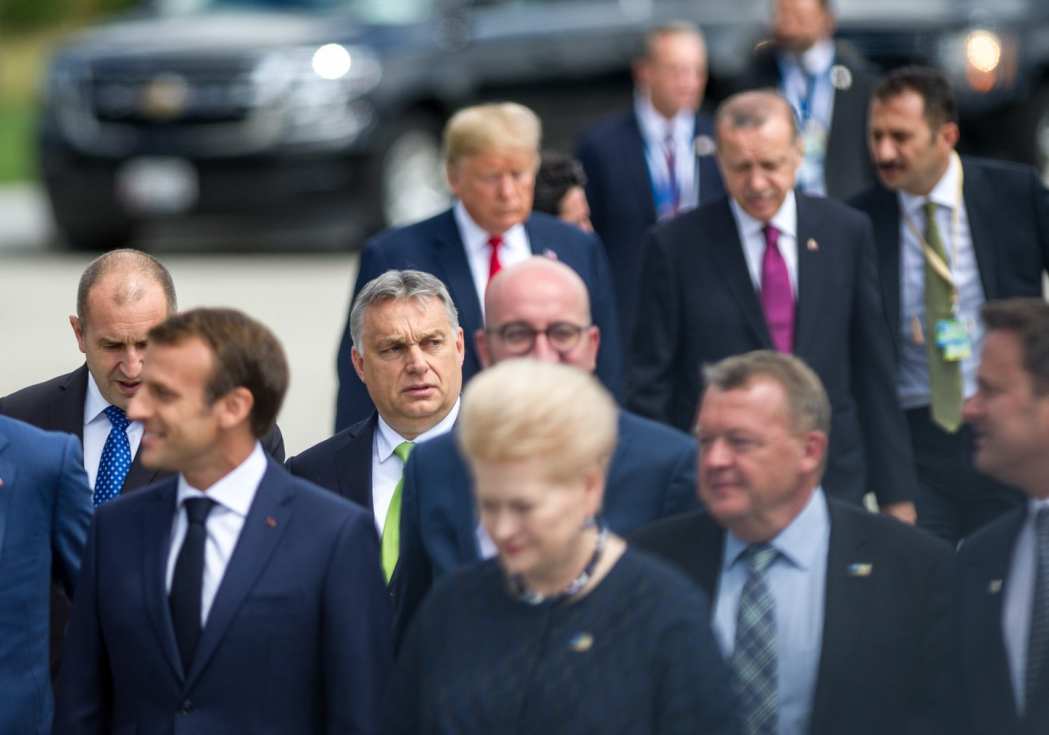 Panyi Szabolcs 2019.05.12. 3 Comments
Have a good story? Contact us!
In collaboration with

The meeting of Prime Minister Viktor Orban and President Donald Trump in the White House on May 13 will not only be a breakthrough in U.S.-Hungarian relations, but it could also bring significant changes to Hungary’s military. In recent months, the two countries have been negotiating high-value arms deals worth billion dollars as well as joint energy projects, some of which may become public after Monday’s meeting.

A few weeks ago, U.S. Ambassador to Budapest David Cornstein revealed some details of these deals while briefing a group of Republican staffers from Congress who were visiting Hungary. Direkt36 managed to confirm the content of that conversation by multiple sources.

The ambassador claimed that Hungary would soon be able to significantly reduce its dependence on Russian gas imports. According to Cornstein, negotiations are advancing well on Hungary buying gas from ExxonMobil’s Romanian offshore gas fields as well as American liquified natural gas from the sea terminal on the Croatian island of Krk. According to Direkt36’s sources, Cornstein also boasted that they will announce a billion-dollar arms deal between Hungary and Lockheed Martin, and that there is a second billion-dollar deal in the making with another company. Although the ambassador did not name that other company, he was referring to a Raytheon deal, according to two sources with knowledge of U.S.-Hungarian defense procurement talks.

Agreements on gas and arms deals would also be a turning point in U.S.-Hungarian cooperation. According to a leaked diplomatic cable published by Direkt36 earlier, Hungarian Deputy Minister of Foreign Affairs Levente Magyar had to face criticism in Washington DC last year because of the Hungarian government’s lack of commitment to buying American gas. Hungary’s position has since apparently changed and the value of arms deals has risen considerably too.

Cornstein not only talked about upcoming business deals to the group of Republican staffers, he also shared his personal views with them. He explained, among other things, that as a Jew he sees no anti-Semitism in Hungary. His relationship with Orban is very good. He listed positive results during his own term as ambassador, which he thought fit to the Trump administration’s pragmatic, transactional approach. According to Cornstein, Orban “has the government, the parliament and the judges in his grip”, but “he is a great guy”, who is “not so much a prime minister but a statesman”.

A U.S. Embassy spokesperson responded to our questions about Cornstein’s remarks that “the embassy does not generally comment on internal deliberative discussions regarding issues of bilateral interest, and is unable to do so in this case”. The Hungarian Ministry of Foreign Affairs and Trade did not react to our inquiry.

The Raytheon deal was first reported by Direkt36 in the days before U.S. Secretary of State Mike Pompeo’s visit to Budapest in February. Hungary is buying the American-Norwegian NASAMS medium range air-defense system, manufactured by Raytheon and Norwegian defense company Kongsberg Gruppen. Direkt36 has since talked with multiple sources who follow how the negotiations are unfolding. According to them, Hungary and the U.S. have agreed to cut the deal, and the required Congressional notification process is already underway. However, the agreement has not yet been finalized. According to both Hungarian and U.S. government sources, a conflict between Hungary and Norway is halting the deal (Norway is involved as majority shareholder of Kongsberg, the other manufacturer besides Raytheon of the NASAMS air-defense system). To solve the debate, Hungary’s government requested the U.S. to intervene.

The reason for the conflict, according to a diplomatic source, is that the Hungarian government ties the air-defense system deal to the ongoing debate over the Norway Grant Funds, which practically means the financial support that Norway gives to Hungarian civil society. The European Economic Area (EEA) and Norway Grants Fund would provide €214.6 million ($241 million) to Hungary for the period 2014-2021, but 10 percent of the money would be distributed to Hungarian NGOs through an independent fund operator of Norway’s choice. However, Hungary’s government is opposed to this and wants to have a say in how the total amount of the Norwegian contribution is spent, including that 10 percent aimed at strengthening civil society. A Hungarian government official confirmed to Direkt36 that this is indeed an issue halting the arms deal but did not elaborate further. We asked the Norwegian Embassy in Budapest for comment on Friday afternoon but have not received a response yet.

Hungarian government politicians regularly claim that they consider NGOs funded from abroad as their real opponents instead of the political parties of the Hungarian opposition. This is why several government campaigns have been launched in recent years not only against civil society organizations receiving support from the foundation of George Soros, but against NGOs receiving Norway Grant money as well. In 2014, for example, Hungarian police raided and searched offices of two Norway Grant organizations in Budapest. Later, courts ruled that the raids against the headquarters of the Hungarian Environmental Partnership Organization (Ökotárs) and their partners were illegal.

The roughly $1 billion value of the Raytheon deal – the value was first reported by Nepszava and since confirmed by multiple sources to Direkt36 – raises further questions. The purchase of the NASAMS air defense system, which was revealed in February, in itself could only cost a couple of hundred million dollars. The much bigger size of the deal could suggest the acquisition of other high-value arms produced by Raytheon.

However, the other $1 billion deal with Lockheed Martin, which was also revealed by Cornstein, is still in its initial phase, according to Direkt36’s information. Since the company’s main products are fighter jets and Hungary’s leasing contract for 14 Swedish Gripens (JAS 39) used by the Hungarian Air Force will expire in less than 10 years, the business is logically either about buying the latest variant of the F-16 or the fifth-generation jet fighter F-35. “The Swedes were digging their own grave with their many anti-Hungarian attacks. It is conceivable that we are buying F-35s instead,” a senior Hungarian government official told Direkt36 referring to the Gripens and the frequent criticism coming from the Swedish government regarding the state of rule of law and human rights in Hungary.

However, many sources were skeptical about a F-35 deal. One of them claimed that the F-35s are way too advanced for the needs of the Hungarian army, which is tasked with protecting the airspace and air policing but does not perform offensive operations. According to a Hungarian defense expert, the acquisition of F-35s would be a “tragic decision for taxpayers. This is the typical case of a BMW 6 parking in front of a run-down Socialist block of flats”. A country with similar needs, Slovakia is buying 14 pieces of F-16Vs, the advanced variant of the F-16 which is much cheaper than the F-35.

According to the defense expert, an F-35 deal could fail because of the American side as the U.S. could be reluctant to supply Hungary’s China- and Russia-friendly government with the most advanced fighter jet technology. However, according to the opinion of another source, the Hungarian government is floating the possibility of a lucrative F-35 deal only as bait for U.S. diplomacy.

Hungary tries to befriend China and the U.S. at the same time

Although the American side generally considered U.S. Secretary of State Mike Pompeo’s visit to Budapest in February and the following months a success, the issue of China remained a major concern, according to our sources who follow U.S.-Hungarian relations closely. Pompeo’s Central European trip was focused on trying to persuade governments of the region to curb Russian and Chinese influence. However, according to the American assessment, Hungary’s government is visibly opposed to their efforts to limit the regional presence of China and its tech giant, Huawei. Hungarian Foreign Minister Peter Szijjarto recently said in Beijing that “it is in Hungary’s national economic and strategic interests to continue its excellent cooperation” with Huawei.

According to sources who were briefed on the preparations of the Trump-Orban meeting, while the topic of the Central European University is not on the U.S. agenda at all anymore, the issue of Huawei will certainly be a priority. President Trump’s national security adviser John Bolton will also attend the Orban meeting, and the official statement of the White House said that cyber security and national security issues will be discussed too. From the U.S. side, the National Security Council (NSC) and Deputy Assistant Secretary Robert Strayer (in charge of cyber security at State Department) is communicating with the Hungarian government and is trying to pressure them on the Huawei issue.

Direkt36 asked Strayer during a telephonic press briefing if the U.S. government is concerned with Hungary’s relationship to China and Huawei, and also about the incentives the U.S. can offer to Hungary in order to change the Orban government’s position. In his reply, Strayer talked about future dangers, saying that they are having discussions with their partners “about the national security implications, and indeed the economic implications over the long run because a foreign power’s control over the network could affect dramatically our economic futures”.

Citing examples, Strayer said that a foreign power’s control can result in disrupting critical infrastructure, theft of intellectual property, or the derivation of private data, and that these could fundamentally affect our economies. He also pointed out that the United Kingdom “just found hundreds of vulnerabilities” in Huawei’s software. “We’re asking countries to think carefully about the overall economic proposition that they’re being offered by Chinese companies relative to their long-term economic futures,” he added. According to Strayer, choosing Huawei would over the long term be potentially more costly than other alternative vendors that come from Finland, Sweden or South Korea (Nokia, Ericsson and Samsung), and he stressed that countries should carefully consider the life cycle costs of those vendors.

Meanwhile, the anti-Huawei offensive of the United States faces opposition in many places in Europe. Hungarian government officials told Direkt36 that the U.S. cannot offer a realistic alternative to Huawei nor can it provide evidence to support their claim that there is a concrete security threat as they always speaks of potential future threats. “I see two foreign policy directions that are important to us: China and the United States,” a senior Hungarian government official told Direkt36. According to the senior official, the government believes that they should maintain good relations with both economic powers at the same time and that any U.S.-Chinese rivalry can only hurt Europe.