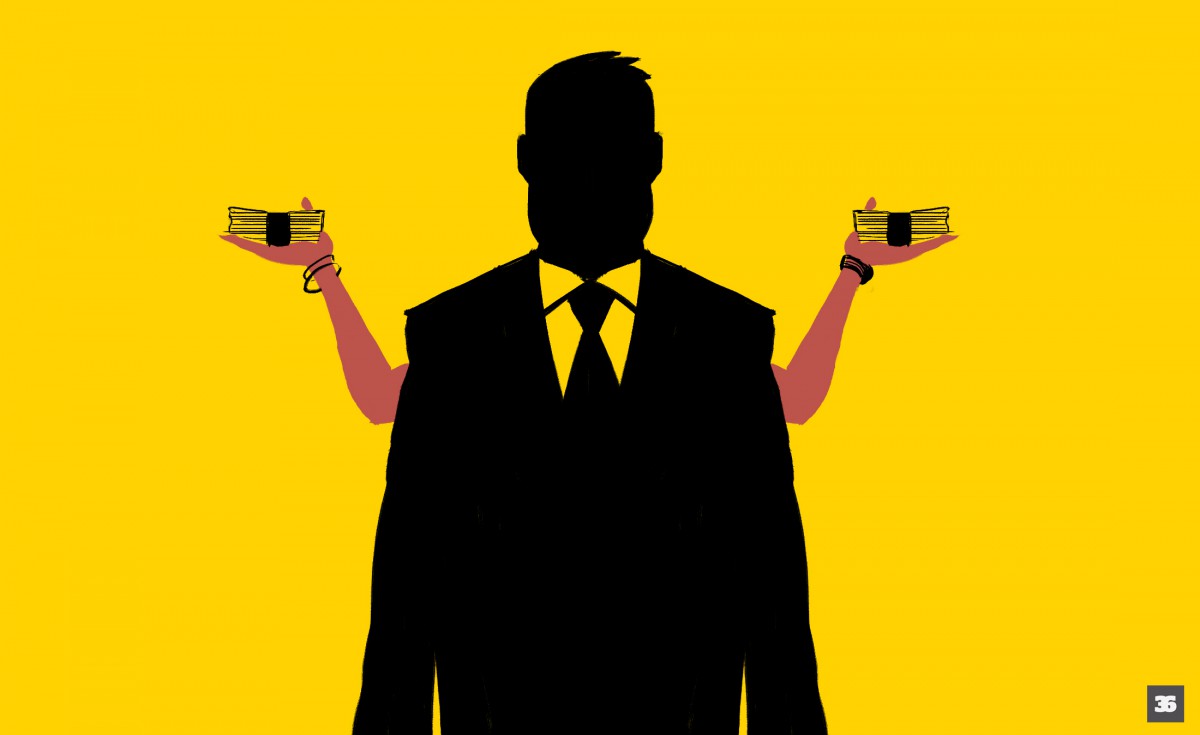 In 2012, a secondary school teacher in a rural town of Hungary acquired an offshore company registered in Samoa. With the firm came along a bank account in one of the most prestigious Swiss private banks. And on the day when she acquired the company, measures have been taken in order that the company could get back an outstanding debt of 255 thousand euros.

These kinds of business activities are unusual amongst the employees of the Hungarian public education system. She is, however, not a simple teacher. Through her husband, László Boldvai, she is connected to highest circles of politics in Hungary. Boldvai is a politician, former treasurer and MP of the Hungarian Socialist Party (MSZP).

Information on Konti’s offshore interests was found by Direkt36 in the millions of documents that leaked from a Panama based offshore provider, Mossack Fonseca. The “Panama papers” were obtained by Süddeutsche Zeitung, a German newspaper, and were processed by an unprecedented cooperation of journalists. The efforts of nearly 380 journalists from 76 countries were coordinated by the International Consortium of Investigative Journalists (ICIJ). As a part of the team, Direkt36 also found the offshore company of Zsolt Horváth, a former MP of Fidesz, the current ruling party in Hungary.

While Konti owned the offshore company, her husband was still a representative in the parliament. Even though he was not re-elected to the national assembly in 2014, Boldvai is still active in politics. He is a representative in the Nógrád county assembly and acts as the leader of the local MSZP branch. He was the treasurer of MSZP in the mid-90s, a task that has always been considered a financially important position within the party. Boldvai became relatively well-known in connection with the greatest corruption scandal of the 90s, the so called Tocsik-case. He was even charged with blackmailing, but he was acquitted and his political career continued seamlessly.

Still, from time to time, Boldvai has been heavily criticized because of his wealth, especially in his home town, Salgótarján, where he built a huge house and where his wife allegedly drives around in expensive cars. Currently, she is driving a luxury SUV and Direkt36 discovered several other controversial details about the wealth accumulation of the Boldvais.

Two weeks ago, we called Boldvai to ask him about his wife’s foreign business activity. First he asked back “Does she have such a thing?” Then he stated he doesn’t know about any foreign company owned by his wife. When we told him we found a company in Samoa on her wife’s name he replied “then she must have such a company.” He refused to answer any further questions, but gave us his e-mail address. We sent an e-mail with a long list of questions to him and his wife but they have not replied to date.

Among other things, we asked whether Konti complied with the law and reported any income coming from her offshore business to the Hungarian tax authorities. We also asked if Konti had any other income besides her job as a high school teacher. We also asked if Konti reported her Samoa company in the declarations that the MPs’ spouses need to file. These declarations are not accessible to the public. Boldvai did not answer these questions either.

From Samoa through Switzerland to Hungary

Konti became the owner of the company registered in Samoa in 2012. The company, Tanka Ltd., had been operating in the previous four years as well, but its owner had been unknown. Until Konti’s appearance the company had so called bearer shares, which means that whoever possessed the shares also owned the company.

The leaked documents also revealed that the company had a bank account in Switzerland and that a Swiss consulting company, Sieber Consulting was acting on its behalf.

In 2008, Tanka Ltd. acquired ownership in a Hungarian company, C.I.P. II Befektetési Ltd. C.I.P. II is no longer operational but at that time its main official activity was buying and selling real estate owned by the company. The minority owner and the manager of the company was a man named Balázs Veres. We visited him at his address. He told us through the intercom to send our questions in e-mail, which we did, but he has not responded to them.

C.I.P II was liquidated in April 2012 but its owner, Tanka, continued to operate. In November that year, Konti appeared on the register of shareholder of Tanka Ltd. According to the leaked documents, Sieber Consulting, a Swiss consulting company remained with Tanka, and acted in the name of Konti after she had become the owner.

The Panama Papers do not contain information on the business performance of Tanka Ltd but there are some hints about the financial dealings of the company.

High quality services come at a price at Vontobel. A Hungarian fund manager told us that the fees at banks like Vontobel are the double of the private bank fees in Hungary. While Hungarian private banks require around 160-320 thousand euros as a minimum amount to open a bank account, Swiss private banks ask for double or triple of this. However, customers usually have much larger amounts on their accounts, said the manager of a Hungarian private banking service.

Bank Vontobel declined to disclose their minimum amount policy, and by referring to Swiss laws it refused to answer our questions concerning Tanka Ltd.

Boldvai did not answer our questions about the Swiss bank account and Tanka Ltd’s financial transactions either. However, registry court documents revealed that the company had transactions worth hundreds of thousands of euros during its existence. Tanka agreed to pay 151 thousand euros for the shares of C.I.P II Ltd. According to Hungarian registry court documents, Tanka later injected more than 488 thousand euros into C.I.P. II, partly as a shareholder loan, and partly as additional capital contribution. This latter is necessary, for example, when a company is making loss and runs out of its original capital.

C.I.P. II folded in April 2012. Liquidation documents show that Tanka became eligible to a 254 thousand euros repayment from the money it had lent to C.I.P. On November 21 2012, Tanka asked to transfer half of the money in USD and other half in euro to two separate foreign currency bank accounts at Vontobel Bank. The exact same day Konti became the owner of Tanka Ltd..

Documents of the financial transaction do not specify whether the two bank accounts belonged to Tanka. From the Panama papers it is clear that Tanka was still the customer of Vontobel at the time of the transaction.

Tanka most likely also folded. In May 2013, Sieber Consulting told the law firm, which registered Tanka, that their customer would like to terminate the business. It is not clear if the termination took place indeed because neither Boldvai nor Sieber Consulting answered our questions.

From the broker scandal to the villa in Salgótarján

This is not the first time when the Boldvais’ finances make headlines. In 2003, Index.hu reported that Boldvai’s wife was the customer of K&H Equities, a brokerage firm embroiled then in a large embezzlement case. Boldvai confirmed Index’s information but emphasized that his wife was not a VIP customer and did not even have her account with the main character of the scandal, Attila Kulcsár.

A few years later, Boldvai’s family appeared in the news again, this time because of the huge mansion they built in Salgótarján, their hometown in North-Eastern Hungary. Boldvai reported the house first in his 2008 wealth declaration. According to the document, the 1050 square meter house was built on a 3000 square meter plot. Newspaper articles at the time questioned whether Boldvai could afford to build and maintain such an enormous house.

Consequently, questions about Boldvai’s financial situation landed in front of the parliament’s immunity committee. The president of the committee – also a politician of the socialist party – decided, however, not to launch a wealth examination procedure.  He said that Boldvai’s previous wealth declarations and further information provided by him revealed that he had enough sources to build such a house from selling real estate, his savings and a loan.

Boldvai virtually never had any other job than being a politician, and in the past two decades his main income was his salary as an MP. Before the regime change he was a trader at the Salgótarján Metallurgic Works, and between 1999 and 2001 he was the manager of an Austrian tech company’s Hungarian subsidiary, states Boldvai in his CV.

Parliamentary representatives had to file wealth declarations for the first time in 1997. In that document, Boldvai’s only asset was a 50 percent ownership in a house in Salgótarján. His 1998 wealth declaration was the same but according to his next one from 2001 his wealth situation hugely improved in merely three years. He kept the Salgótarján real estate, and acquired half of a 1800 square meter parcel in Szentendre – an elegant town near Budapest -, a BMW car and 106 thousand euros in savings.

There was a similar wealth growth between 2004 and 2005 as well. During the year Boldvai’s only income was his salary from the parliament, around 36 800 euros before taxes. Nevertheless, he bought another BMW (he sold the previous one in 2002) and saved 18 200 euros. The car’s production year and exact type was not included in his wealth disclosure.

In 2006, his only income was once again his salary, but he managed to buy a 3000 square meter parcel in Salgótarján with his wife, and saved 16 thousand euros. He didn’t sell any of his previously acquired assets.

Two years later the 1050 square meter villa of the Boldvais was completed. As Boldvai explained to his fellow party member heading the immunity committee, he financed the construction by selling their previous house, the parcel in Szentendre and by borrowing 64 thousand euros from a private person. He didn’t pay back a single euro from this loan until his parliamentary career ended in 2014.

Driving a BMW to the local school

Even though the outrage stirred by the luxury house calmed down after a while, the scandal left a mark on Boldvai’s popularity in the town. “Salgótarján is a really leftist city with a lot of underclass people,” told a former local political ally of Boldvai to Direkt36. It did not help his image that his wife was seen driving expensive cars. “Not a lot of teachers drive a black BMW to school,” said the former ally.

Boldvai didn’t answer our questions concerning his wife’s car and wealth. Even though he lives in a huge house and has a luxury car, Boldvai tries to project the image of someone who feels the problems of the poor. In 2013, he participated in the “Hunger March”, where the protesters demanded from the government to raise the salary of public workers from 156 euros to 192.