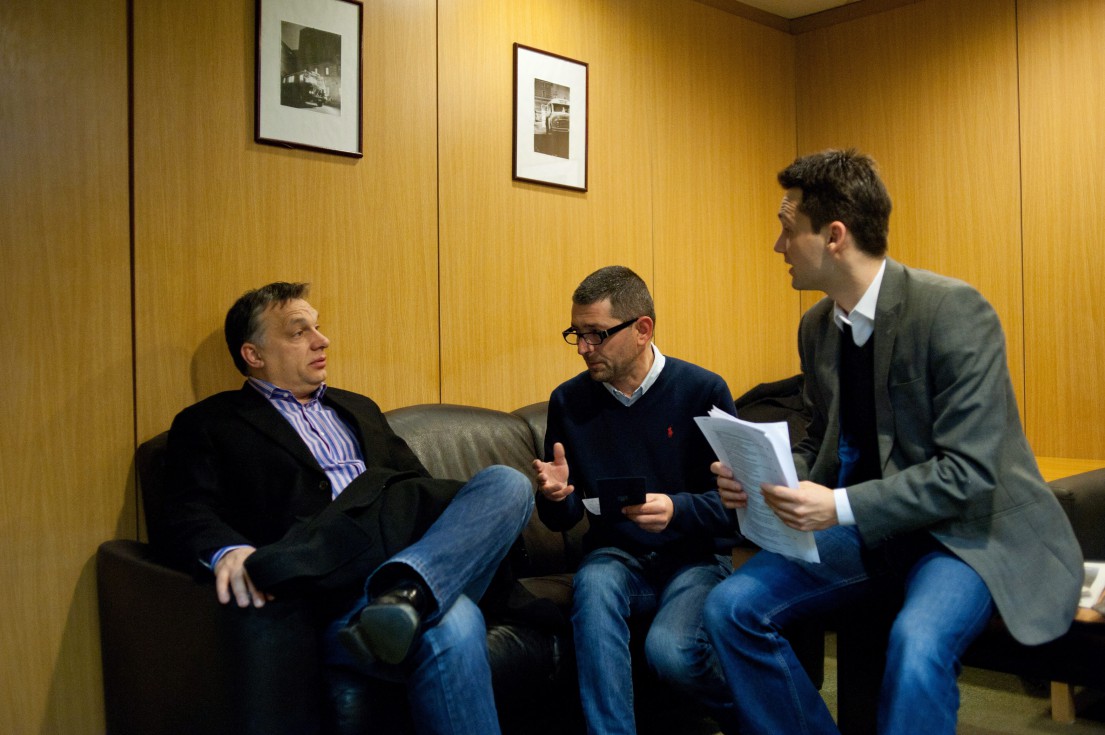 Csonka Anna, Sáling Gergő 2016.03.24.
Have a good story? Contact us!
In collaboration with

In 2014, Új Média és Teletext Ltd., a state company belonging to the public media, bought 110 domains and websites for 386 thousand euros. The seller was a company closely connected to a once powerful politician of the ruling party, Fidesz, Attila Várhegyi, who has still ties to the party.

Domains and websites similar to those bought by Új Média és Teletext Ltd. could have been acquired for much less than the price Új Média és Teletext Ltd. paid for them. The domains are very similar: most of them is a combination of a Hungarian town’s name and the word “news”. Not only the names of websites are very similar, but they also look the same and display the same content: news copied from the Hungarian News Agency or the public media’s main news site, Hirado.hu. The only apparent difference is the name in the banner on the top of the sites.

The domains and websites were sold by Magyar Híradó Ltd., a company closely connected to Attila Várhegyi, an important figure in the circles of Fidesz. This deal was a huge business for Magyar Híradó Ltd, which had a seventeen times higher profit in the year of the deal than in the previous years. Várhegyi and other companies connected to him received several other contracts from the public media besides the domain deal.

What did exactly cost 386 thousand euros?

In the package of 110 domains there was a news site for virtually every big and mid-sized Hungarian town. Besides the domains, Új Média és Teletext Ltd. also bought the websites, the content management and the administrative systems connected to the websites.

Új Média és Teletext Ltd. likes to call these websites local news sites, however, there are hardly any local news on the nearly identical sites. Take for example the site for the second largest Hungarian town, Debrecen. The “local news” on Debrecenhirado.hu are all copied from the Hungarian News Agency’s general newsfeed, while – according to the source code of the site – the “current news” are automatically refreshed from the newsfeed of Hirado.hu and Profit7.hu, two public media news sites. This is how a few of these sites looked like the day before our article was published: “We started to set up the workflow of local news sites’ editorial room parallel to restructuring the broadcast and new media division of the public media”, responded Új Média és Teletext Ltd. to our question why and when the local news sites chain started to operate.

Új Média és Teletext Ltd. claims that they have been spending the almost two years since the start of the local news sites with in-depth market research to assess user needs. That is why currently all the websites display the same content.

Interestingly, measuring user statistics is not part of the in-depth market research. Citing cost-effectiveness, Új Média és Teletext Ltd. said they did not include the local news site in the company’s media audit plan. However, the sites’ source code reveals that they are connected to Google Analytics, a free tool to measure user statistics. The current traffic of the sites does not reach the minimal threshold of publicly available online analytics services, like Alexa or TrafficEstimate, thus they cannot provide an estimate.

The specific costs associated with the domains, websites and content management system were not disclosed by Új Média, and they are not specified in the contract either. But if the company had decided to register similar, not yet reserved domains instead of buying reserved ones it would have cost much less.

According to the Hungarian domain registry’s database, the domain provider of the local news sites is GTS Datanet. This provider sells domains for a 12 euros one-time registration fee, plus a 6 euros yearly fee (Új Média és Teletext Ltd., as the owner of the domains has to pay this yearly fee anyway). If Új Média és Teletext Ltd. had decided for example to start Debrecen’s news site under the domain debrecenihirado.hu instead of debrecenhirado.hu, and had done the same with the other over 100 domains, it would have cost less than a thousand euro.

Judging by their source code, the sites are powered by a custom-developed content management system (CMS). Új Média és Teletext Ltd. did not tell us who developed the system, and Magyar Híradó Ltd refused to talk to Direkt36. However, there are cheap solutions for such a system. Sites a lot more complicated than these local news sites run on free CMSs, like WordPress. In fact, the public media’s very own news site, Hirado.hu uses WordPress.

Financial statistics of Magyar Híradó also show that selling the domains and the associated websites was an exceptionally good deal for them. According to an explanatory annex submitted with the accounts of the company, the domains and websites were worth around 13,700 euros at the end of 2013. Although it is possible that Magyar Híradó made some major developments on the websites before selling them in May 2014, there is no evidence for this in the books.

The winners of the deal

Magyar Híradó Ltd was founded in 2012 by Zoltán Veres and Myself Consulting Ltd, which is managed by Várhegyi and currently owned by his family. For Magyar Híradó, the domain deal was a big win: in the previous two years, they had 8,900 euros and 20,178 euros profit respectively, and in the year of domain contract their profit skyrocketed to over 349 thousand euros. This profit landed at Várhegyi’s family business. Magyar Híradó kept the money in retained profit, and a few months after the domain deal the company merged with Myself Consulting. It was a good deal for the latter company, which gained 322 thousand euros with the merge.

Várhegyi started his fast and successful career in the current ruling party, Fidesz, right before the regime change, in 1989. By the 2000s his career reached as high as state secretary, but before that he was also the party director, chairman of the national board, and mayor of Szolnok.

His political career suffered a blow when he was sentenced to suspended prison in an embezzlement case. According to the verdict, Várhegyi, as the mayor of Szolnok, undersold real estate to Fidesz-leaning businessmen. This caused a 627 thousand euros damage to the city of Szolnok, according to the court. He was also accused of illegally funding his re-election campaign in Szolnok in 1994, but in this respect he was acquitted in court.

After the verdict, Várhegyi gradually retired from the public scene. However, he remained influential in the background. His companies received several commissions from local governments and state companies, and in a 2013 photo he appeared together with Prime Minister Orbán Viktor before one of his radio speeches.

When Fidesz came into power in 2010, the business relationship between Várhegyi’s interests and the public media became tighter. Besides Magyar Híradó Ltd, Várhegyi’s family business, Myself Consulting, and another Várhegyi-led company, Prestige Média Ltd also signed several contracts with public media companies. Várhegyi was also personally commissioned as a consultant and project leader, according to a database of the public media.

When Új Média and Teletext Ltd. decided to buy the domains and websites in question, Várhegyi was working as a consultant to the CEO of the main public media company, who is exercising the ownership rights over Új Média és Teletext Ltd. He was also responsible for a project about local news development.

Since 2012, various public media companies signed ten contracts with companies in Várhegyi’s interest. Several of them are overlapping: