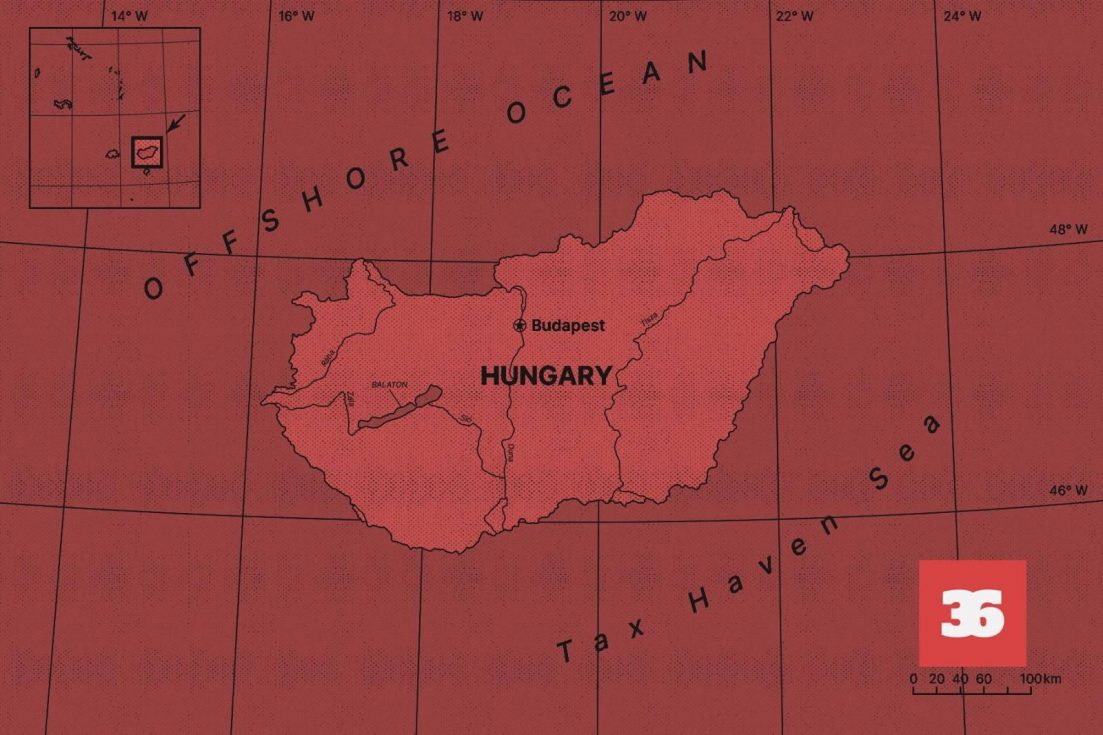 „As I found there is an antipathy in several countries against companies registered in classical offshore jurisdiction and in several cases there is a suspicion in the course of tax audits,” wrote the Kovács V. Gábor Law Firm, adding that there might be a solution for the problem.

Essentially, the law firm suggested that by using companies registered in Hungary the suspicion around offshore structures could be dispelled. If, for example, a Seychelles-based company establishes a Hungarian limited liability company and operates through it, that could give a “tax efficient onshore face for offshore structures,” as the law firm put it in one of its brochures.

The law firm also noted that the tax environment in Hungary is favorable because “the 2010 corporate tax law changes put Hungary on the map of international tax planning.” According to the law firm, “companies registered in Hungary could be perfect for this purpose”, as the country’s corporate tax is low and several types of taxes – that are present in other European countries – are non-existent in Hungary.

In recent years, numerous articles have been published about the fact that the tax changes introduced by the Orbán government after 2010 have made Hungary a much more favorable place for foreign companies in terms of taxation. For this reason, Hungary has been criticized in recent years, saying that Hungary helps international companies avoid taxes.

Help us tell the truth in Hungary! Become a member now!

Now, a new gigantic offshore leak known as the Pandora Papers show that the word has spread even in the offshore world about Hungary’s favorable tax environment. The International Consortium of Investigative Journalists obtained the trove of 11.9 million confidential files from 14 offshore service providers that deal with the registration and managing of offshore companies. A team of more than 600 journalists from 150 news outlets, including Direkt36, the only Hungarian partner in the investigation. We have already revealed the offshore secrets of Hungarian businessmen close to the government.

“Hungary as a tax haven”

The leaked documents included the brochures from Gábor V. Kovács Law Office, but other documents also emphasize the favorable tax environment in Hungary. In 2011, the magazine of Cititurst, another offshore provider with headquarters in Belize, published an article entitled “Hungary as a tax haven” written by a Hungarian financial expert, Tamás Danku.

Although Danku begins his article by saying that the “tax haven status mentioned in the title is very much an exaggeration,” he later explains that a Hungarian company could become the means of efficient tax planning and – mainly as a result of changing taxation rules in 2010 – “Hungary can become the alternative of Cyprus or Malta,” referring to two European countries that have been a popular location for international companies seeking to minimize their taxes. According to Danku, one of Hungary’s big advantages is that it has a better reputation and that the country “is free from the offshore or low-tax stigma.”

Offshore countries and territories usually have two important characteristics. Companies registered in these jurisdictions can help minimizing the tax burden on income that a company or a person makes in other countries. Besides, since the ownership data of these entities are in most cases very hard to access, these companies are also used for hiding assets or conducting shady businesses. It is because of these two characteristics that – even though owning or using offshore companies is legal – many consider the offshore operations harmful.

Although financial experts told Direkt36 that it is indeed true that, in the past ten years, Hungary has become a more favorable location for international businesses that wish to minimize their taxes, but this does not mean that Hungary is a classic offshore jurusdiction. Some taxes may be low here, but business owners cannot remain hidden. While in classic offshore areas, such as the Seychelles or certain territories in the Caribbean, it is almost impossible to find out who owns a company, in Hungary, in most cases, companies’ ownership data is publicly available.

In addition, strict rules regulate the operation of Hungarian companies. They must have a registered office, make their documents available to Hungarian tax authorities, and it is recommended to employ a local manager to deal with the company’s affairs or at least someone who visits Hungary regularly. Hiring such executives is costly, although as one of the leaked documents shows, there are also cheaper – but legally dubious – solutions.

Leaked documents from an offshore provider contains a letter from a Hungarian lawyer, which suggests that, if a homeless person is appointed as a director, it is cheap, but it can be a problem “if you can’t find him when something should be signed.” The lawyer also wrote that, in this case, they cannot provide a notarized signature either, because for this the company manager would have to appear in front of a notary. The lawyer added that “in exceptional cases” it might be possible, but they have not tried this yet and it “possibly costs much more than USD 100.000, also penalized with 3+ years in prison,” the leaked document shows.

One of the most tempting opportunities for foreigners in Hungary is that the country does not apply so-called withholding tax. This is a tax that has to be paid in many countries when a company or individual wants to take their income abroad. In this case, the state “withholds” a certain amount.

This type of tax is so widespread that, according to the head of a Hungarian tax consulting company, when foreign clients contact them, one of their first questions usually concerns how the “withholding tax” is calculated in Hungary. “Then we proudly to tell them that we do not have a withholding tax,” said the CEO who asked not to be named.

It is also considered favorable that Hungary has agreements with many countries to avoid double taxation: countries agree where and how taxpayers pay public charges, to make sure that people and companies do not pay tax twice on the same income. For example, if a company pays corporate tax in one country, the other country that has signed the agreement can no longer claim it or that amount must be included in the company’s tax there. Hungary already had about 60 such agreements in 2010, which has increased even more since then, to over 80.

The Orbán government, which came to power in 2010 – in addition to concluding double taxation agreements and eliminating the withholding tax – added another important element to the structure: corporate tax was significantly reduced. First, the tax rate was reduced to 10 percent only for companies with an annual income of less than 500 million forints (1.4 million euros). In 2017, the tax rate was further reduced to 9 percent, regardless of the company’s turnover. Currently, Hungary has the lowest corporate tax rate in the entire European Union.

The combination of these has already made Hungary an attractive tax planning destination. As described by Gábor V. Kovács Law Firm in the brochures sent to Alpha Consulting, if someone enters the market with a classic offshore company and wants to sell products or services, it raises suspicion in many parts of the world. However, if, for example, a Seychelles company establishes a Hungarian limited liability company and carries out its activities through it, it will seem less suspicious. “The profits of the Hungarian trading Llc. can be transferred as dividend to any owner without withholding taxes. The member can be a company registered in an offshore jurisdiction, this does not affect the fact that Hungary doesn’t apply withholding tax on transferred dividend,” the law firm wrote, also emphasizing the low level of corporate tax in Hungary.

Tamás Danku, who is the manager Airon consulting company, told Direkt36 that although such solutions may have worked in the past, they are not really possible today. “Mainly because they make it harder for companies to open bank accounts,” Danku explained. He said that Hungarian banks are less and less willing to open a bank account for foreign-owned companies, and companies cannot operate in Hungary without a bank account.

At the same time, Danku added that despite such difficulties, there is a lot of interest in Hungary, especially from Eastern countries such as India or Pakistan. “In terms of taxation, Hungary is pretty relaxed,” the financial expert said, meaning that it is easy to set up structures with a low tax burden, and it can be done in a legal way, “so you don’t have to do any clever tricks.”

Where tax morale is bad

There is no indication that the Orbán government shaped the tax environment specifically for offshore companies. According to tax advisers interviewed by Direkt36, on the one hand, it is simply a matter of trying to attract foreign investors, such as large car factories or shared service centers. On the other hand, the Orbán government also made a philosophical decision by lowering income taxes (personal income tax, corporate tax) while raising taxes on commercial activities (VAT).

“They teach that the worse the tax morale is and the less people want to pay taxes, the more a country will switch to VAT type of taxes instead of income taxes,” explained a tax adviser, saying that while taxpayers might try to avoid paying income tax, they cannot do the same with VAT as it is included in the price of goods and services.

At the same time, this change of direction also brought international criticism to the Hungarian government. According to the 2021 list of the Tax Justice Network, which fights against tax avoidance, Hungary is the twenty-fourth most damaging place in terms of helping multinational companies pay as little tax as possible.

However, it does not seem that the Hungarian government would like to change direction. Hungary, for example, has become one of the loudest critics of the global minimum tax called for, among others, by US President Joe Biden, which would aim to reduce tax avoidance techniques available for multinational companies. As this proposed rate of this minimum tax is 15 percent, higher than the current 9 percent in Hungary, its introduction would adversely affect Hungary.

The idea was criticized by Orbán personally. At an event in June, he said that this was decided by “the big dogs of the world” who don’t want competition among countries in terms of in taxation. He added, however, that he thinks it will take a lot of time for this idea to be carried out in practice and “we will win several elections until then.”

Offshore secrets
More in this project 
Direkt36.hu uses cookies, by clicking ‘Got it’ you accept this procedure.
If you need more information on cookies we use, how you can delete or block them, please, see our Privacy Policy.
Got it