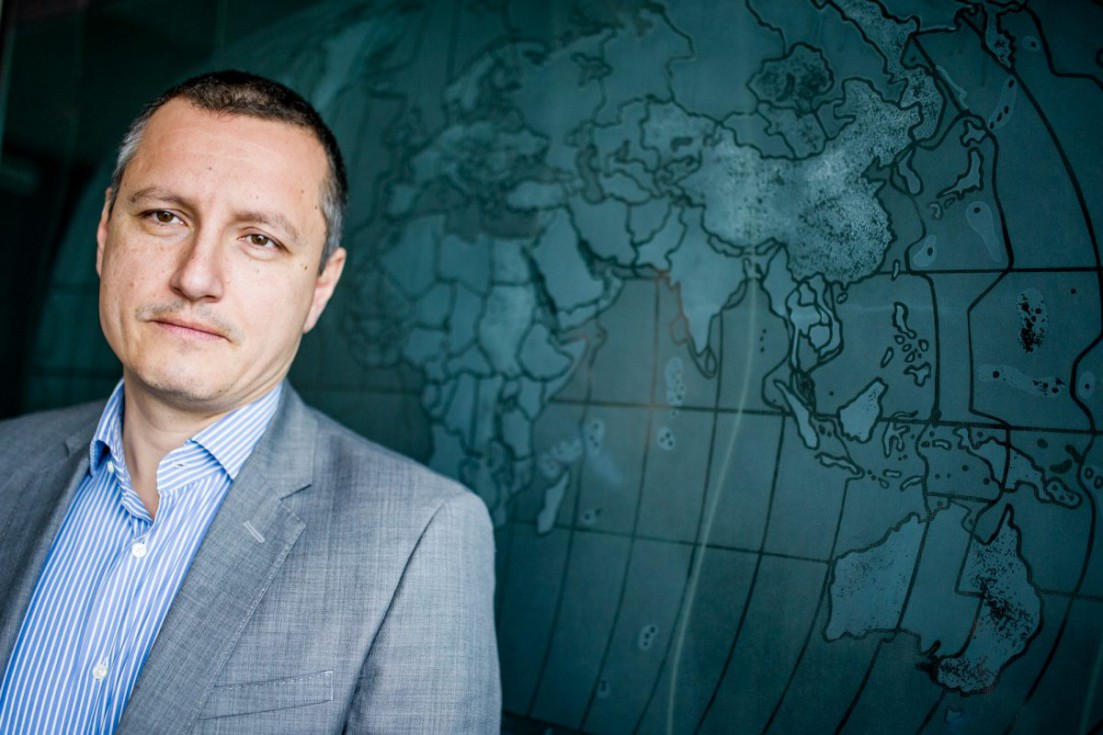 The autumn of 2014 was a tough period for Péter Heim, a then-influential Hungarian businessman with close ties to Viktor Orbán‘s government.

Back then multiple articles stated, though lacking evidence, that Heim was among those Hungarian businessmen who were banned from entering the United States due to their alleged corrupt activities. At the same time, Heim gave up his ownership in Századvég Gazdaságkutató Zrt., a consultancy firm close to the government, despite its lucrative public contracts. And as Direkt36 has revealed, in that autumn Heim was deprived of a high value state business under controversial circumstances.

This business was related to the Jeremie venture capital programme, which is largely financed by the European Union. Heim was among those influential Hungarian businessmen who managed the Jeremie funds. However, based on a massive cache of internal documents obtained by Forbes’ Hungarian edition and analyzed by Direkt36, the government terminated the contract with Heim’s fund management company referring to “serious infringements.”

This was an unusual measure. To our knowledge, Heim’s company was one of the two funds dismissed by the state, although the EU had previously found multiple irregularities with other funds as well. Moreover, three months before the termination of their contract, the Hungarian Development Bank (MFB), which supervises the Jeremie programme, did not have any problems with those investment ideas that they eventually referred to when   terminating the contract.

Heim stated to Direkt36 that there is no such connection and he thinks that his investments were ethical and in accordance with the rules. The Hungarian state bank, MFB, and the Ministry of National Economy, which oversees the Jeremie programme, did not reply to our questions.

Close to the government

The 47-year-old Péter Heim is an economist by degree and started his career in the private sector. In 2010, he established the consultancy firm Századvég Gazdaságkutató Zrt. together with András Giró-Szász who later became a spokesman of the Orbán-government. Századvég Gazdaságkutató has been providing studies and analyses for ministries and other state institutions. It has received high value procurements since Viktor Orbán’s Fidesz party came into power in 2010. Its revenue reached 1 billion forints (3 million euros) last year.

During the previous Orbán-government between 2010 and 2014, Heim regularly gave interviews about economic policy and, despite his firm’s closeness to the government, Heim criticized the cabinet at certain times. Although Heim started to focus on his Asian businesses from 2011, he remained active in Hungary as well, and his fund management company was authorized to receive Jeremie funds in 2013.

The European Union launched this venture capital programme to support new and innovative start-ups. A subsidy totaling 130 billion forints (422 million euros) is allocated to 28 fund managements companies operated by private investors who had been selected in a public procurement procedure. While 70% of the investment given to start-ups comes from the EU, the remaining 30% has to be provided by the private investor. Heim’s fund management company, Hemisphere, received 3 billion forints (10 million euros) from the EU.

In August 2014, Hemisphere decided to invest in four companies. Based on the documents leaked to Forbes magazine, representatives of the supervising state-run bank, MFB, criticized certain elements of the planned investments during the decision-making process, but eventually they found all the investments in accordance with the criteria. Accordingly, a month later Hemisphere asked MFB to send them 815 million forints (2.7 million euros) for the investments.

However, something happened in the meantime. MFB did not send the requested amount, so Hemisphere wrote again to the bank on 15 October. Hemisphere urged MFB to transfer the money immediately referring to the ongoing investments.

The attitude of MFB changed entirely. According to the leaked documents, in the beginning of October, MFB hired an external consultancy firm to conduct due diligence on Hemisphere.

The inquiry took a few weeks, but it did not go smoothly as Hemisphere refused to collaborate on several issues. Heim’s company refused to share some investments’ term sheets, the documents indicating the main numbers of the projects. Hemisphere also declined to share those documents that detailed the reasons why the company supported certain investments. Heim did not reply to Direkt36’s question on why they did not collaborate with the advisory firm.

Heim wrote to Direkt36 that “according to their best knowledge,” it was Hemisphere that terminated the contract first. The sealed and officially signed documents obtained by Direkt36 show that this was not the case. Hemisphere indeed took steps to terminate the contract, but it happened two days after MFB’s decision, the records showed.

The US travel ban

At the time of the conflict over the EU funds, the news broke that the United States banned Hungarian businessmen and state officials from entering the US due to suspected corruption.

The travel ban was unveiled in mid-October 2016, after Napi Gazdaság, a newspaper owned by Századvég Gazdaságkutató, reported that the Hungarian tax-authority launched an investigation into multiple American companies and institutions. In response, the Embassy of United States in Hungary released a statement, confuting the alleged investigation into American interests. However, the statement added that certain Hungarian citizens were banned from entering the country due to their corrupt behavior.

The embassy did not disclose their names but in the following days, multiple newspapers claimed, without providing evidence, that Péter Heim was among the banned businessmen. A few days later Heim stated to Index, a Hungarian news site, that he was not in touch with American companies and his main businesses took place in Asia.

Heim now told Direkt36 that he has never been banned from entering the US. He also said that he does not think there is any relation between what happened with Hemisphere and the issue of the US travel ban.

In the notice letter sent by MFB to Hemisphere, the state bank brought up unusual arguments. They labelled projects illegal which were endorsed by them three months before. MFB’s two main reasons behind the termination were both investments whose details were known by MFB in August 2014, when Hemisphere decided to invest in these projects. Heim confirmed to Direkt36 that MFB had not objected to these investments previously.

The first argument of MFB was that two investments were interrelated based on their company profiles and ownerships, thus these investments can be seen as one project. The first one was a Romanian company, Glodeni Energy Srl., which planned to build a solar park next to Glodeni, a town in Romania. The other company was Renewable Energy Investments Zrt., which builds and optimizes solar projects.

MFB must have had known about the interrelation in August 2014 when the bank approved it. It was written down in documents supporting the decision that Renewable Energy was planned to take part in the implementation of the Glodeni project and a person called Miklós Cherestes had ownership in both companies.

Cherestes told Direkt36 that he first met Heim in 2010 when he was looking for investors for solar projects. They started to work together on various projects. Cherestes said that they wanted Renewable Energy to build the Glodeni solar park in order to save money on implementation.

MFB’s second main argument was that Glodeni would have built the solar park outside of Hungary. This, however, had also been known by MFB months before they raised concerns about it with Hemisphere.

Cherestes did not know that MFB criticized the location of his project. “Everyone should have known about the location since its beginning, as the project itself is named after a settlement in Transylvania,” said Cherestes.

MFB’s argument is surprising, as the foreign location of projects did not spark criticism in the case of other funds. For example, the fund of István Garancsi, a friend of Prime Minister Viktor Orbán, supported a project in Germany with 300 million forints (1 million euro) in capital and loan. A fund of Gubicza Ágoston, a businessman with family ties with Antal Rogán, the head of government communication, supported a company with 570 million forints (1.9 million euros), which organized Harry Potter and Star Wars exhibitions in Western European cities.

What the MFB did not object to was the controversial practice, known at other Jeremie funds as well, to provide investments for the fund managers’ acquaintances. Zoltán Tóth, a co-owner of Renewable Energy, the solar firm the Hemisphere planned to support, was a business partner of Heim. Both held shares in Get-Energy Magyarország, an energy company. Hemisphere also planned to support the business interests of István Herdon, a Hungarian entrepreneur who also had ownership in Get-Energy Magyarország.

We asked Heim why he invested in his acquaintances’ companies, but he did not respond to this question. He wrote in general that these investment ideas could not be unethical and malicious because 30 percent of the investments were provided by him, thus any unethical behavior would harm his own business.

After the notice in November 2014, MFB and Hemisphere entered months-long negotiations about the future of the fund. Eventually, it was renamed to ‘ABC fund management company‘ and continued the investments from the Jeremy funds. Its new owner is Péter Werner, a businessman with ties to András Giró-Szász, a business partner of Heim.

Since the Hemisphere affair, Heim has kept a low profile. He told Direkt36 that he did not shy away from the public, he has just been focusing on his foreign businesses since 2013. He said that he is still willing to share his opinion any time with the public if somebody is interested in it.

For company records we used the services of Opten.

Blackholes of EU funds
More in this project 
Direkt36.hu uses cookies, by clicking ‘Got it’ you accept this procedure.
If you need more information on cookies we use, how you can delete or block them, please, see our Privacy Policy.
Got it
