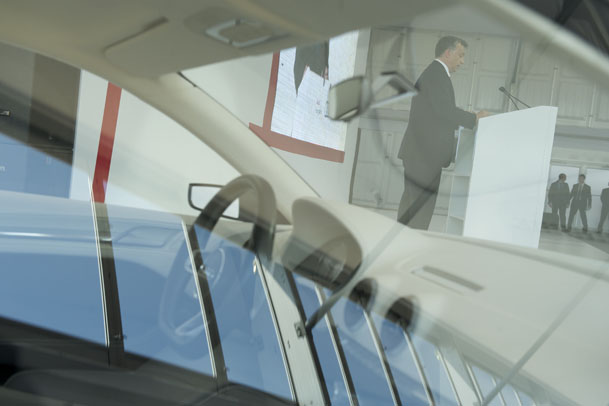 A Hungarian car rental company, which has been under Russian influence for a while, could receive another contract related to the construction of Hungary’s new nuclear plant, Direkt36 has learned.

As recently reported by Hungarian news site 24.hu, Mercarius, the car rental company, had already been contracted by the Hungarian state company responsible for the Paks nuclear power plant expansion. Now, Mercarius is in negotiations with the Russian state company Rosatom in charge of building the nuclear reactors for the project known as Paks 2, records show.

Mercarius came under Russian control last year as part of a loan deal. The company’s owners took a mortgage loan from the Russian state-owned Sberbank. As a result, the bank has been granted extensive insight into the company’s internal operations and contracts.

One of the owners of Mercarius can be connected to Russian business circles. László Szűcs previously held high-level positions in the MET group, a gas trading company that had Russian ties at the time.

Direkt36 asked Mercarius whether the contract has already been signed with the Russians. The company did not wish to provide answers, claiming that our questions concern confidential business issues and private data. Sberbank did not comment either, citing bank secrecy as a reason, nor did Rosatom respond to our inquiry.

According to a document published on the website of Rosatom at the beginning of August, the Russian company is pursuing so-called pre-contractual negotiations with the Hungarian company Mercarius. The contract would be in the value of 263,000 euros regarding “long-term lease of vehicles.” The Hungarian branch of Rosatom would use the 12-piece vehicle fleet for the period of three and a half years.

Mercarius was the only one that submitted a bid to the Russian tender published in May. The company’s quoted price equalled exactly the upper limit indicated by Rosatom. Generally, bidders go below the maximum price, but in the case of Mercarius this amount did not change even later, during negotiations prior to the contract signature.

Mercarius has been operating for more than 20 years, however its ownership gradually changed after 2010. SCF Partners Hungary, which deals among others with gas trading, got a 40 percent share in the car rental company in 2011, and by 2016 it became its sole owner. SCF Partners Hungary is owned by three private individuals, among them László Szűcs appears to have the most business experience. According to his LinkedIn profile he held leading positions in the gas trade MET company group.

This company was involved in the implementation of one of the most controversial state-linked business deals in recent years. Through a series of decisions, Hungarian state authorities have made it possible for MET to have a lucrative business opportunity as of 2011. Until 2017, MET had Russian shareholders alongside with Mol, Hungary’s oil company, and a businessman named István Garancsi, a friend of prime minister Viktor Orbán. Although the Russian state did not officially appear in MET, former government officials and energy industry experts insist Moscow was involved in the company’s controversial gas deals.

Mercarius began to win state tenders after 2015. Earlier this year it made headlines after winning the 2.5-million-euros tender of the Hungarian state-owned company in charge of building the new nuclear blocks for Paks 2. This was when Hungarian news site 24.hu reported that Mercarius got under Russian influence because of a registered mortgage. According to documents available in the company registry, the owners of the car rental firm signed a 1.46 million euros loan contract with Sberbank, and the bank selected its company share in the value of 4.6 million euros as a security for the loan.

According to the mortgage contract, the bank exercises control over Mercarius during the repayment period. The company must enable the bank to check its financial management including business books and accounting records, and Mercarius also has to send its financial reports in due time to the bank. The company could not even be sold without the bank’s permission. According to the document, in case the company is unable to pay, the bank could take possession of the company for sale purposes. In case of payment delays, the bank could also decide to claim ownership of the company.

Sberbank is one of the biggest Russian banks, its biggest shareholder is the Russian central bank. Recently, it started a serious financial expansion, which included the purchase of the Austrian Volksbank in 2012, together with its Hungarian network. This process was halted after the United States and the European Union introduced economic sanctions against Russia for the annexation of Crimea. The head of Sberbank, Herman Gref has been a close ally of Russian President Vladimir Putin since the 1990s.

This is not the first time that the Russians gained influence in a Hungarian company which could participate in works related to the Paks expansion. Direkt36 previously revealed how Rosatom forced out the Hungarian owner of the company called Ganz EEG producing nuclear power plant components.

Rosatom has been publishing Paks expansion tenders since the beginning of last year. According to our statistics, it has so far published almost 90 public tenders and announced results in 50 cases. One tender in the value of 70 thousand euros was won by a company owned by a lawyer who maintains friendly relations with the head of Hungarian OTP Bank Sándor Csányi. One of the most valuable tenders concerned the procurement of turbines, and the 793.8-million-euros work was granted to the Hungarian branch of General Electric. Currently, there are two, altogether 130.8 million euros tenders underway, where the bidders include Duna Aszfalt, the company of László Szijj, a businessman with links to Lőrinc Mészáros, the childhood friend of PM Orbán.