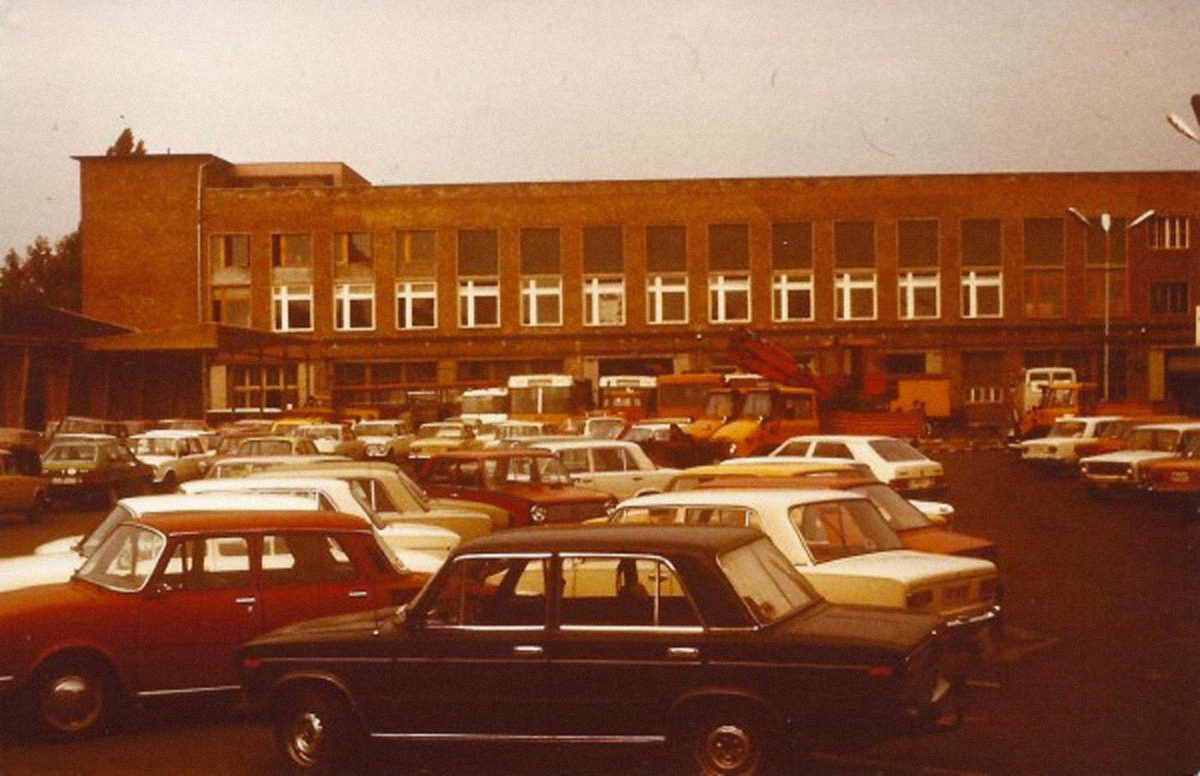 Pethő András, Zöldi Blanka 2015.03.31.
Have a good story? Contact us!
In collaboration with

In the 1970s-80s, one of the favourite service stations of car owners in Budapest was the Car Maintenance Industry Trust in Zugló (14th district). One of the regular customers of the garage, simply called “AFIT” by everyone, was a skinny and humble policeman. Former workers of the service station still remember when, often dressed elegantly in a suit, he drove his car into the backyard of the repair halls covered in the smell of oil.

This policeman was Sándor Pintér, today Hungary’s Minister of Interior. According to some ex-workers of the now defunct AFIT, he often chatted with the car mechanics and over the years he got to know many of them. One of these men was Béla Pittlik, a round-faced car mechanic, seven years Pinter’s junior.

Later, their paths crossed again and again. At the beginning of the 1990s, Pittlik and Pintér’s wife opened a car dealership that is still a joint operation in Vác, a town about 40 km north of Budapest. What is more, Pittlik has been working for three years for the Ministry of Interior, led by Sándor Pintér since 2010. Pittlik was appointed as an advisor and has received a gross total of HUF 11.2 million (EUR 37,000) since working for the ministry.

The ministry has not provided a meaningful response to the question of how Béla Pittlik was chosen for this job. They only said that the selection was based on “professional judgement” and that Pintér “did not take part in the selection procedure.”

The former car mechanic’s contract specifies his duties as “performing special advisory activities regarding technical, logistical problems connected to public employment”. In practice, these advisory activities mean that Pittlik has to monitor public work projects: his main task is to check the high-value capital equipment – including tractors, cement mixers and Stihl chainsaws – purchased in the framework of public employment projects.

Although public employment is monitored regularly by several other government institutions, the Ministry of Interior claims that Pittlik’s work requires a level of expertise that other workers of the Ministry do not have. They say this is why they contracted the former car repairman as an external expert.

Official documents provided by the ministry to Direkt36 and sources familiar with relevant monitoring procedures suggest that Pittlik’s work is rather simple. The on-the-spot checks generally comprise taking a look at the machines and their documentation, and then taking photos of each of them. Usually this does not take more than 1-2 hours.

Although the Ministry of Interior claims that it is his professional experience that makes him suitable for the job, in some of his advisory activities Pittlik was assigned to carry out tasks that were not connected to his education or experience. His CV reveals that he graduated from a traffic engineering vocational school and then passed the vocational master exam for car mechanics. As an adult, he took part in a training course on “management techniques” and as a correspondent student he earned a vocational degree as a “Specialized Technical Instructor” at Szent István University.

For several months, however, Pittlik’s task was to look into the employment contracts of public workers, and inquire about the general conditions of public employment projects.

The Ministry of Interior has not answered any questions about the relationship between Pintér and Pittlik. All Pittlik told Direkt36 about Pintér was: “I know him, of course I do”. He added, however, that he was not willing to answer any questions about the minister, nor his own work done for the Ministry of Interior. He stated that he did not consider himself a public figure.

One ex-colleague of Pittlik told Direkt36 that Pittlik and Pintér got to know each other at the AFIT repair shop. “Back then, Pintér was a policeman, and Pittlik was a young car mechanic,” the source told Direkt36, who spoke about the relationship between his ex-colleague and the minister of interior on the condition of anonymity. Several former employees of AFIT confirmed that Pintér frequently visited the garage and knew Pittlik.

Béla Pittlik lives in Őrbottyán, a town about 35 kilometres northeast of Budapest, where several locals asked by Direkt36 have heard that he has a good relationship with Pintér. Pittlik had been a member of the local municipality and held the office of deputy-mayor between 2006 and 2010. One of his former colleagues at the municipality said that Pittlik himself did not tend to speak about his good relationship with Pintér, but “such information came from his friends.” A shop assistant in a store near Pittlik’s house in Őrbottyán said that in the town it is “an open secret, that he and Pintér are good buddies.”

The most direct connection between Pintér and Pittlik is a company called Perpetuum Mobile Ltd. which runs a Peugeot car dealership in Vác. In this firm, Pittlik and Pintér’s wife have been business partners since its foundation in 1992. Last year, the company opened a new branch at Angol Street 34 in Budapest’s 14th district, where two companies owned by Pintér’s daughters are also registered.

Since 2009, the Peugeot car dealership has almost tripled its net revenue, to HUF 622 million (EUR 2 million in 2013), though it has generated only modest profits. In 2013, the year with the latest business figures available, it had profits of HUF 7 million (EUR 22,500).

Pittlik is one of the managing directors of the company, but business records show that he does not receive any money for holding this position, nor has he received any dividends in recent years. However, since January 2012, he has had a new source of income. This was the first time when the “Public Employment and Logistics Department” of the Ministry of Interior contracted him as an advisor.

He arrives with a government car

It is the Ministry of Interior’s Deputy State Secretary for Public Employment that assigns Pittlik which public employers to visit in a given month. These can be municipalities but also forestries or water management associations that employ public workers. According to the official reports, Béla Pittlik travelled to these sites several times by a car provided by the government.

Upon verification and certification of the completion of his tasks, Pittlik receives a gross salary of HUF 350,000 (EUR 1,100) a month.

Last November, for example, he received his payment for having controlled four local governments in Baranya County. Pittlik visited one of them, Pécsvárad, on November 10. He had called the local government a few days earlier, and he took a look at four pieces of high value equipment that were stored behind the local government’s building. He checked the inventory number, the serial number and the device number of each device and established whether they were correctly registered. He noticed that some inventory numbers were missing from the machines, then he wrote a report on this. Then he took a photo of the four machines and left.

That same month, Pittlik carried out three similar on-the-spot checks in Baranya County: in Mecseknádasd, in Aranyosgadány and in Magyarmecske. Although these settlements are rather close to each other (the distance between Mecseknádasd and Pécsvárad is 12 km, and it is 27 km between Aranyosgadány and Magyarmecske), Pittlik travelled from Pest County to Baranya every week (always on a Monday) to visit the towns separately. The official documents of the Ministry of Interior show that he received his stipulated gross wage of HUF 350,000 for this job.

Béla Pittlik wrote monthly reports on his work, to which he attached the pictures taken of the machines and the results of the inventory control (in some cases, calling the attention to minor flaws in the registration). He also shared some of his personal experiences. For example, in December 2012, after having monitored 56 settlements over the year, he came to the conclusion that the use of new equipment was beneficial to the life of municipalities. “They are able to give work for more and more unemployed people, that way more and more people can return to the labour market; with the newly bought equipment they can maintain villages and towns easier, make them nicer (for example, they keep ditches, pavements and parks clean) and this helps their sustainable development,” Pittlik wrote in the report.

He did not check everything

“He was very easy-going, communication went well. Not long ahead of the on-the-spot check, Pittlik told us personally that he would come. We employ 460 public workers nationwide, we pulled together the employment contracts and job descriptions of all of them”, said Balázs Lutár, the coordinator of social programs of the Reformed Church Aid. Pittlik spent one hour at the organization’s central office in Budapest, and he looked randomly into some of the documents. “He asked in what positions the employees worked, if the public employment program was lacking anything. He did not go through each of the documents one by one, it would have taken a lot more time”, said Lutár, adding that even without Pittlik’s visit, they would not have stayed unchecked. Their program is regularly monitored by the Capital’s Employment Centre.

The procedure was similar at the Maltase Charity Service. According to Emília Morvai, who works at the Service, their “administrative obligations are very strict towards the employment centre; if something is not in order, it will be discovered by them”. Pittlik’s control at the Maltase Charity Service took 1.5 hours. “He went through the documents, the employment contracts, and in the meantime we were talking about our experience. This was only an administrative monitoring. If there were more in-depth conversations about our programs, that would be interesting,” said Morvai.

According to the Ministry, Béla Pittlik’s work “closely complements” these controls and they count on his work in the future as well. “The Ministry of Interior has never had any professional or human concerns with Béla Pittlik. The ministry is satisfied with his work,” said the ministry, which signed a new contract with Pittlik at the beginning of the year, lasting until 30 June 2015.

For information on companies, we used the databases of Opten and Ceginfo.