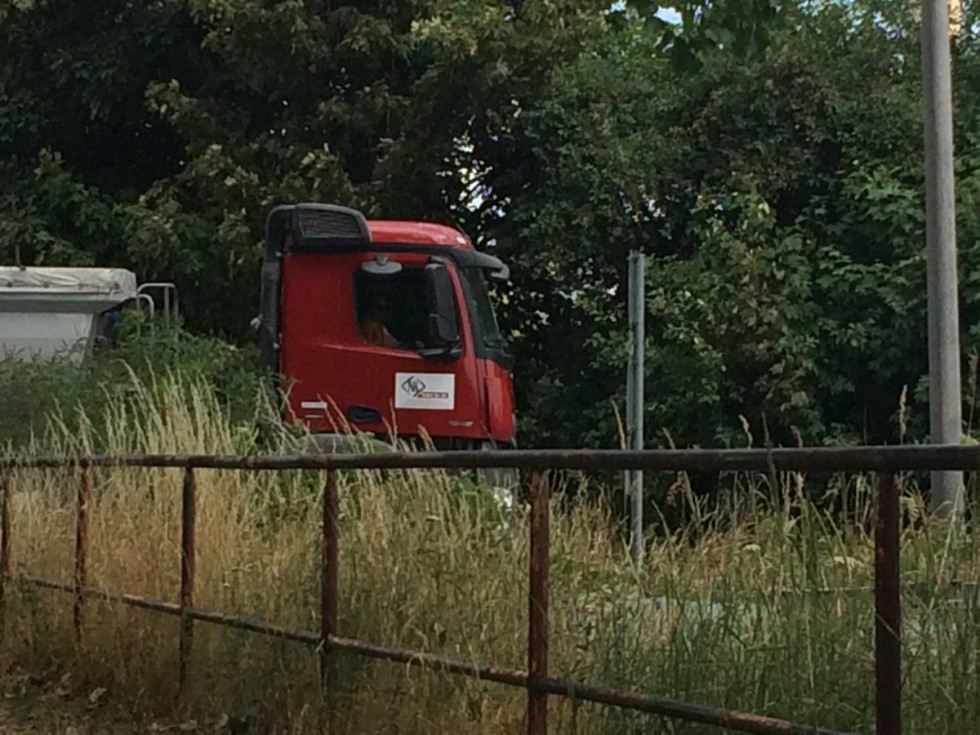 One of Hungary’s oldest thermoelectric power plants, the Oroszlány Power Plant, stopped operating over a year ago, but when we visited its site on a hot July day, it did not seem abandoned at all. Trucks kept arriving to its entrance, most of them coming from the freight company of the prime minister’s younger brother, Áron Orbán.

With logos of Nehéz Kő Ltd. on their side, the trucks disappeared from sight not far away from a small hill, behind which there is a land rehabilitation work in progress. Worth nearly 2 billion forints (6.5 million euros), the project aims to return the land to its former state, after it was damaged by the power plant’s activity. Part of the materials needed for the project are supplied from the mine of Orbán Viktor’s father, Győző Orbán.

The businesses owned by the members of the Orbán family, dealing with mining, transportation and manufacturing of building materials, have shown a spectacular growth in recent years, reaching 4-5 billion forints (13-16 million euros) of revenue annually. Direkt36 has revealed in previous articles that the Orbán companies’ involvement in several state projects, including motorway, railway and sewerage system constructions, has contributed to their outstanding performance. The companies participated as suppliers in the projects, delivering building materials.

In 2001, during his first term as a prime minister, Viktor Orbán explicitly asked his father not to sell materials for large-scale state funded projects carried out that time. This June, Orbán told Direkt36 that he still considers it important for his father not to participate in public investments. Orban’s answers, at the same time, also suggests that he thinks – as opposed to his earlier statements – that if his father does not participate in the project as a main- or subcontractor but as their supplier, that is not problematic. He said this in spite of the fact that suppliers also receive public money, similar to higher level participants of state projects.

The operator of the power plant and the companies that carry out its rehabilitation project refused to tell us how much money is paid to the Orbán family’s businesses. We also asked Dolomit Ltd. and Nehéz Kő Ltd. about their involvement in the project, but they did not respond our questions either.

The power plant in Oroszlány – located an hour’s drive from the capital Budapest – produced energy from the 1960s until the end of 2015, mainly using brown coal mined in the nearby mountains. The waste produced during its operation was disposed on an almost 200-hectare land next to the power plant. During the currently ongoing rehabilitation project this waste is mixed with materials deriving from mining activities, then new vegetation is planted on top of this covering layer.

The operator of the power plant, the state-owned Vértesi Erőmű Ltd., is responsible for the closure of the landfill and for carrying out the rehabilitation of the land. The rehabilitation project was divided into various phases, and the main contractors were chosen via public procurement.

The currently ongoing second phase of the project – won by a consortium of Terra-Log Ltd. and MENTO Ltd. – was launched in May. According to their publicly available contract, 34 hectares of land will be rehabilitated until the end of January 2018. For the covering layer, almost 250 thousand m3 of material – by-products of mining activity, humus soil and turf, for example – is planned to be delivered from other locations.

Shortly after the May publication of our first article about the Orbán family’s involvement in state projects, we received a tip saying that the company of the PM’s father participates in the power plant’s rehabilitation project. Vértesi Erőmű Ltd. confirmed that Dolomit Ltd., majority-owned by the PM’s father, delivers material for the rehabilitation project, from its mine located in Gánt, 30 kilometres from the plant. Vértesi Erőmű Ltd. did not answer our questions about the exact type, quantity and price of the materials supplied by the Orbán-company.

When we visited the project site on the morning of 5 July, in an hour we saw more than ten trucks of Nehéz Kő Ltd. arriving to the power plant’s site. Nehéz Kő Ltd., established by Viktor Orbán’s father and two brothers , and currently solely owned by the PM’s younger brother Áron, has also produced spectacular growth in recent years. The cargo of the trucks could not be seen, but sources familiar with the project – who asked for anonymity – told Direkt36 that Nehéz Kő Ltd. delivers Dolomit Ltd.’s crushed stone for the rehabilitation project.

Vértesi Erőmű said that besides Dolomit Ltd., five other companies supply material for the covering layer used for the rehabilitation. “For the sake of security supply, the materials are delivered from 6 mines that are logistically and economically advantageous,” Vértesi Erőmű Ltd. told Direkt36.

Among the five companies named as suppliers, only one confirmed over the phone to Direkt36 that it indeed participates in the rehabilitation project, while two companies did not want to answer our question. Two companies said that, as opposed to the information given by Vértesi Erőmű Ltd., they have not delivered materials for the covering layer used for the rehabilitation.

We wanted to know how much money the PM’s father receives for supplying materials for the project. However, neither the suppliers, subcontractors and main contractors, nor Vértesi Erőmű replied.