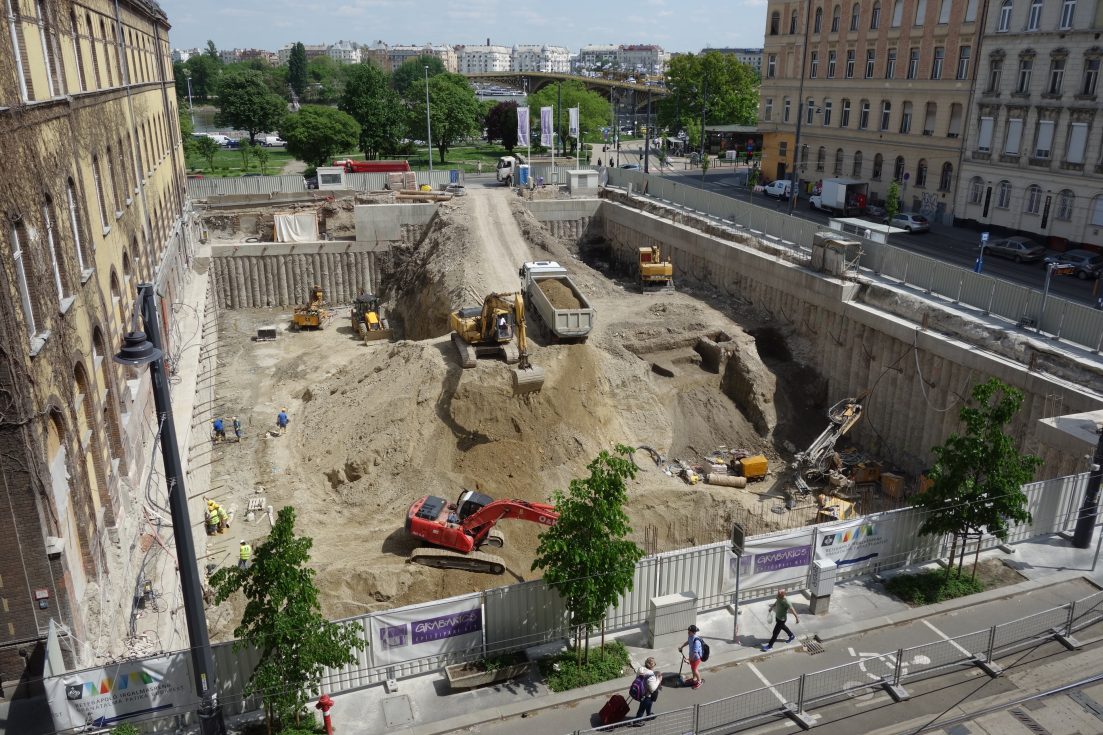 Two thousand-year-old memories of Hungary’s capital were recently unearthed in the heart of Budapest, close to the banks of the Danube River. Remains of a Roman wall, a medieval well and hundreds of coins from the time of Matthias Corvinus were found in the courtyard of the Buda Hospital of the Hospitaller Order of Saint John of God, which is currently being renovated.

The results of the excavation were proudly reported at the beginning of this year not only by archaeologists, but also by the main contractor of the construction, Grabarics Kft. “We are glad that this construction brought to surface such objects and knowledge that might have never been unearthed if the hospital yard had remained in its old condition,” the company wrote in a statement.

However, it was not reported that a similarly valuable site had already been destroyed during construction two years earlier in an area just a couple of meters south of the hospital yard.

Here, at the corner of Frankel Leó Street and Vidra Street, as part of the hospital renovation, a new wing was erected with a three-storey underground garage that required the excavation of a more than 15-meter-deep pit. Prior to that, an archaeological excavation should have been carried out on the entire construction site, but in the end it was not possible: by the time the archaeologists started working in the spring of 2018, “part of the area had been excavated by heavy machinery,” said dr. Orsolya Láng, Deputy Director General of Archaeology of the Budapest History Museum. Thus, an area of hundreds of square meters was lost, which could have been an “archaeologically organic continuation” of the artefacts recently unearthed in the courtyard of the hospital.

The civil engineering works of the project were carried out by Bauer Magyarország Kft. – the company that was recently commissioned for earthworks related to the expansion of the Paks nuclear power plant.

To our question, however, Bauer wrote that during the hospital investment, their company “had no obligation to ensure the exploration and preservation of the archaeological material,” this was the task of the investor.

Neither the Hospitaller Order of Saint John of God, nor the competent government office, nor the main contractor Grabarics Kft. answered our question about who is responsible for the damage caused during the construction.

Not just a few pieces of stone, but a highly protected archaeological site

The district of Felhévíz, where the Buda Hospital is located, was a densely populated area already during Roman and medieval times. From this location, always “valuable archaeological treasures can be unearthed,” according to the experts of the Budapest History Museum. This is why they think it is “very unfortunate” that a full excavation could not take place in the vicinity of the hospital.

Protecting such finds is not only important for archaeologists and historians – international conventions and the current Hungarian legislation also oblige everyone to do so. “Our cultural heritage is an irreplaceable, unique and non-renewable source of our country’s past and present”, and “any damage to such values (…) causes irreparable loss”, writes the Act on the Protection of Cultural Heritage and its justification.

The building permit for the renovation and expansion of the also emphasized that the investment takes place on a highly protected archaeological site. It was stipulated that archaeological excavations should be carried out on the entire area affected by the earthworks, and the archaeological finds should be preserved, and, if possible, also presented on the site.

However, when the new wing of the hospital was built, the heavy machinery were quicker archaeologists: much of the approximately 3,000-square-meter building area had been excavated before experts could have started to work there. Upon noticing this, archaeologists were only able to start excavation in a smaller area (on 500-600 square meters) in April 2018. In two months, a medieval layer, a medieval kiln (with 14th-century finds in it), a Roman pit and prehistoric finds were also unearthed here, said dr. Orsolya Láng.

Archaeologists planned to continue excavation in June, in a previously untouched area of about 200 square meters, under the ramp leading to the construction site. However, they were halted once again: by the time the archaeologists returned, machines had already demolished this area.

(The video shows from 2:50 the demolition of the area already excavated by archaeologists. Later, the unexplored part under the ramp also disappeared.)

From hospital civil engineering to groundworks in Paks

In 2016, the government declared the renovation of the Buda Hospital a priority investment for the national economy. Soon, without consultation with the residents of the area, construction began, which has since taken place in two phases.

Grabarics Kft. is the main contractor of both phases of the project. The company’s income has grown steadily in recent years, supported by a number of state project, including the construction of a swimming pool in Gödöllő, a handball hall in Dunaújváros, and hotels in Tokaj and Lake Balaton.

During the renovation of the hospital, one of the subcontractors of Grabarics was the German-owned Bauer Magyarország Kft., which performed the civil engineering tasks of the construction next to Vidra Street. Bauer has been carrying out civil engineering work in Hungary since the 90s, its customers include regular public procurement winners such as Strabag, Market Zrt., and Mészáros és Mészáros Kft.

Bauer’s income reached 6 billion forints (17 million euros) in 2018, and it has recently received even bigger orders: as Direkt36 recently reported, Bauer will carry out groundworks related to the expansion of the Paks nuclear power plant for a total of 217 million euros.