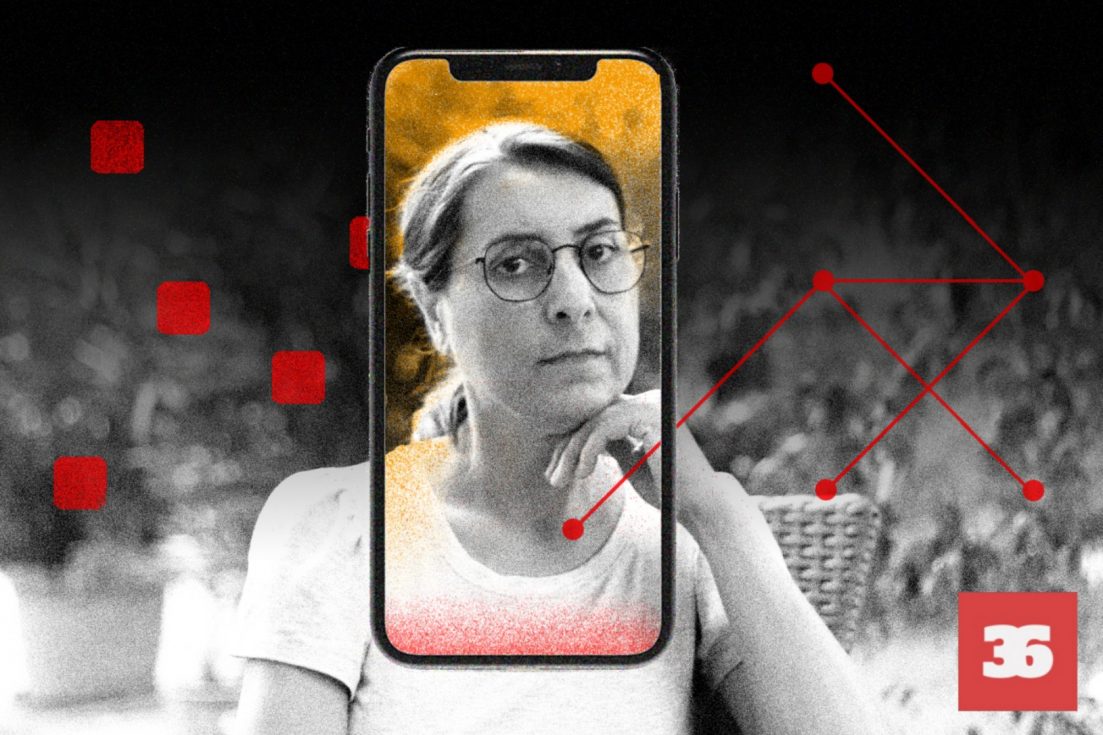 One of Hungary’s most experienced crime reporters, Brigitta Csikász, who also investigates corruption cases, was spied on with Pegasus from April to November 2019 for more than seven months. Forensic analysis of the journalist’s phone identified clear traces of the Israeli spyware.

The device was examined by Direkt36 with the help of Amnesty International’s Security Lab because Csikász’s phone number also appeared on a leaked database of targets selected for surveillance by certain customers of Israeli spyware company NSO Group. Being on the list does not necessarily mean that the mobile phone belonging to that number was successfully hacked with Pegasus. However, AI’s forensic analyses have confirmed this suspicion multiple times already, and this was also the case with Csikász.

“I’m an investigative journalist mostly covering the justice system and crime,” Csikász told Direkt36, adding that she had already received warnings years ago that she was being monitored by authorities. At the time of her surveillance with Pegasus, she worked for Atlatszo.hu, and currently reports for Blikk on abuses of power or suspected corruption by Hungarian politicians and authorities.

During her surveillance, for example, she wrote about misuse of EU funds. In some cases covered by Csikász, OLAF, the European Anti-Fraud Office had already reported a series of problems to Hungarian authorities, which, despite receiving these clear signals, did not go after the cases to find out what happened.

In Direkt36’s previous article on the secret surveillance of Hungarian journalists, media company owners and people in their orbit we also briefly described Csikász’s case. Back then, however, the journalist still asked not to be named and we also could not examine her mobile phone. However, she changed her mind after seeing the waves created by the series of articles as well as the investigation launched into the Pegasus affair by Hungarian prosecutors. “I go on the record because an investigation has been initiated. I think it’s better for me to go public before someone else outs me without my knowledge,” Csikász explained to Direkt36.

There are nearly two hundred journalists worldwide appearing with their phone numbers in the 50,000-strong leaked database of numbers selected for surveillance by NSO’s customers. The list was jointly obtained by Forbidden Stories, a network of investigative journalists and international human rights organization Amnesty International, then analyzed by a consortium of 17 media outlets. From Hungary, only Direkt36 participated in the investigation.

NSO claims to sell Pegasus exclusively to foreign governments and state agencies to fight terrorism and organized crime. However, the identification of leaked phone numbers revealed that the spyware was also used against journalists, human rights defenders, politicians and businessmen from Mexico through Azerbaijan to India.

The Hungarian government did not provide a substantive reply to questions on the monitoring of journalists and political targets. However, foreign minister Péter Szijjártó recently stated that even journalists, regardless of their profession, could be surveilled in secret if they “pose a threat to the security and interests of the Hungarian nation.” However, as Direkt36 described in previous articles, gathering of secret information in Hungary is so loosely regulated that virtually anyone can be put under surveillance for reasons of national security.

We have sent multiple questions regarding Brigitta Csikász’s surveillance to the Hungarian government on Friday, but received no reply.

Meanwhile, NSO founder Shalev Hulio said in response to a question from Direkt36 in an Israeli radio show that if Pegasus was indeed used to monitor journalists in Hungary, it would be unacceptable and the case would be investigated. And if the abuse is confirmed, Hulio claims that their client monitoring Hungarian journalists will be cut off from using their spyware. However, NSO never comments on who their customers are, nor did Hulio answer questions about whether the Hungarian state uses Pegasus.

A forensic analysis of Csikász’s phone showed that for many months, from early April to mid-November 2019, her device was hacked several times with Pegasus. The spyware could access messages, photos and videos stored on the device, or even remotely turn on the phone’s microphone and camera.

Data in the forensic analysis show that there are correlations between the surveillance of Csikász and several other Hungarian journalists. Pegasus often infects phones through the iPhone messaging app, iMessage, by sending messages to the device in a way that goes unnoticed by the phone user. In the case of Csikász, her device was once attacked from the same iMessage account connected to Pegasus, from which the phones of Direkt36 journalists András Szabó and Szabolcs Panyi were also hacked.

Analyses also show that the surveillance of Csikász and Panyi’s phones began one day apart in early April 2019. We asked the Hungarian government if there was any connection between the two journalists’ monitoring, but received no answer to this question either.

While her phone was successfully hacked several times with the Israeli spyware during 2019, Csikász had only worked on one major project at Átlátszó.hu that overlapped with most of the period of her surveillance. At the time, she was working on a series of 12-13 articles in which she presented suspicious cases of alleged misuse of EU funds.

“Articles were published one after another. I can imagine that it attracted some people’s attention when the first one, the second or the next were published. They may have been interested in what the whole thing was about, where it was leading to, ”said Brigitta Csikász. She went one by one to find out how each of the investigations were going, and whether there had been any charges pressed by Hungarian authorities.

These were all cases where OLAF had also been investigating, and to which, for example, people related to minister Antal Rogán as well as the dentist of Prime Minister Viktor Orbán were connected to. Csikász’s investigations revealed that, despite OLAF’s alarms, Hungarian authorities lacked either the will or the ability to prosecute the suspicious spending of EU money.

Brigitta Csikász also compared the dates in her phone’s forensic analysis with her calendar and found other coincidences from the summer of 2019. Her phone was also hacked three times on days when she had meetings for one of her articles, which was about the work of private investigators in Hungary. This piece was eventually published in the fall of 2019, and it was partly about how private investigators may or may not collect information in secret.

According to Csikász, however, it is also possible that her surveillants were not specifically interested in any of her articles. “But just like before, they were curious about my network of sources and contacts,” the journalist said. Csikász also added that she has been working since 2010 with the awareness that her communication can be intercepted from time to time. Because that was the time when she received one of the first ‘friendly warnings’. “I was told that they are eavesdropping on my phone. From that time on, I was aware that it comes with my job that they are watching what I’m doing”, she added.

Over the years, similar suspicions and warnings have only multiplied. Csikász has already told in Direkt36’s previous article that, according to her knowledge, even her  WhatsApp and Viber messages were intercepted. “I always knew that the topics I cover and the articles I write did not always appeal to everyone,” Brigitta Csikász said.

In response to a question from Direkt36, Csikász claimed that she is not aware of any direct impact that her surveillance had on her work. “My sources were mostly aware that it can be the consequence of my job that people could be eavesdropped on. And maybe them too,” Brigitta Csikász said, adding that her sources persisted in spite of all this. “I’ve experienced over the course of my career that a lot of people respect my work,” the reporter said.